I had a quite difficult and disappointing day. No major disaster. But a lot of work, and farther behind than when the day started.

As background – we have received a great deal of snow over the past week.

I had decided to go to town this morning. Somehow since coming back up here after Thanksgiving, I moved “go to town day” from Thursday to Friday. The reason Arthur goes on Thursday is because there is a senior discount at the grocery on Thursdays. The store is often a bit crowded. Since I’m not eligible for the discount, I don’t feel constrained to Thursday. Thus Friday became the day.

I was out the door early, by 8 AM. But that’s because a lot of snow has fallen since I last drove to town. At least a foot, perhaps more.

I felt smart, because I decided to just go ahead and put the chains on. That’s a big hassle, but the road hadn’t been well plowed. I shoveled some of the way in front of the car. But I figured with the chains and a running start I could make it up the rest of the driveway through the snow to the road.

That might have worked, except apparently I did a lousy job putting on the chains – they both got off the tires and next thing I know I was going sideways.

Arthur has a pile of scrap sheet metal (really leftover steel siding from his quonset-style sheds he built) piled alongside the east side of the driveway. And the car ended up more or less on top of that. I was good and stuck.

I had to jack up the car to take off the chains – they were trapped under the tires.

I had to dig out and move all the sheet metal from under the car, as well as some plastic culvert – which fortunately wasn’t damaged.

And I was working on how to get the chains back on when an angel driving a road grader (to plow the road) came by. Pat, who lives at around 10.5 mile, in every way an archetypal sweet grandma, happens to drive a road grader, and does so of her own sweet goodwill to support the south-of-the-inlet community.

Pat had some chains on the grader, which we attached to the front of the Blueberry to extract it from its dilemma. It took a few tries to get the right angle to pull it onto the road rather than throw it down Dean’s driveway – the snow was very slippery and the driveway is steeper than it looks.

Once the Blueberry was on the road – now just graded (plowed) – Pat went on her way and I made the decision to not try to clear the driveway to Art’s place – it was steep with mud and snow now pushed up in banks by the spinning wheels. It was a mess. Instead, I went over to the west lot (73) – the new driveway Richard made last spring – and shoveled out a nice, flat, road-level parking space for the Blueberry. And there she will stay, until I get super ambitious and shovel out the existing driveway, or until some of the snow melts. But at the moment, it’s snowing more.

It was almost noon by the time I got the Blueberry parked in its new spot. I decided not to go into town. Pat was grading the road, but it was still snowing. I expected the road to be treacherous at points into town. And I’m not in dire straights.

An adventure. But not good for my sense of self-confidence or self-sufficiency.

Stuck against the pile of sheet metal. 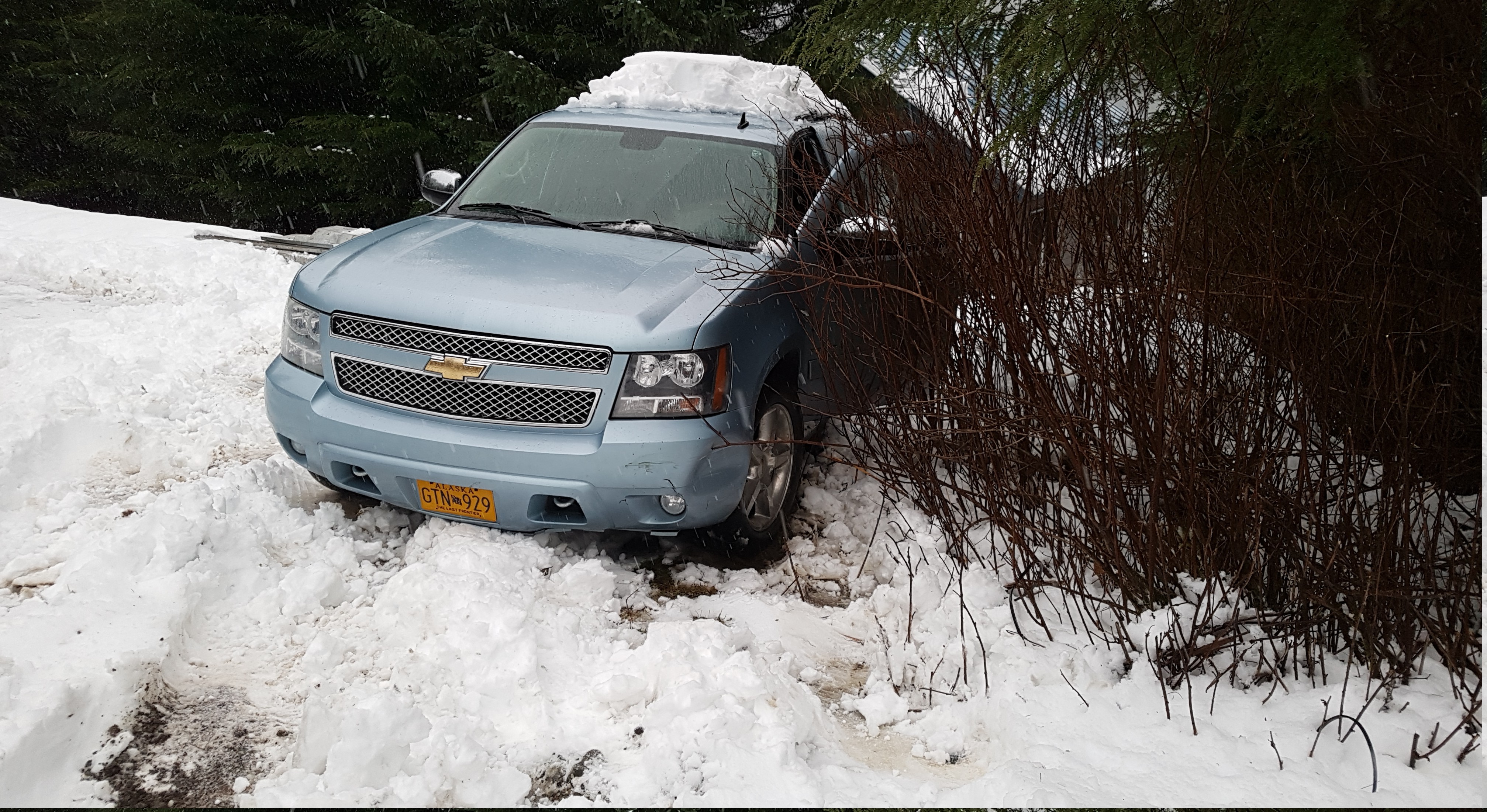 Chains trapped under the tire. 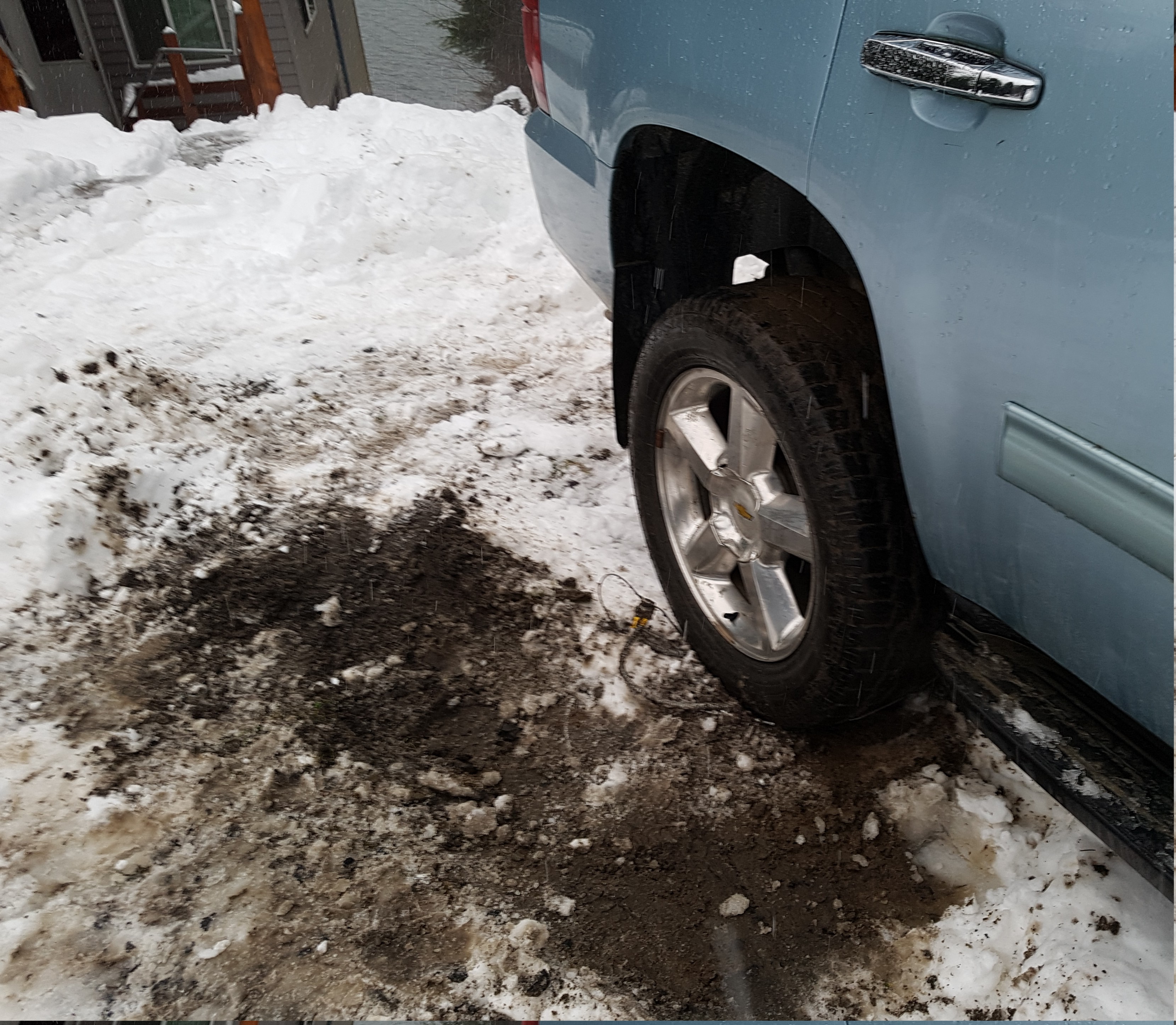 Retrieving the chains using the jack. 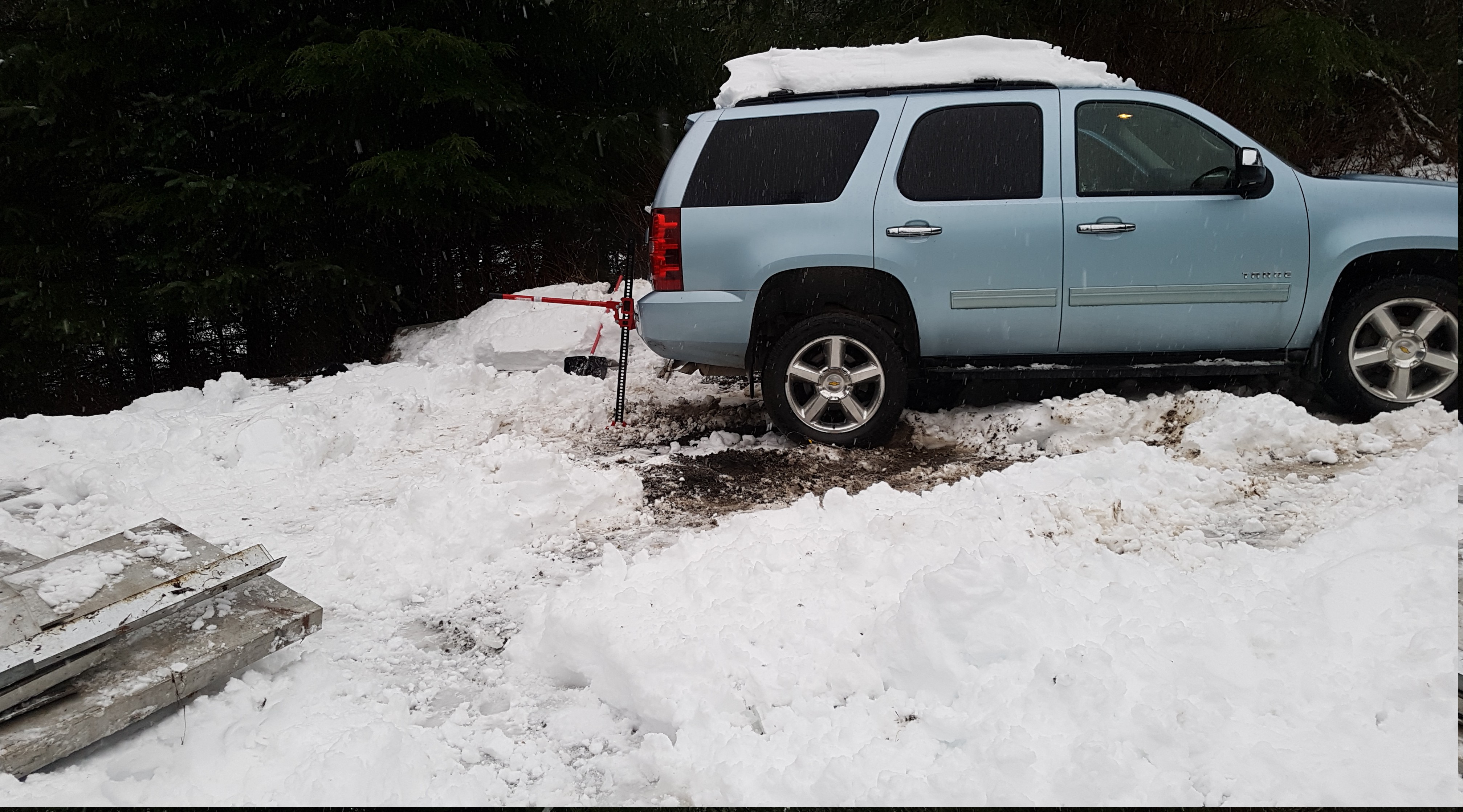 Angel with a road grader. 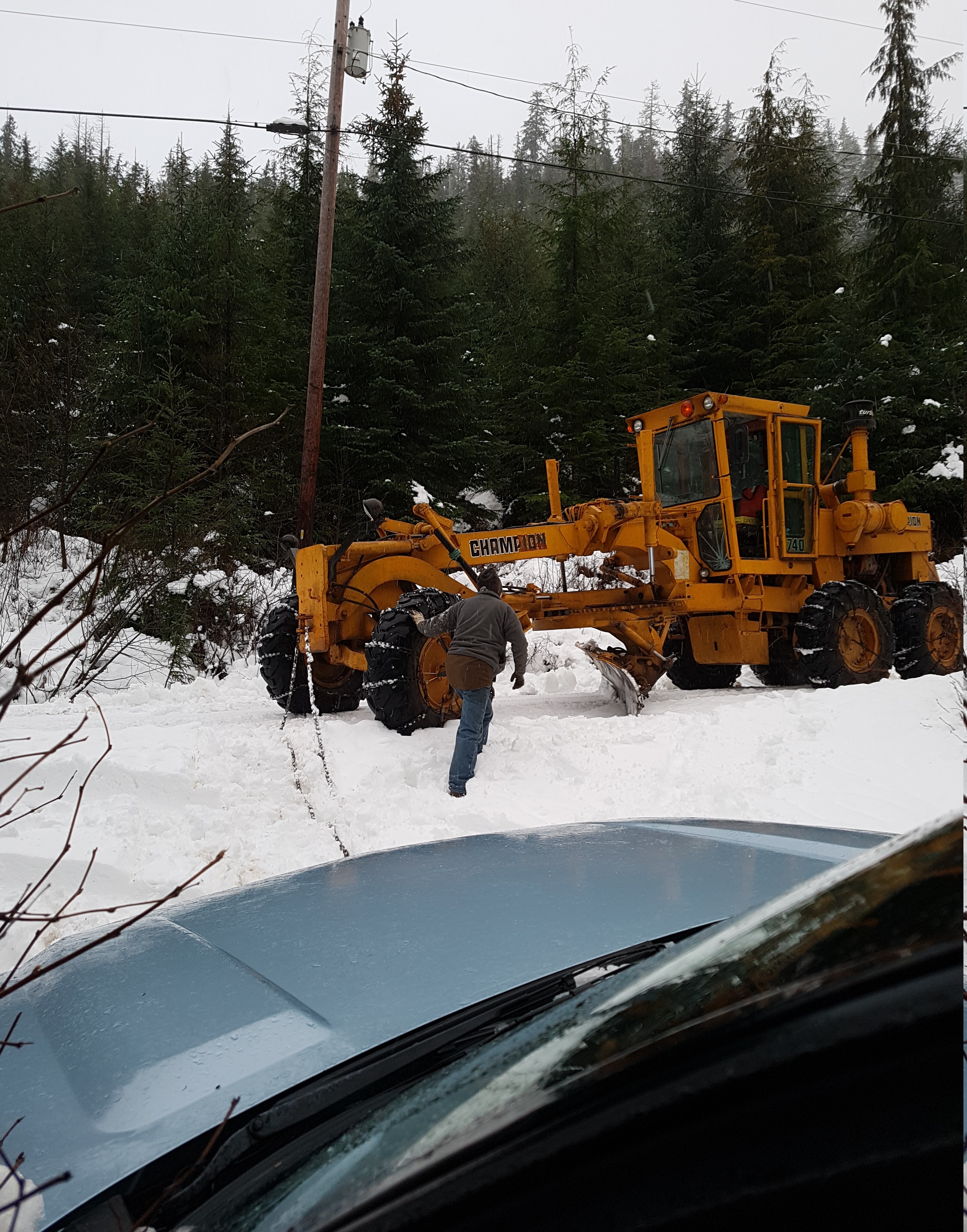 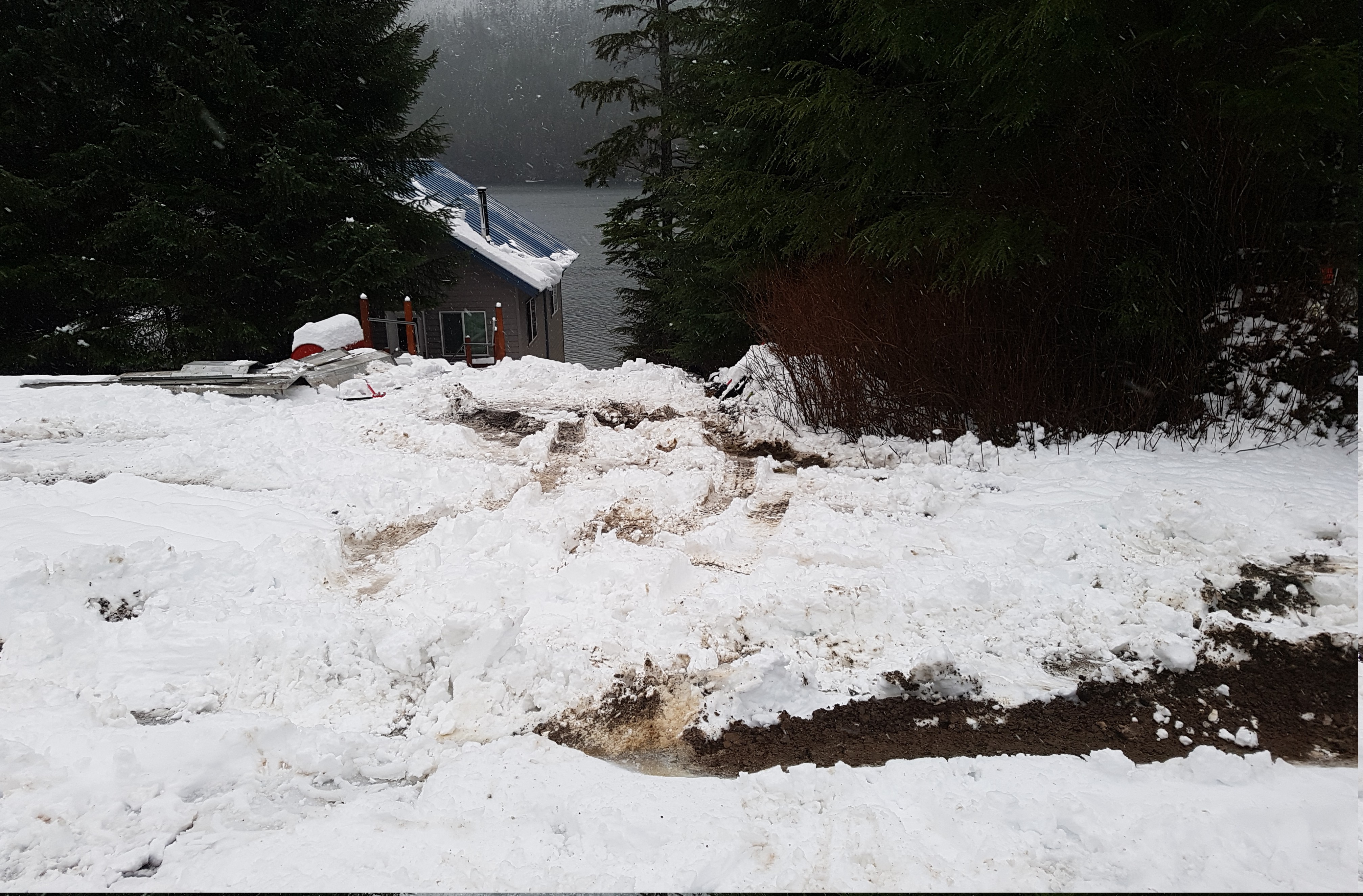 A new parking spot excavated on the west lot. 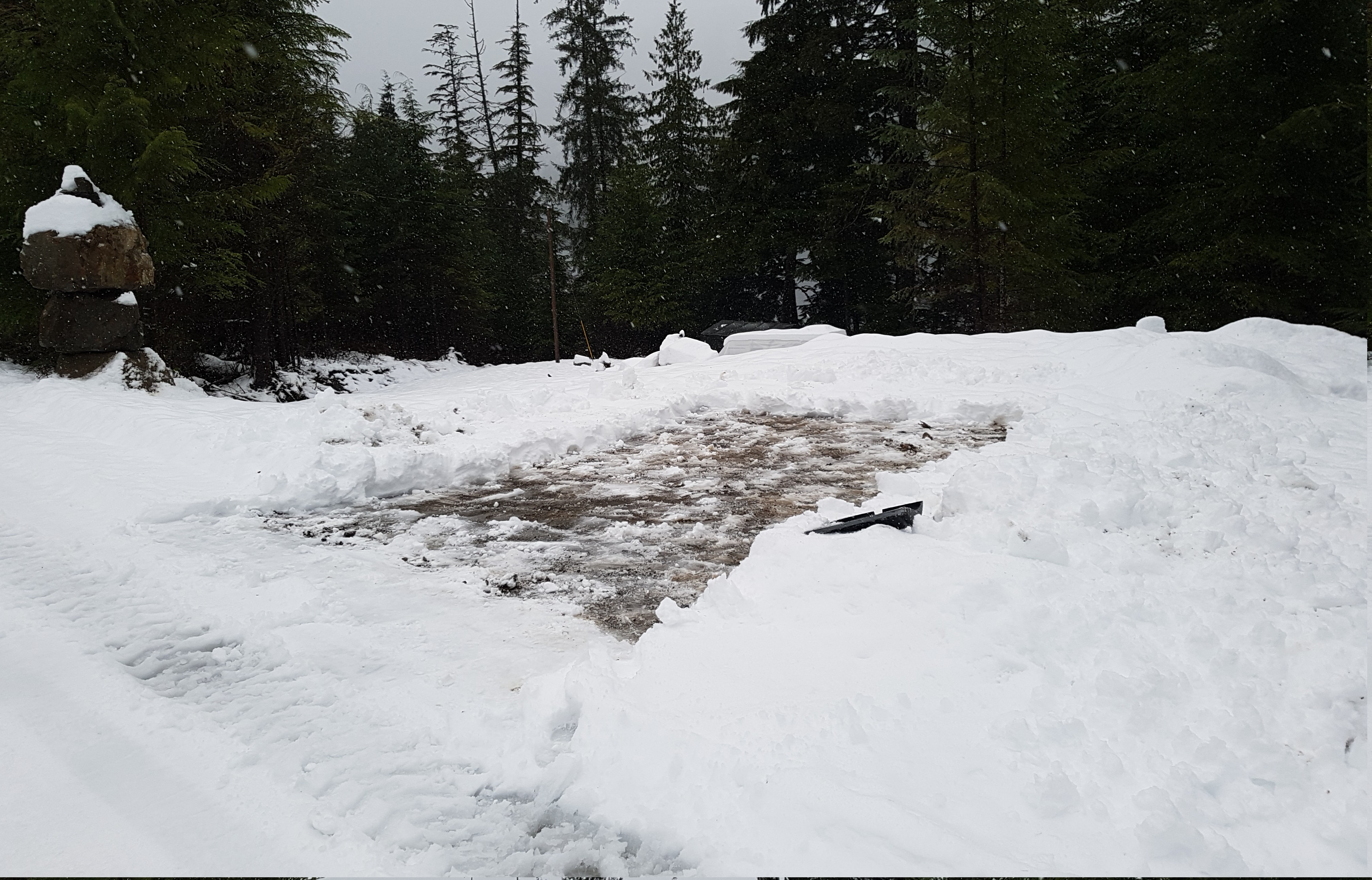