This is a willow tree with a beetle sneaking behind (that’s Keith’s).

When I was a child, Arthur used to pretend to be Mr Grinch. He liked the schtick, and it suited his personality.

Keith’s family is very musical. So they come and perform music. Here is Keith’s sister, Michelle, her husband Tim, and Ky (sp?), who is Keith’s nephew (but not Michelle and Tim’s son). They are performing the song, Mr Grinch. 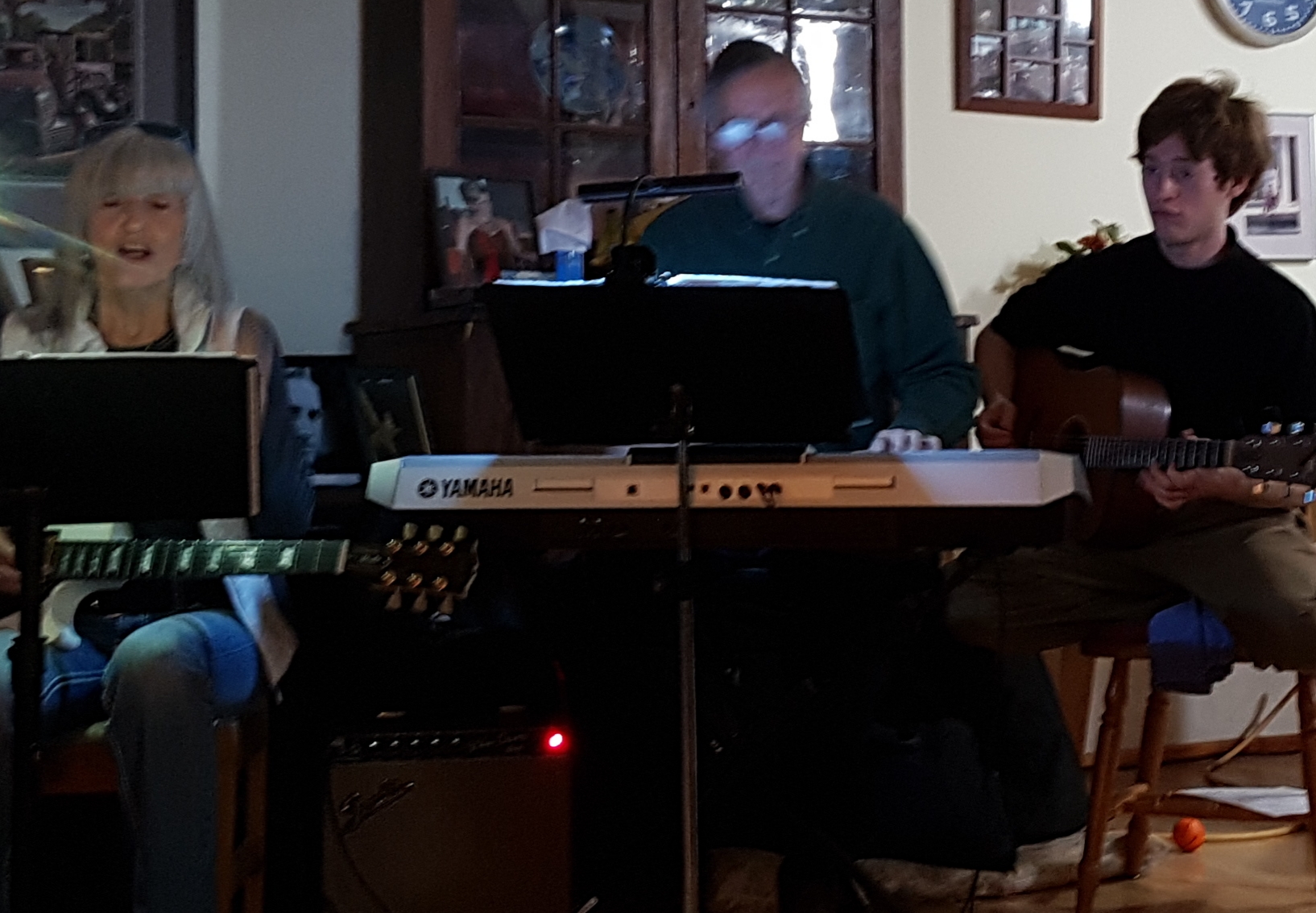 You’re a mean one, Mr. Grinch
You really are a heel,
You’re as cuddly as a cactus, you’re as charming as an eel, Mr. Grinch,
You’re a bad banana with a greasy black peel!

You’re a monster, Mr. Grinch,
Your heart’s an empty hole,
Your brain is full of spiders, you have garlic in your soul, Mr. Grinch,
I wouldn’t touch you with a thirty-nine-and-a-half foot pole!

You nauseate me, Mr. Grinch,
With a nauseous super “naus”!,
You’re a crooked dirty jockey and you drive a crooked hoss, Mr. Grinch,
Your soul is an appalling dump heap overflowing with the most disgraceful
assortment of rubbish imaginable mangled up in tangled up knots!

You’re a foul one, Mr. Grinch,
You’re a nasty wasty skunk,
Your heart is full of unwashed socks, your soul is full of gunk, Mr. Grinch,
The three words that best describe you are as follows, and I quote,
“Stink, stank, stunk”! 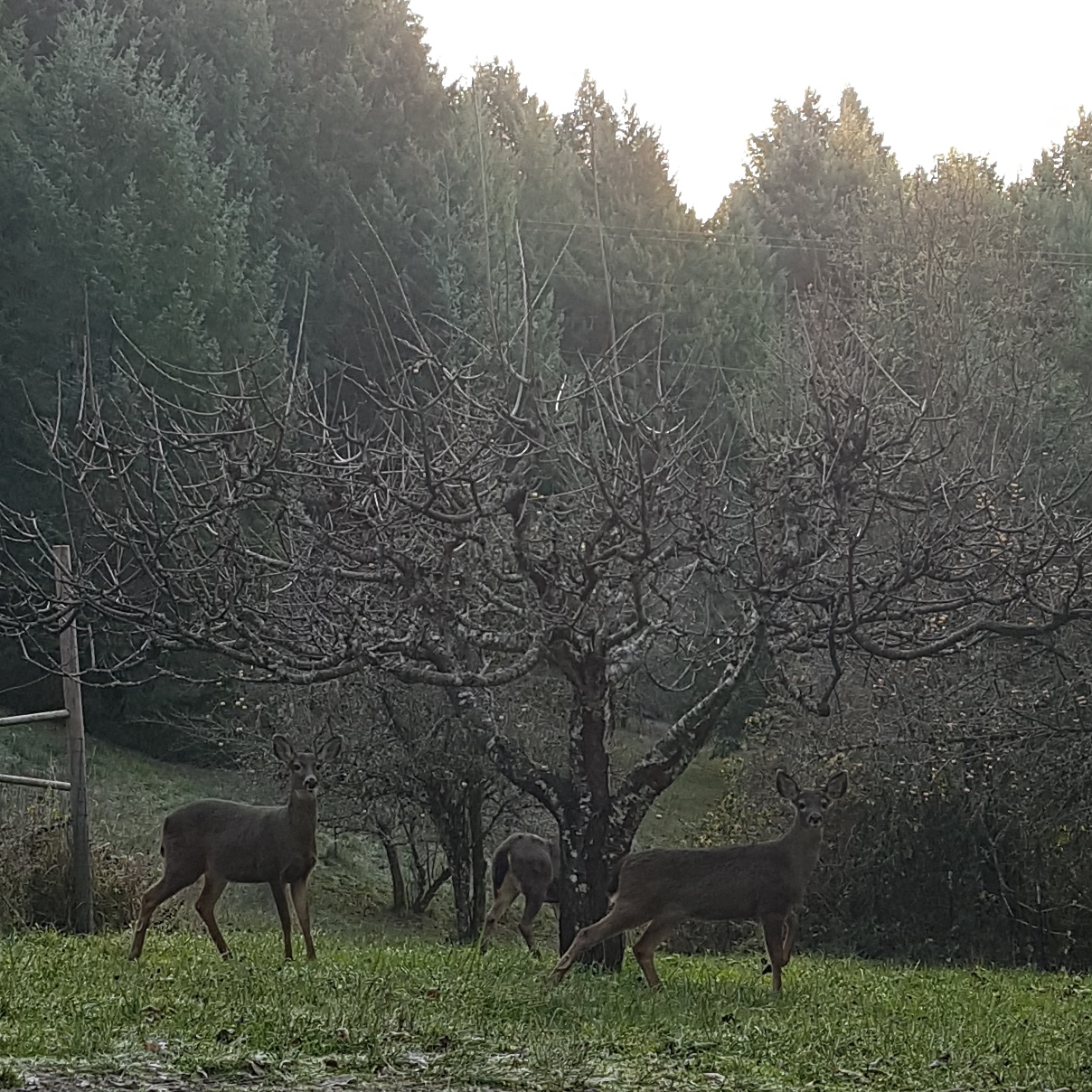 This tree is not feeling successful at meeting life’s challenges, but seems to be just barely hanging in there against all odds.

Our Thanksgiving Thursday was very low-key. Our main, feasting-focused, celebratory event will be on Saturday – that works out better for people’s travel schedules to get here, etc.

So we just had dinner, the four of us: Juli, Keith, Arthur and I.

I am not in the best of sorts, lately. Between the lingering head-cold and the stunning, frustrating and discombobulating news that I am not considered an Alaska Resident by the University of Alaska, I have been feeling physically and emotionally wrecked.

So I was struggling to feel much thankfulness today. Anyway, thanks for reading this, I guess.

We drove into the Portland VA this morning for a specialist appointment for Arthur. It was like “old times,” when Juli and I drove in there so regularly last summer.

Here is a tree.

A tree was seen against a dark sky.

This tree has horses.

Today was the day I needed to go online and register for classes, for the Teacher Certification program I was accepted to last month.

So I went online and did that. It went smoothly enough, until I got the bill.

It turns out University of Alaska has me recorded as a non-resident. This adds a huge amount to my tuition bill – about 300%. And much to my surprise, and against all supposition and against all intuition, I am, in fact, a non-resident by UAS standards – their standard is two years, not one year like most things of this sort that I’ve dealt with or known about.

I am not going to enroll at such a premium to my tuition.

This tree is behind Juli and Keith’s camper-trailer, which is where I’m staying as a kind of guest room.

I confess that despite being on this Thanksgiving holiday trip and staying at Juli and Keith’s, I remain somewhat under the weather. So I’ve been pretty low-productivity.

Here is a tree (or several) from a walk up to the tree farm. 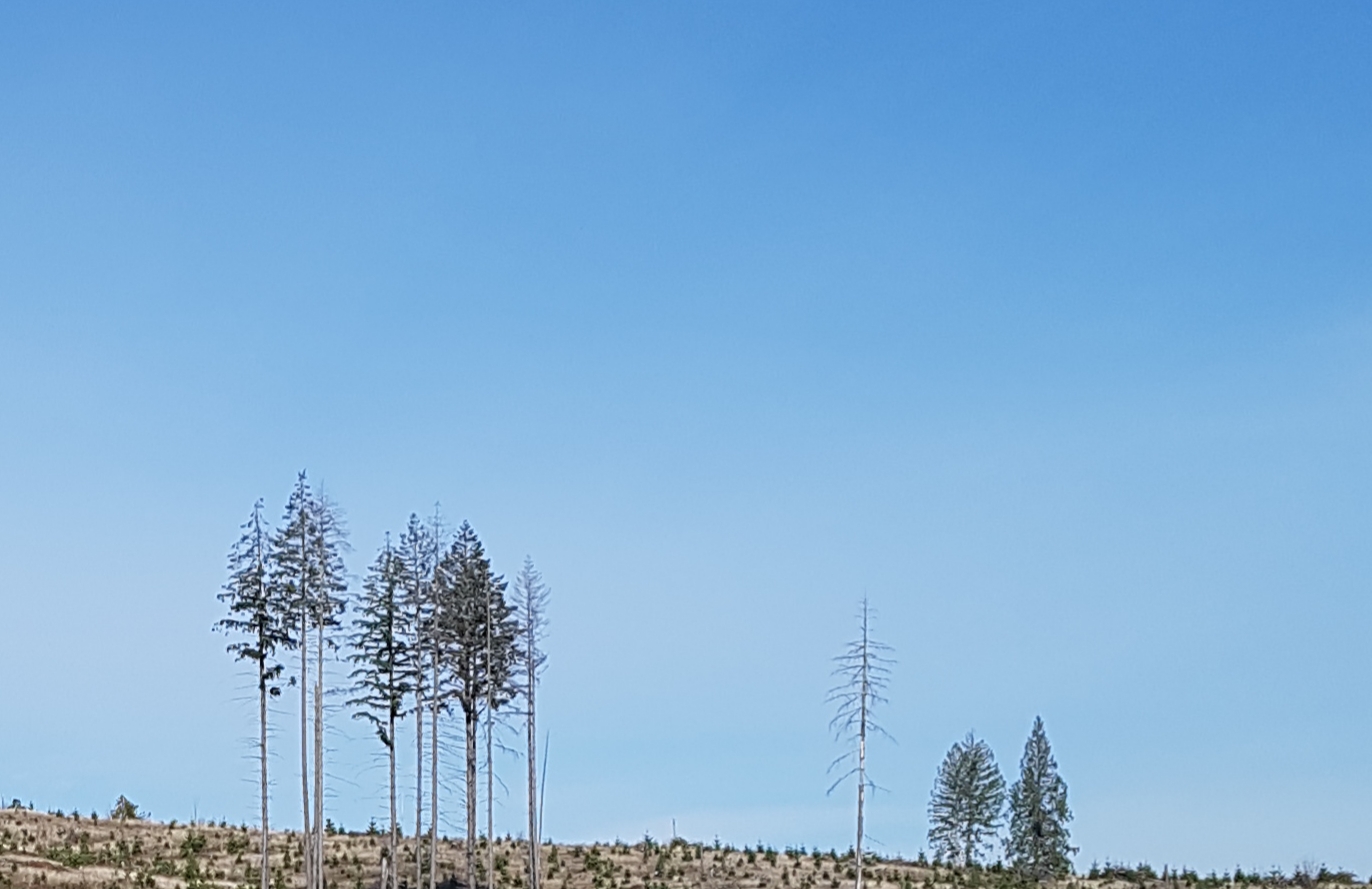 Being at Juli and Keith’s here in Oregon, of course we took a walk up to the tree farm. There are trees to be seen. 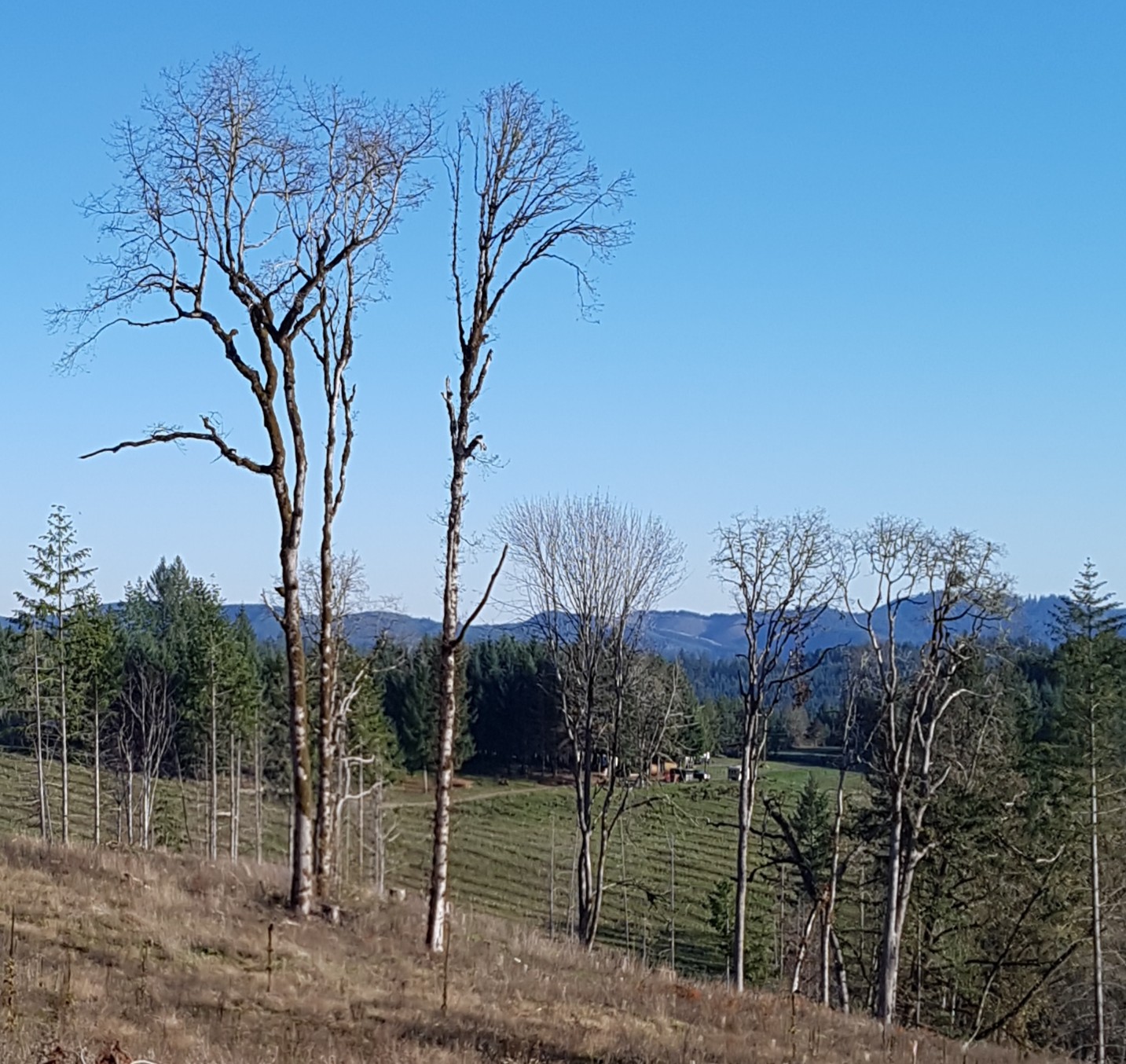 This is a tree at Juli’s house, in the morning. So that’s where I am.

As seen from the ferry crossing over to Ketchikan: the tree is a bit hard to make out – it’s on the bit of land in the lower left of the picture. There is a tugboat towing a fishing boat in front of that bit of land, and in the upper right, a floatplane. So it all seemed very Southeast Alaskan. 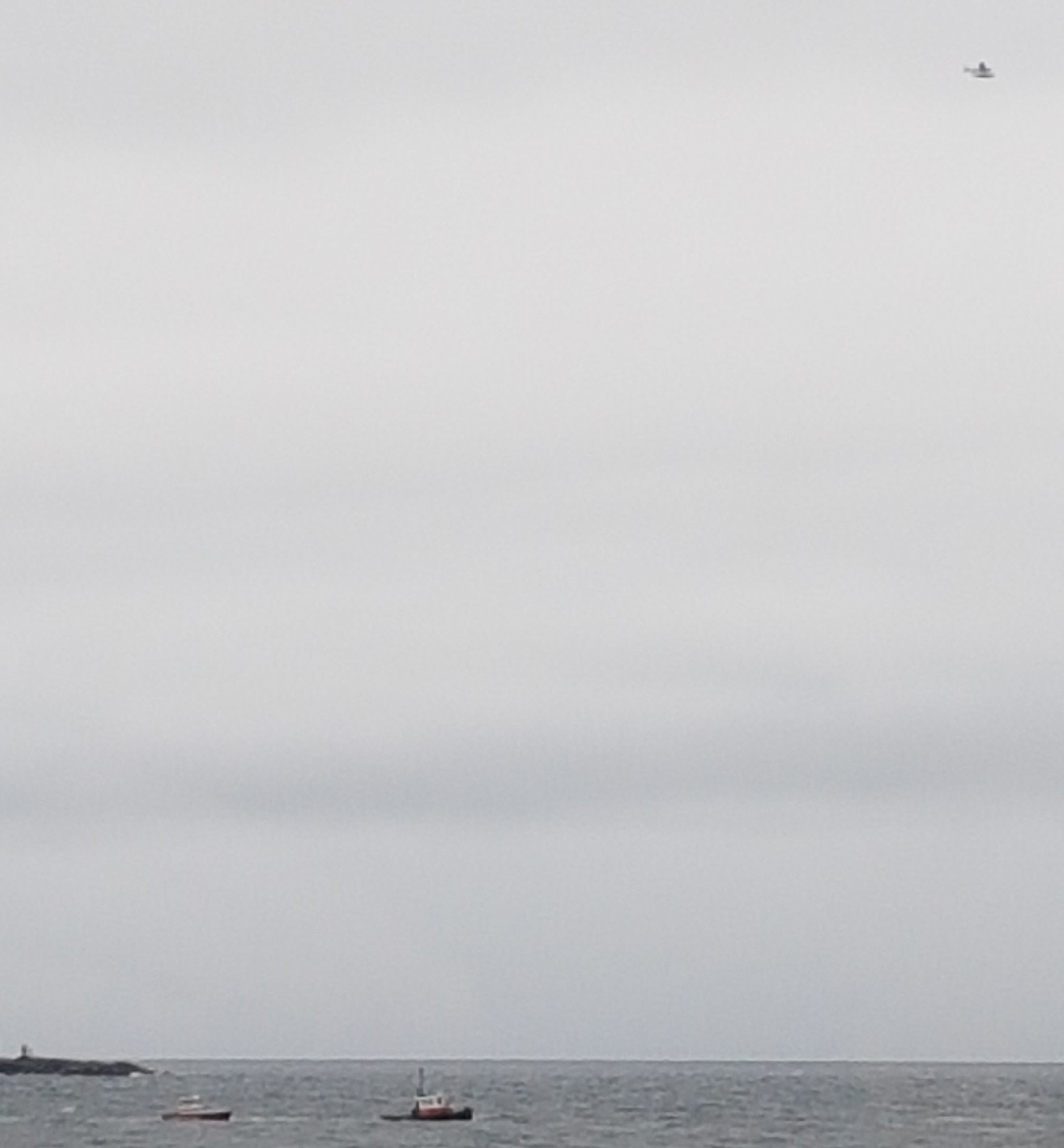