Believe it or not, after all of last night, we decided to go out fishing today. Mark wanted to go again, and is only here for two more days.

Tired as we were, we boated all the way out to Ulitka (“Tree”), at the north end of Noyes Island. We caught a rather humongous lingcod, but only one pink salmon and no coho or halibut, which are Arthur’s preferred catches.

Here is a daily tree, from last night – taken by Amy. 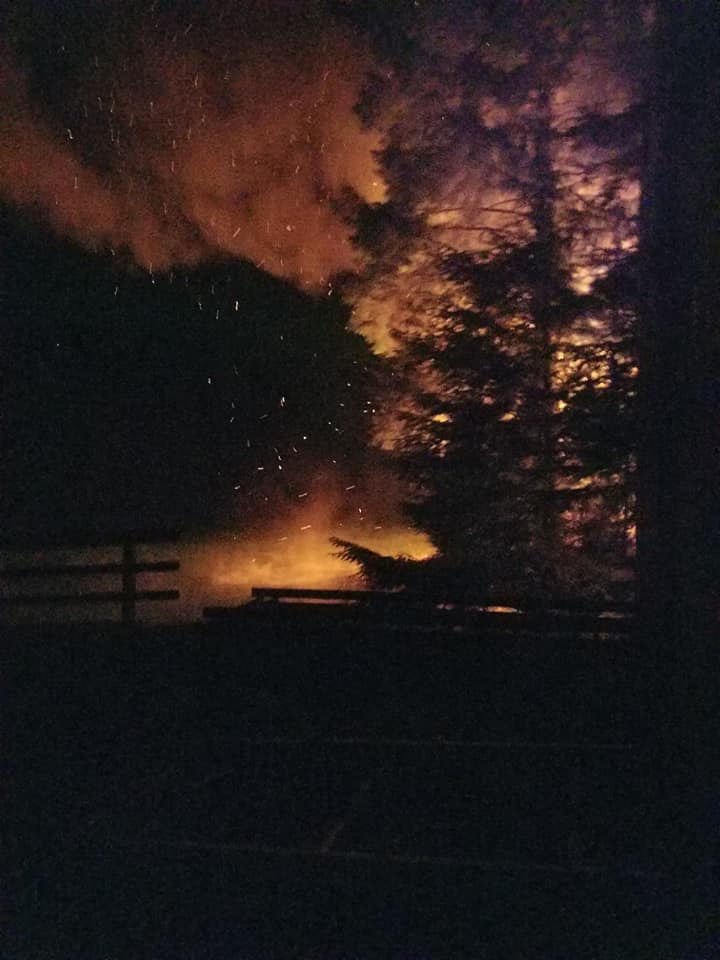 The neighbor’s house burned down last night. It’s still smoldering, at 6 AM.

It was scary. A bit after midnight, Dean (the neighbor, not the same Dean as recently mentioned who is Arthur’s friend) knocks on our door and says, “Call 911, my house is on fire.” The next 5 hours are a blur. Here is a picture of the house, at about 1 AM: 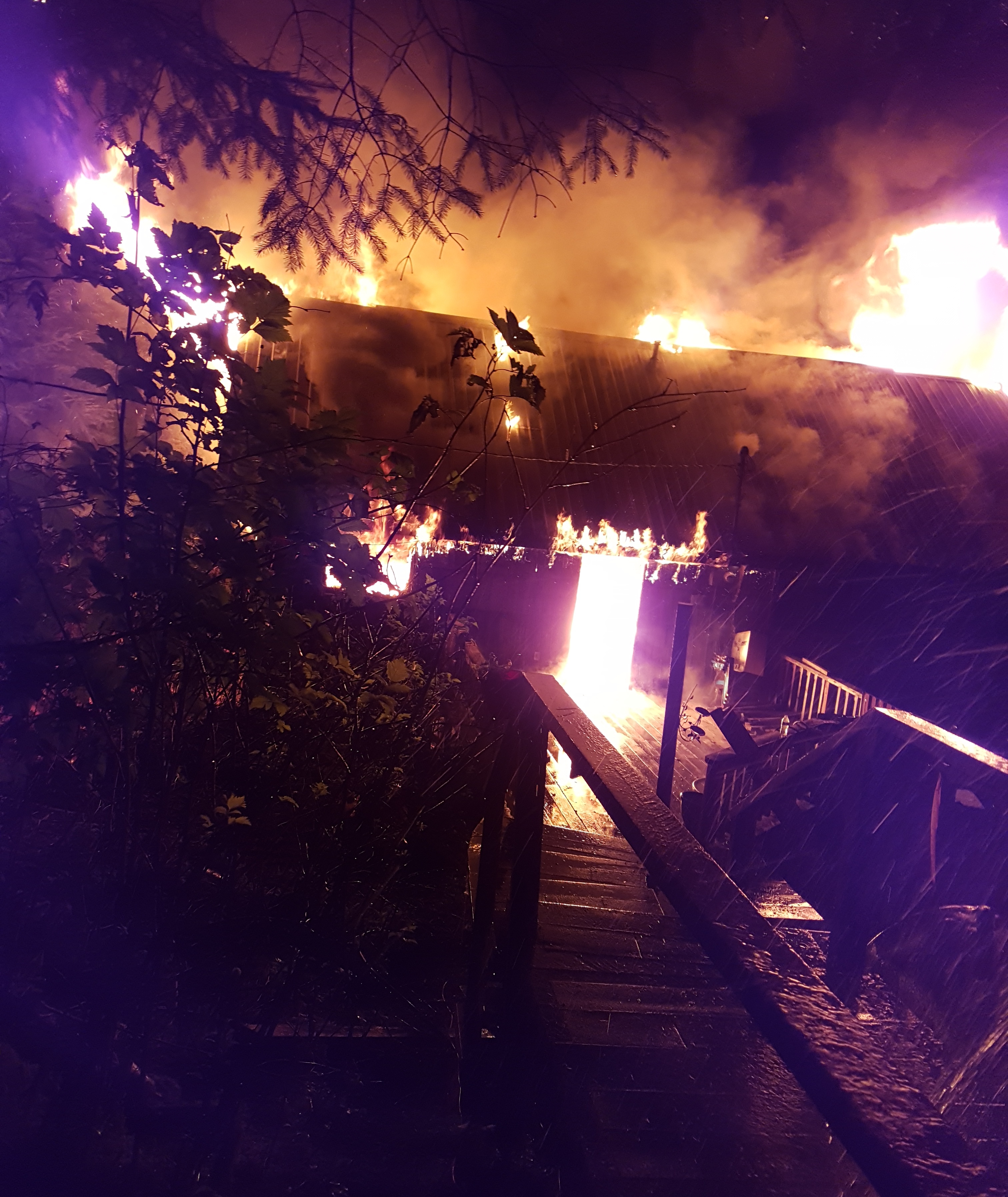 This house was here before Arthur moved here – it’s one of the oldest houses on all of the Port Saint Nicholas Road.

We put our hoses on and tried to prevent the fire from burning into the trees west of the house – because our house (where Arthur and I are) is only 50 feet away, through some trees, to the west. And the trees closest to Dean’s house were burning. Here’s a picture from Arthur’s dock, at around 3 AM, looking back toward shore. You can see how close Dean’s house is to ours. That speck of light in the dark on the right side of the photo is someone with a flashlight at the eastern wall of Arthur’s house. 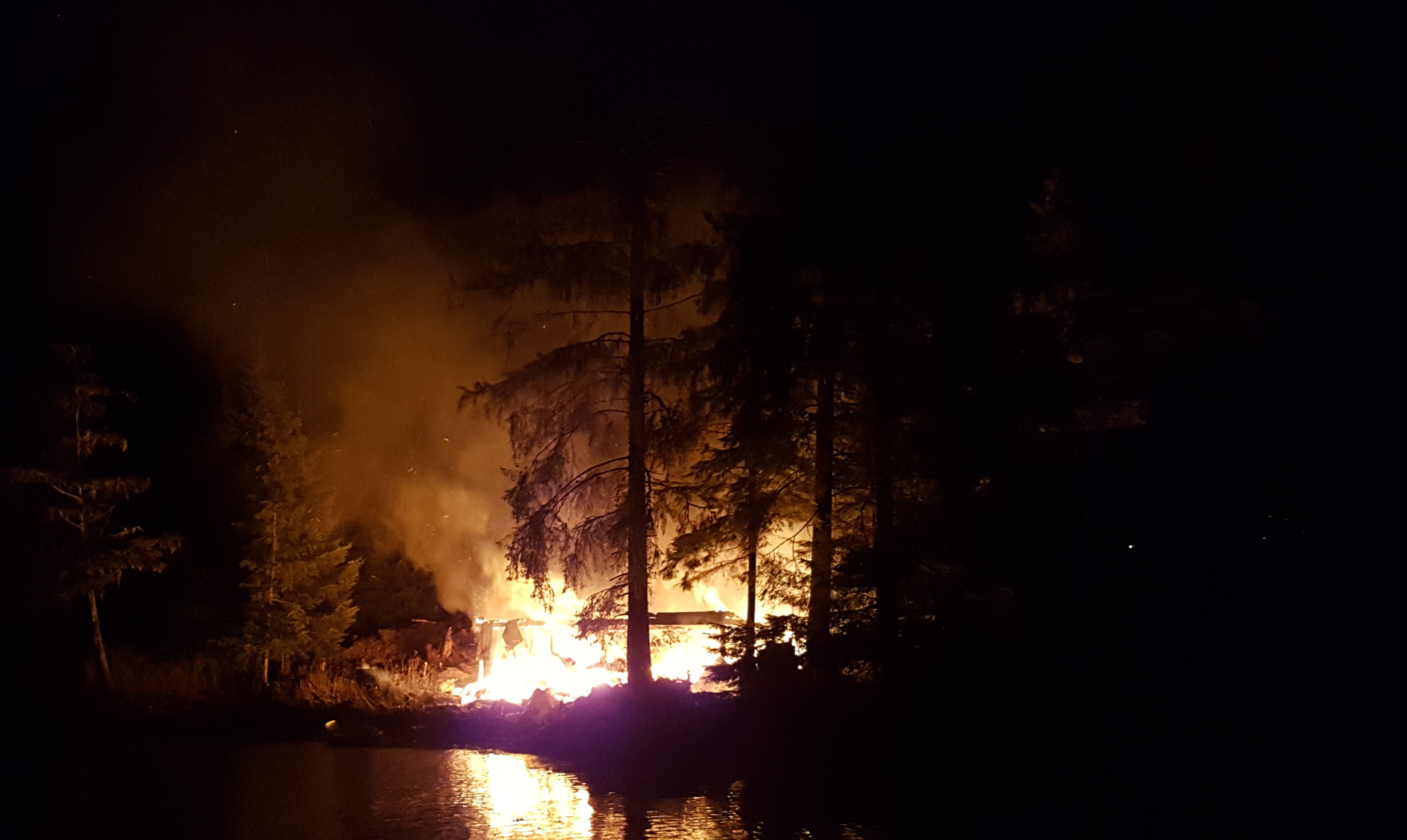 The power was out for a while, because Dean’s house’s electrical connection shorted out the system, as it burned. APT (the power company) actually got here before the fire department, and were working on fixing the situation. A fire truck came from the Craig Volunteer Fire Department, but they only had 800 gallons in their tank – they sprayed down at the trees and when the power came back on we resumed spraying with our garden hoses. I estimate we used about 2500 gallons from Arthur’s 3000 gallon cistern. Fortunately, we have a well, now, and the cistern is now re-filling.

As of dawn, we seemed to have suppressed the spread of the fire. It’s just there smoldering now. Here it is at 6 AM. 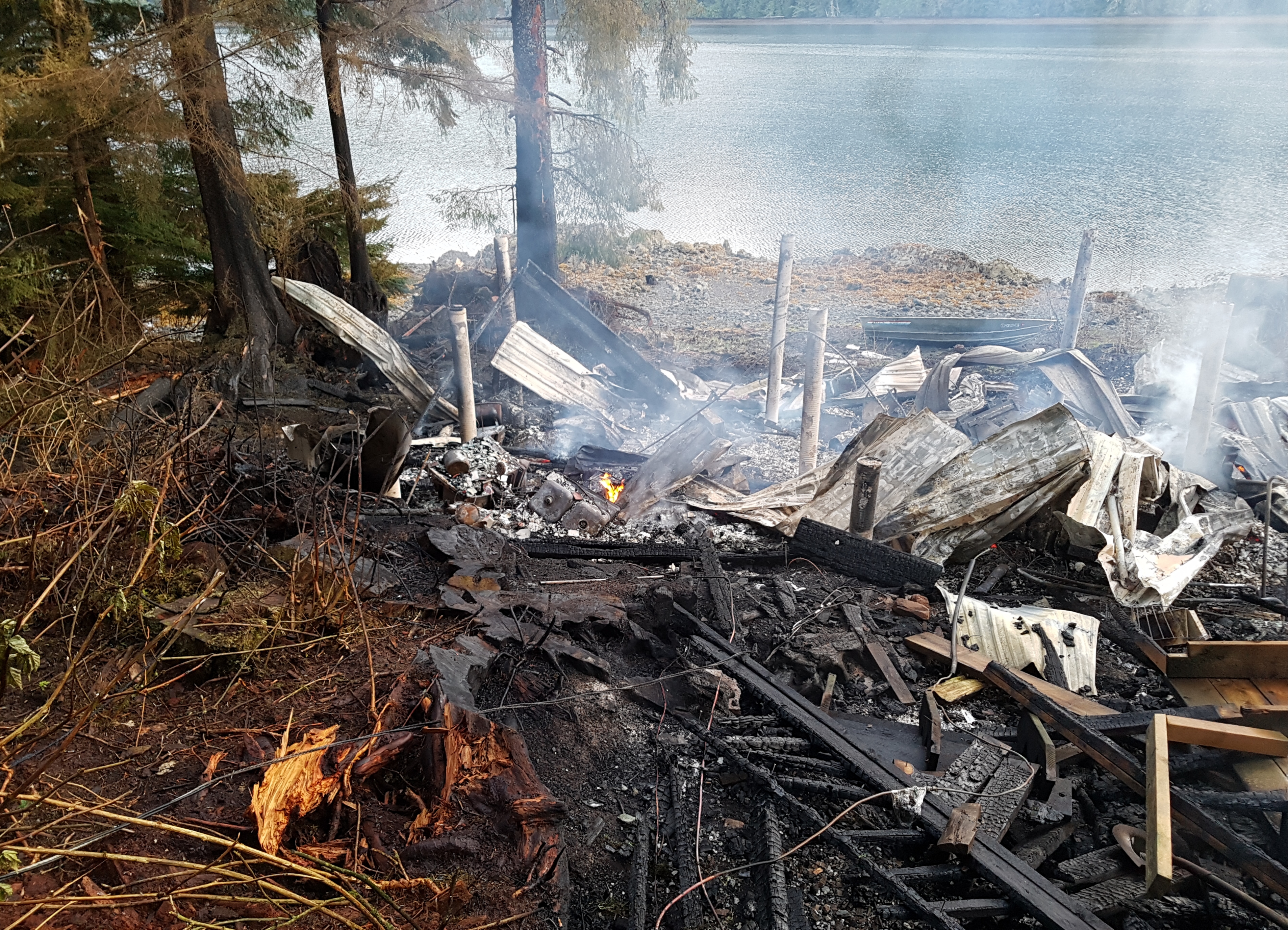 What a very intense night. My friends Mark and Amy, still here, were helpful throughout the night. I think they will now have a very amazing memory of their visit here.

We had some panic when it was spreading into the trees, because it seemed like nothing could stop it from catching our house, as the power was out. At around 2 AM, we evacuated our house, got out our computers and important documents, drove vehicles over to the western lot. That was pretty scary.

Today I took my friends Mark and Amy to Kasaan. I like the totems there – it’s my favorite cultural spot on all of Prince of Wales Island.

Here at the beach in front of the old lodge house, there is a bonsai-ish tree. 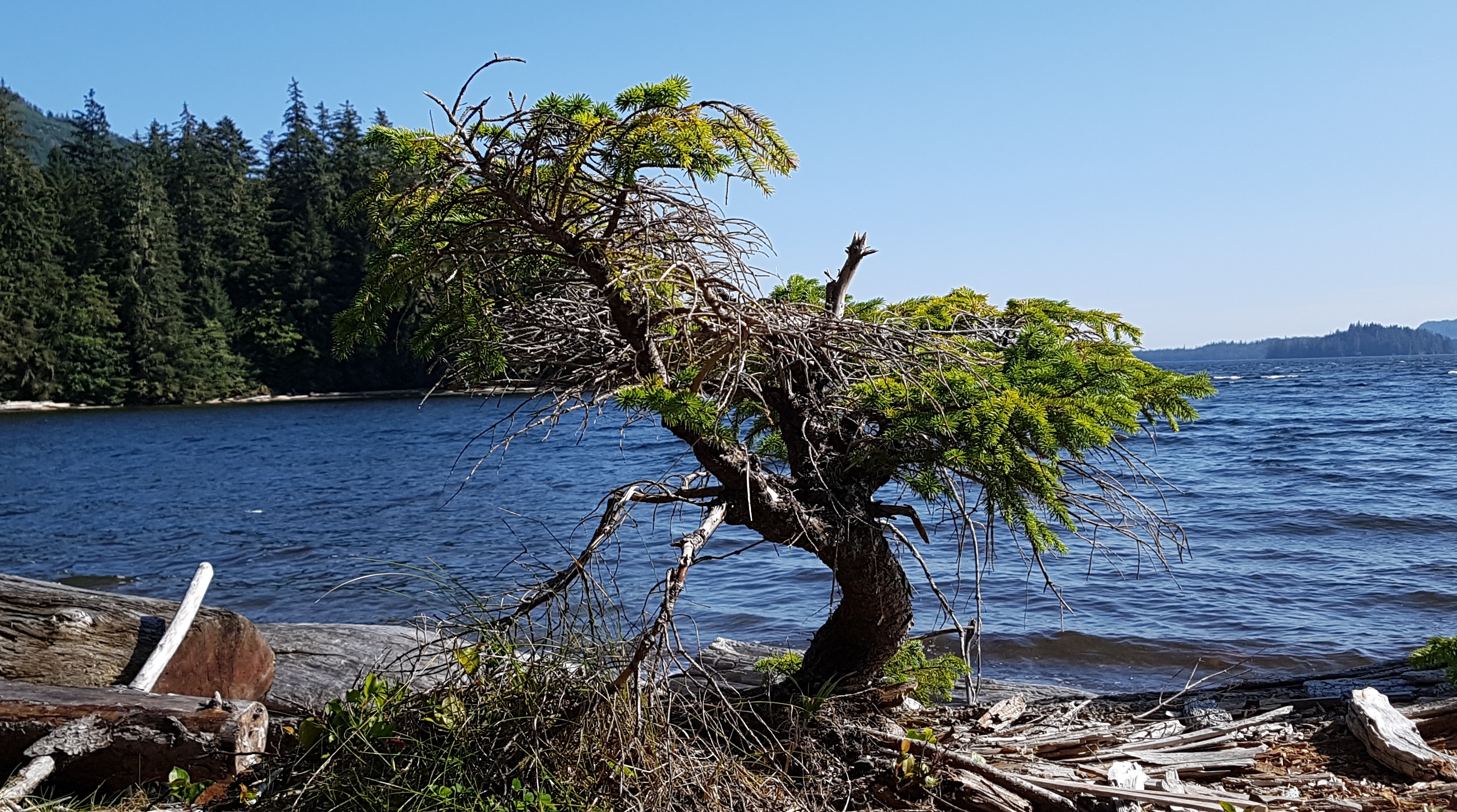 With my friends Mark and Amy here, I have been borrowing their help to clean out and move my “studio” (a portable storage tent thing) to the western lot. Here it is, emptied out. 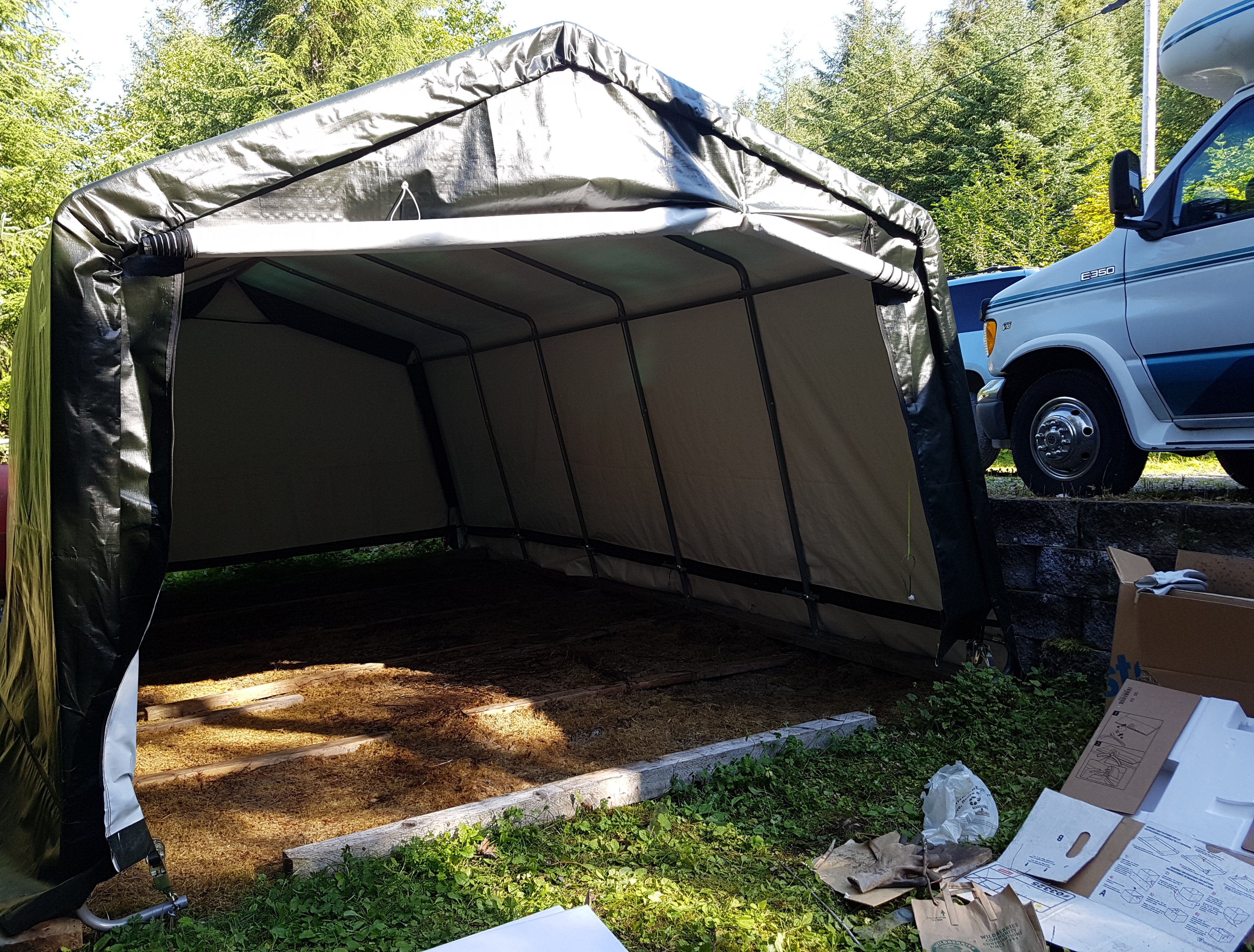 I was walking down the road, and saw a foot-high cedar tree growing in the gravel of the road. “Well, this tree will not last long, here,” I thought.

I yanked it out of the ground and carried it back to Lot 73. I chose a spot down near the water at the northwest corner, where Richard had thrown fresh raw fill (mud and rocks) down behind the new septic tank. I put the tree in the ground there. I wonder if it will grow?

Here is the young tree, lying there, roots exposed. 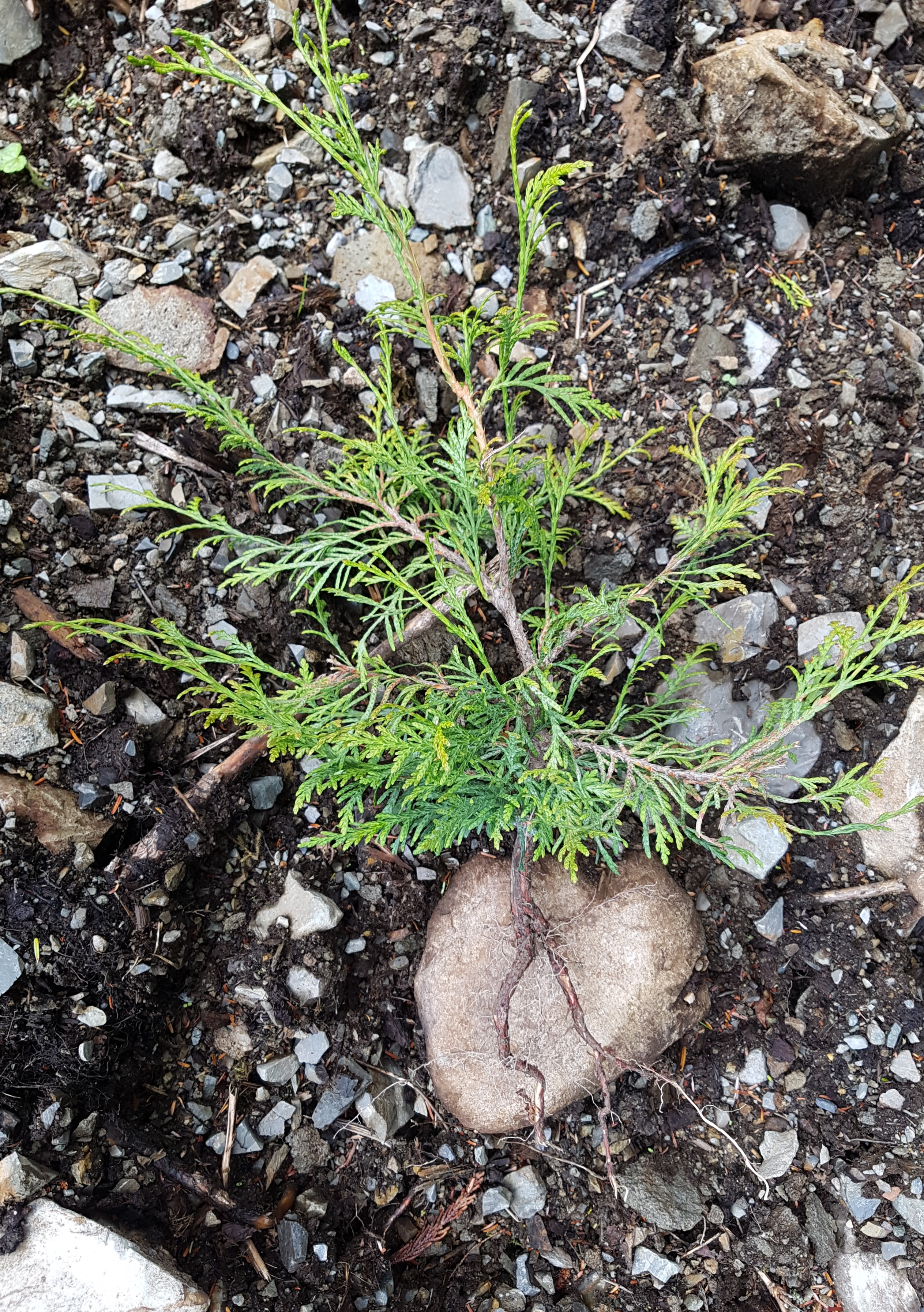 Here is the same tree, with its root buried. 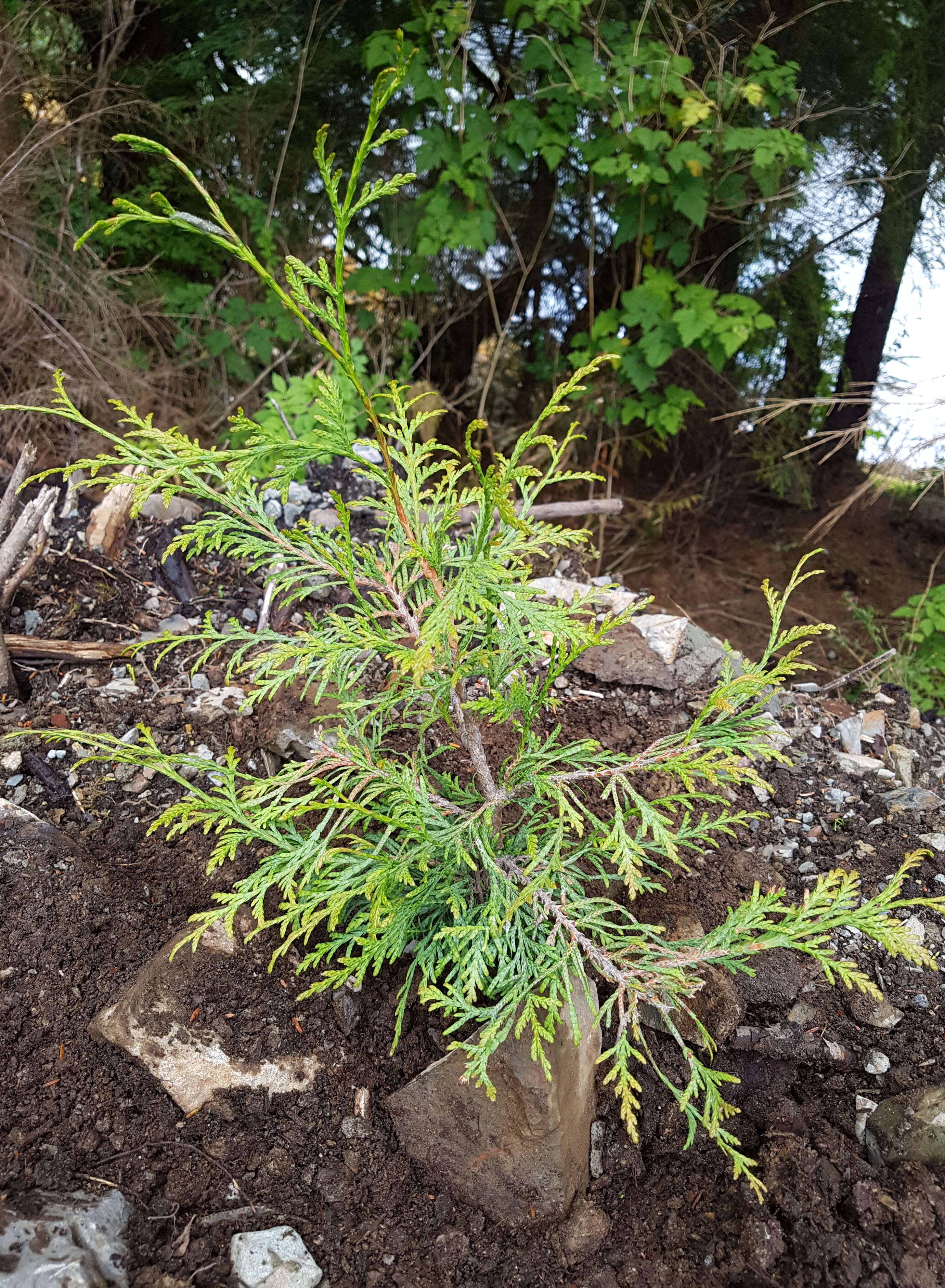 I’ve done a few other experiments with moving seedlings around, here. They don’t seem to have a very good survival rate, under my amateurish supervision.

My friends Mark and Amy from Minnesota arrived here. That’s pretty cool! We will do touristy stuff with them for their visit (about 6 days). Mark has actually met Arthur once before – in 1985! Mark remembers Arthur well – he made a big impression on him at the time, but Arthur doesn’t remember Mark.

This tree is beside the road. 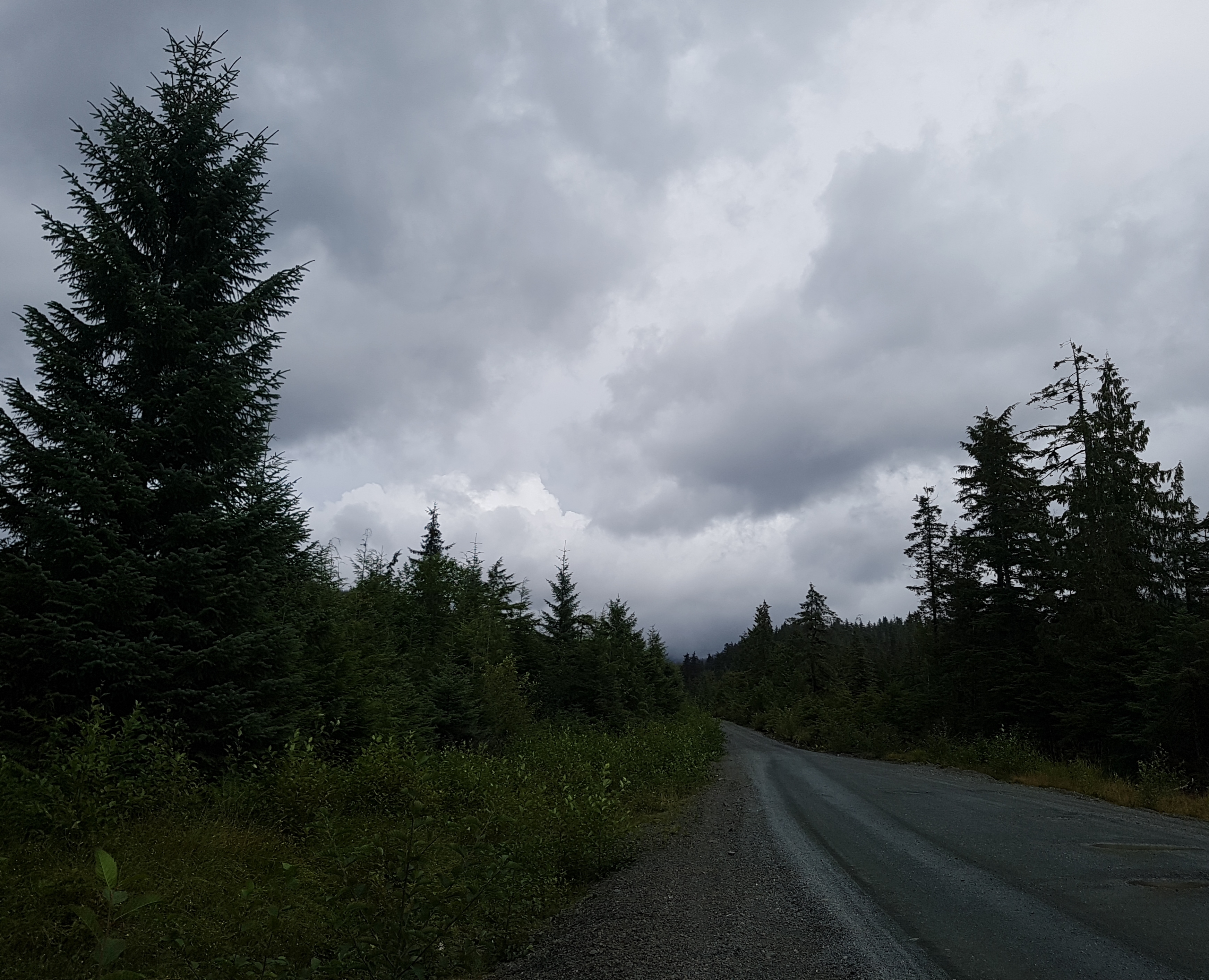 – an englyn in the style developed by Robertson Davies

Arthur and I sought some fish, but this first post-storm sojourn was fishless.

I saw this tree – specifically, the one right in the center of the photo. 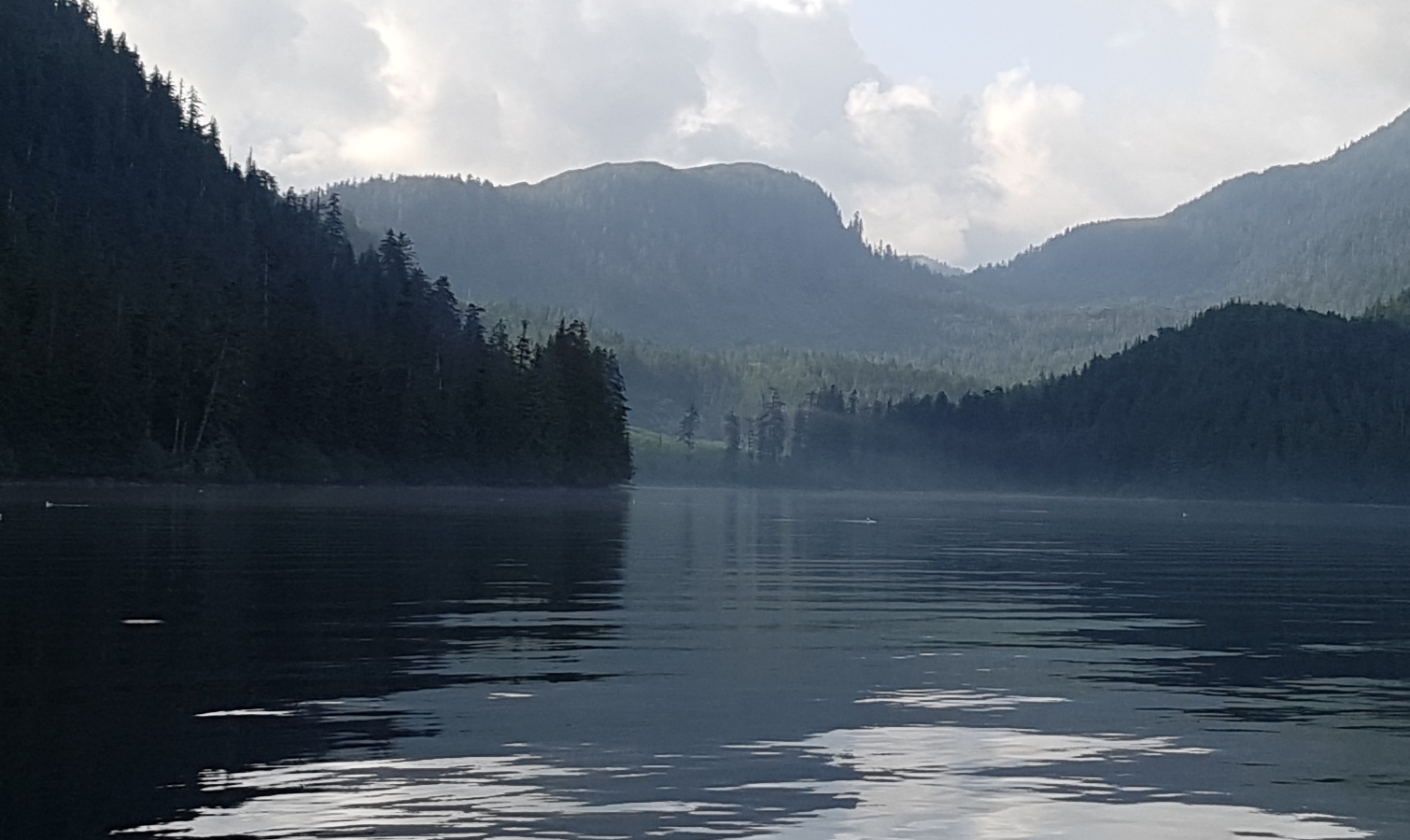 I believe I have featured this specific tree before – it’s along the road near the 8 mile bridge, and has that distinctive fork in its silhouette. But I thought the light was interesting, so the tree will be featured again. 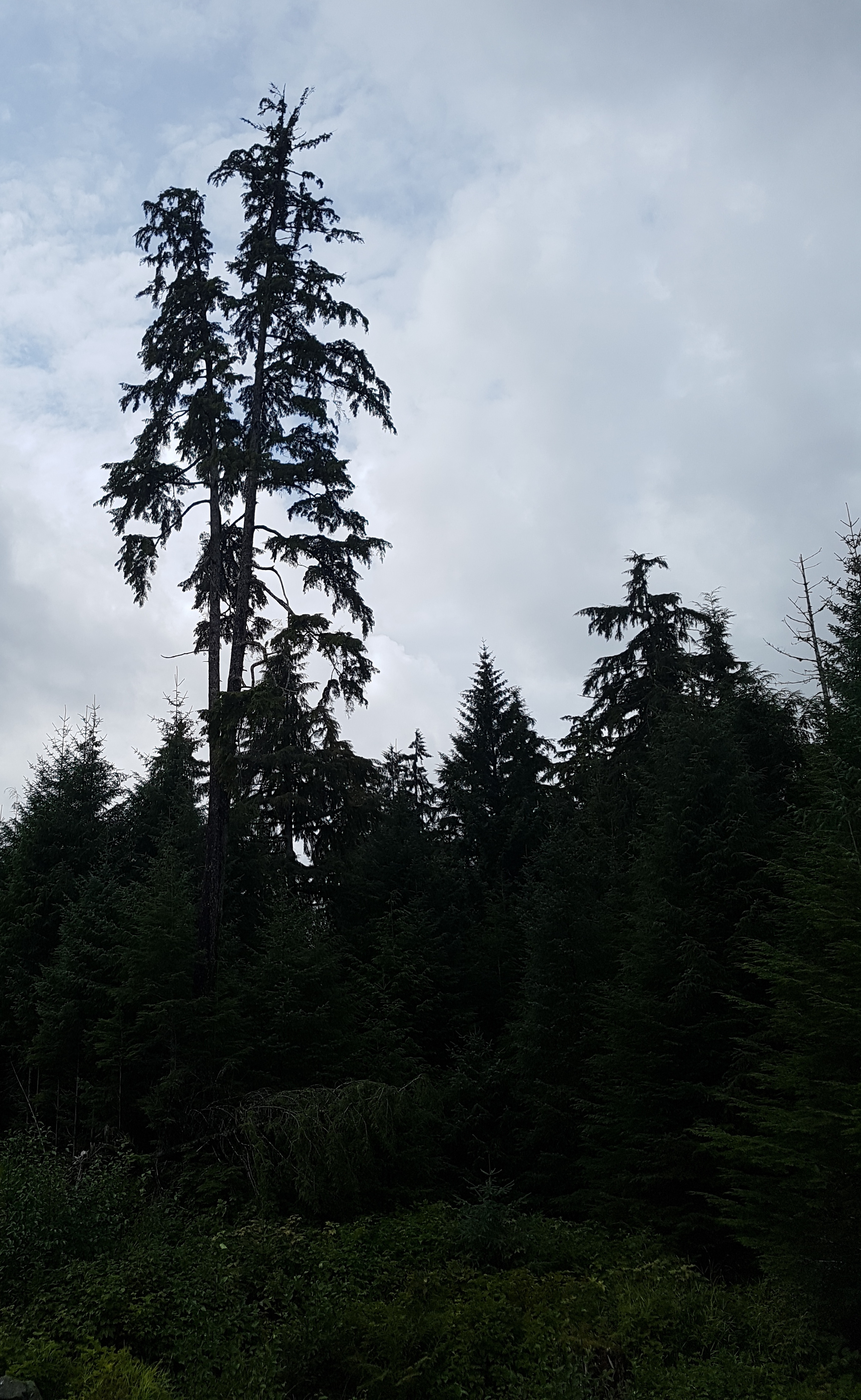 A tree that is now retired from treeness, and moving into a life of loghood. 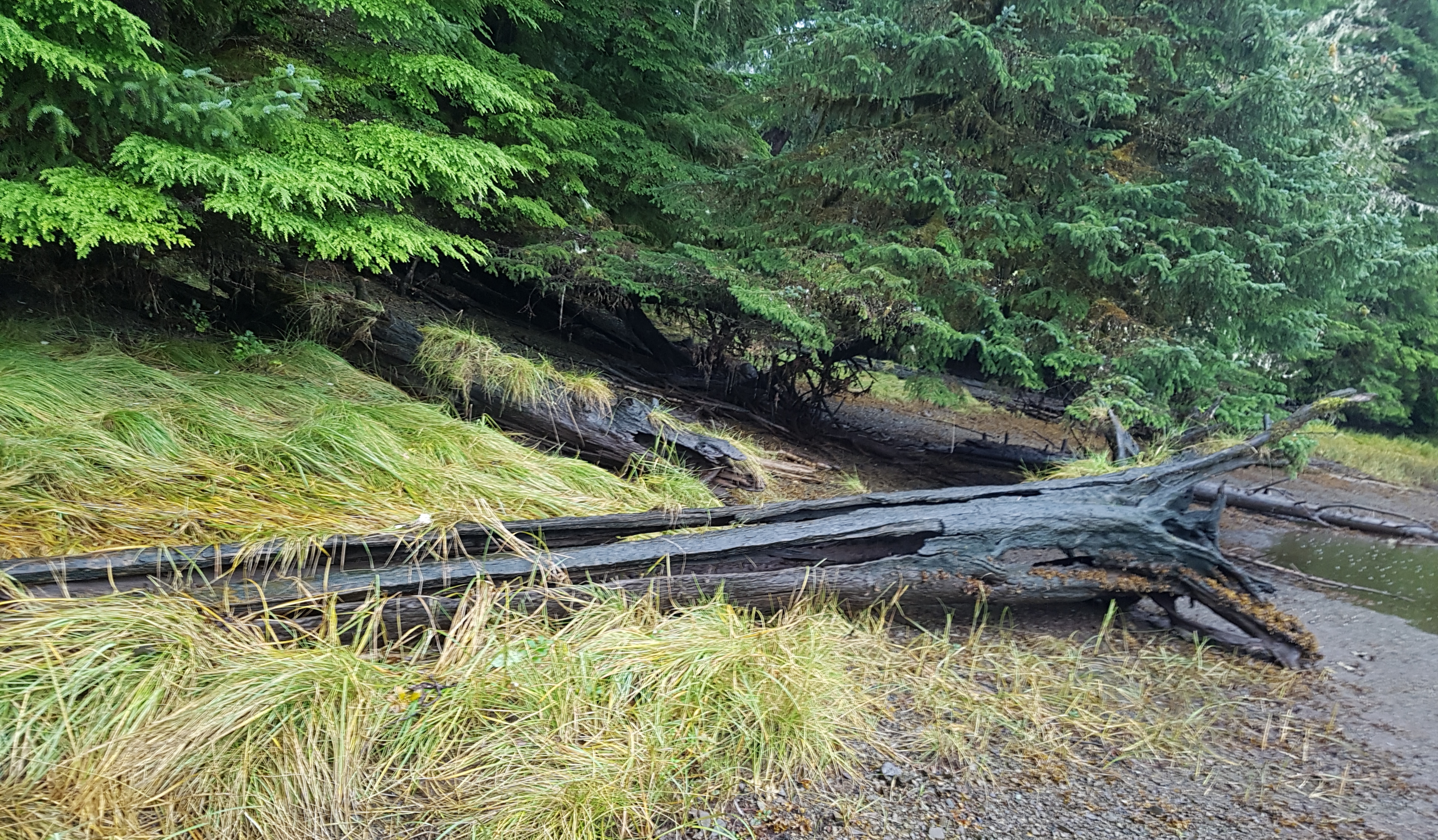 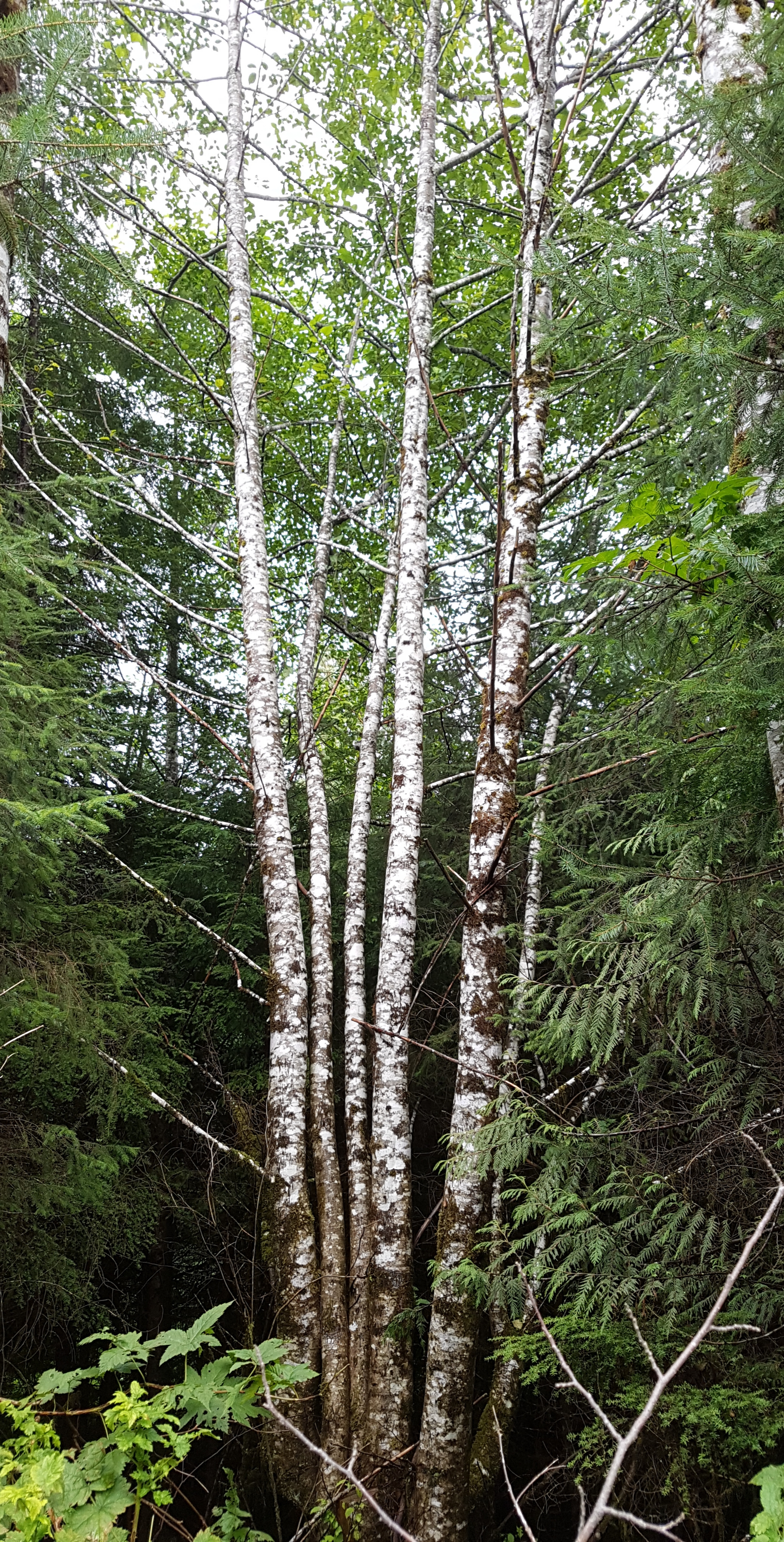 Oh deer, another tree – at the southwest corner of Lot 73.

Here is the view standing on a stump nearby, looking the other direction. I was trying to sight the utility pole. 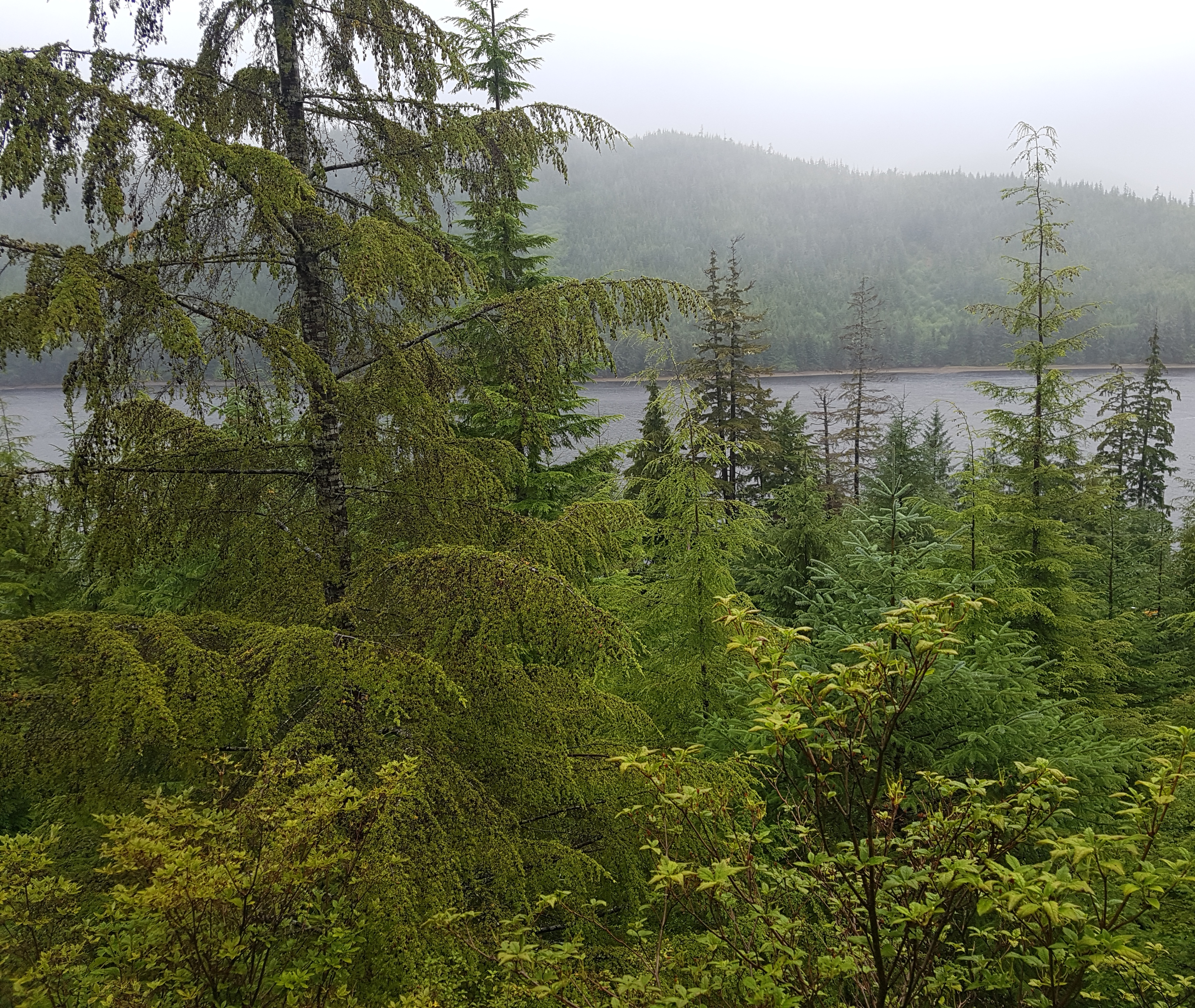 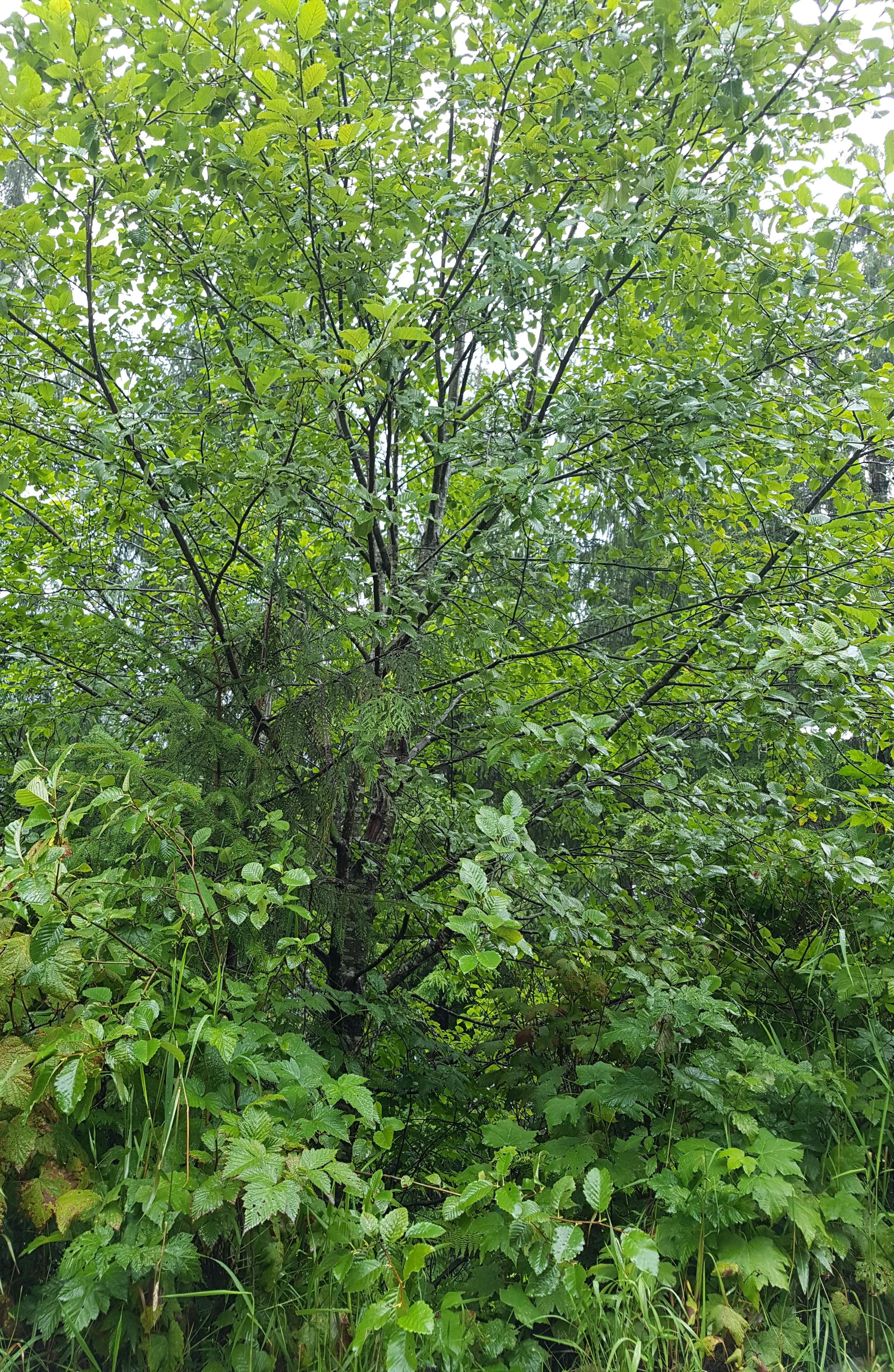