A tree down by the water. 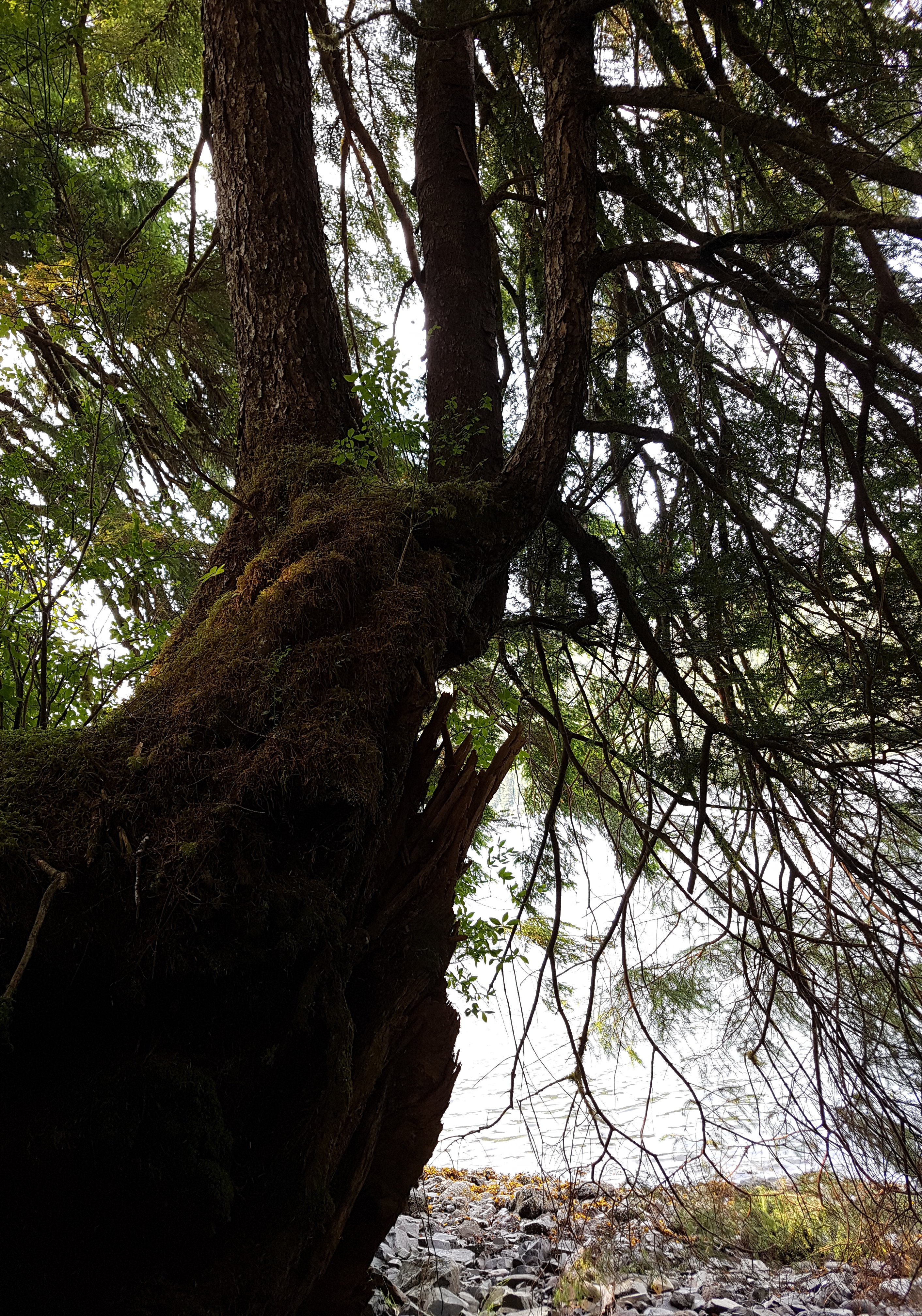 First, I must show the obligatory tree. 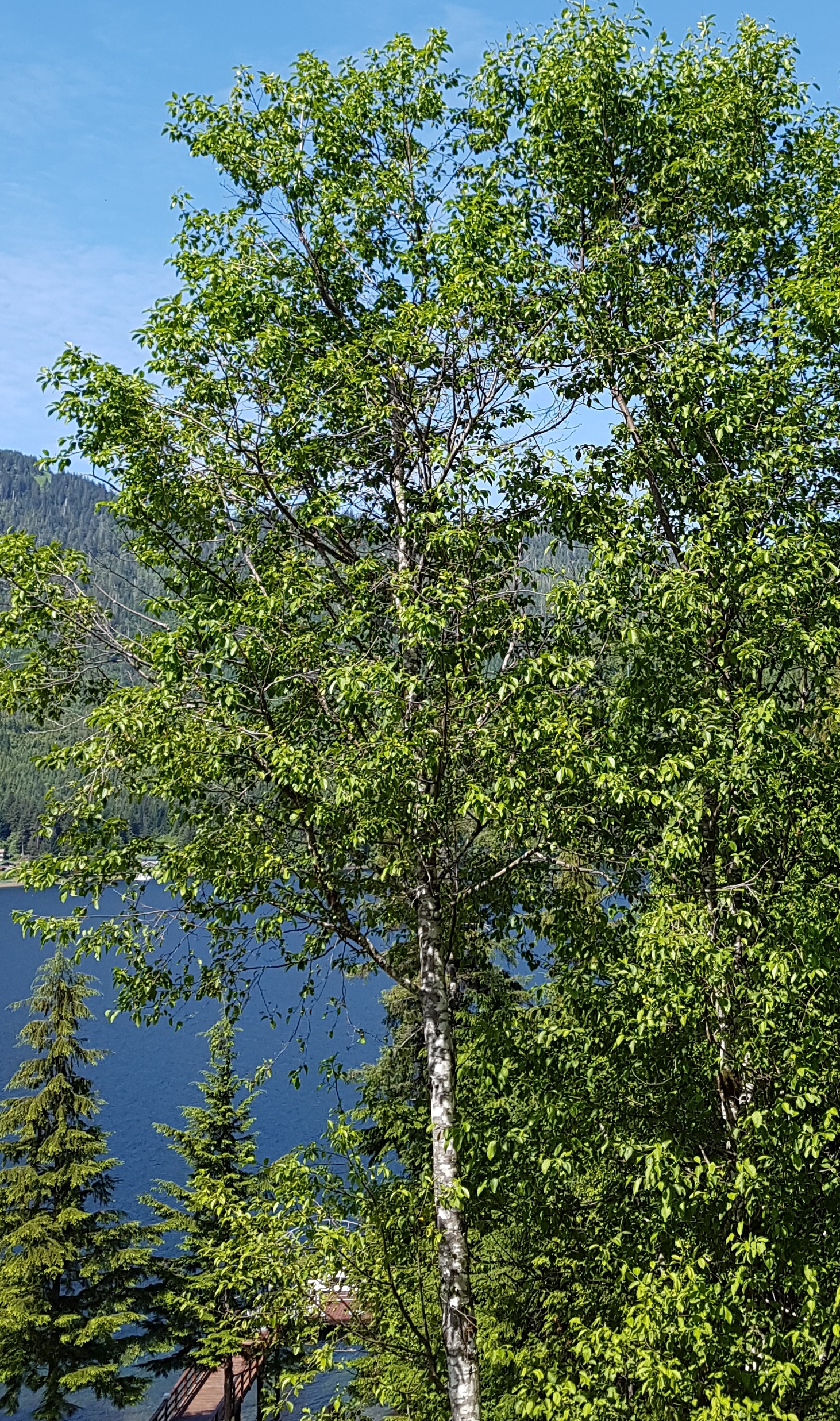 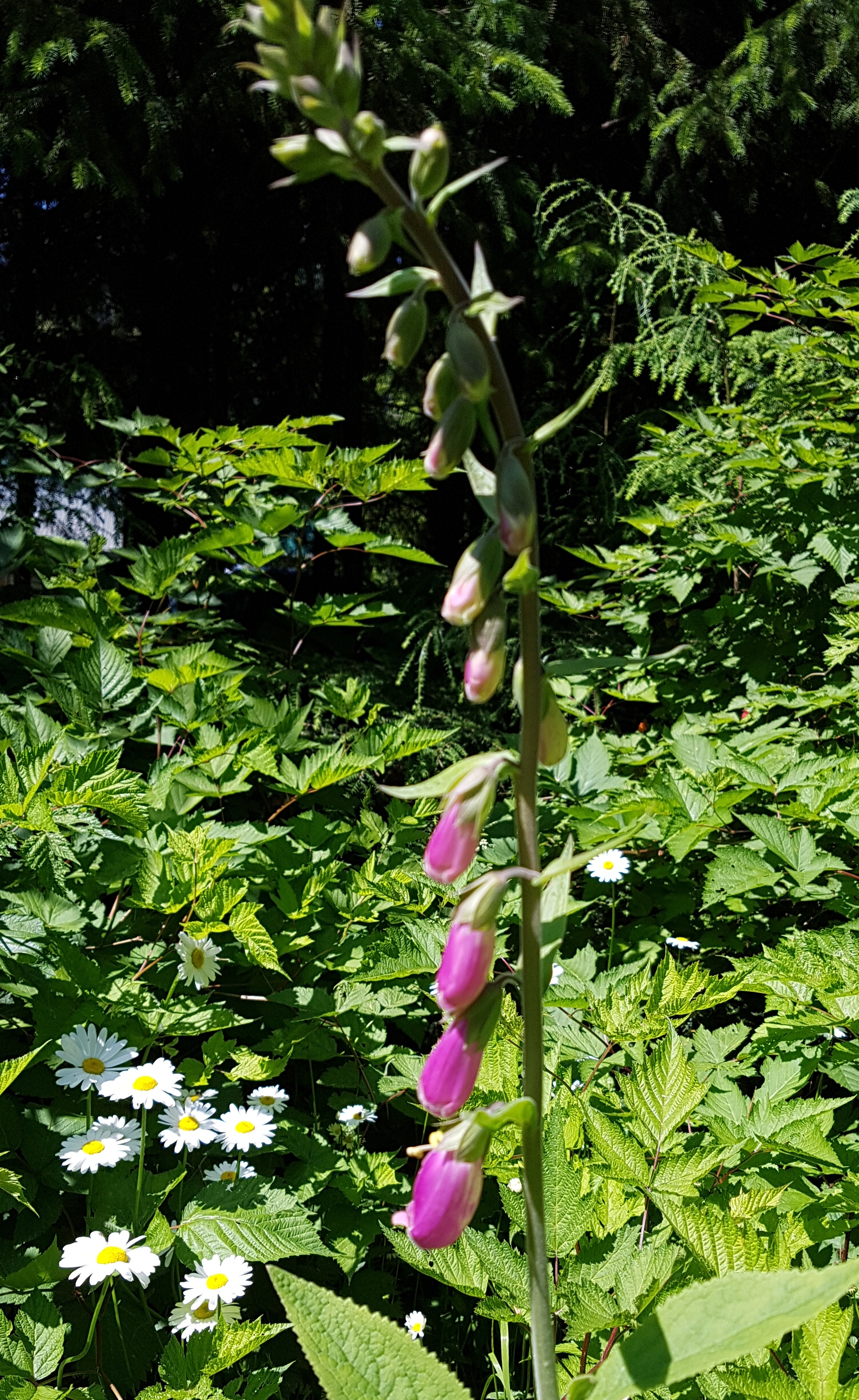 Lastly, because this is a dumptruck-themed blog (sometimes), here is a dumptruck (specifically, Richard’s, at side of road, mile 9.8). 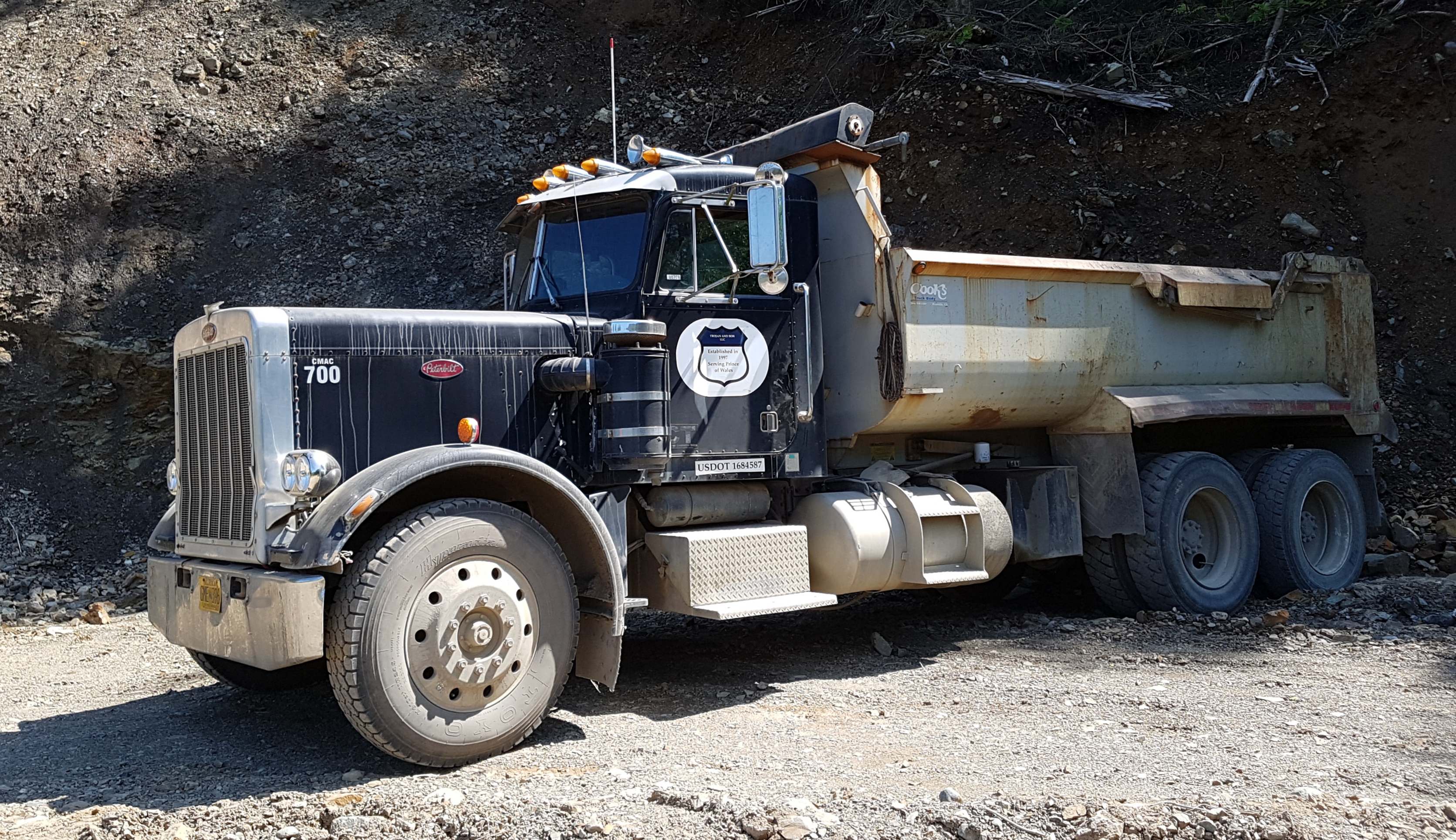 I saw this tree, before Arthur and I went out in the boat seeking fish.

Thursday is shopping day. And we stopped by the library, as usual. Here is a picture from the front of the Craig public library, with tree. 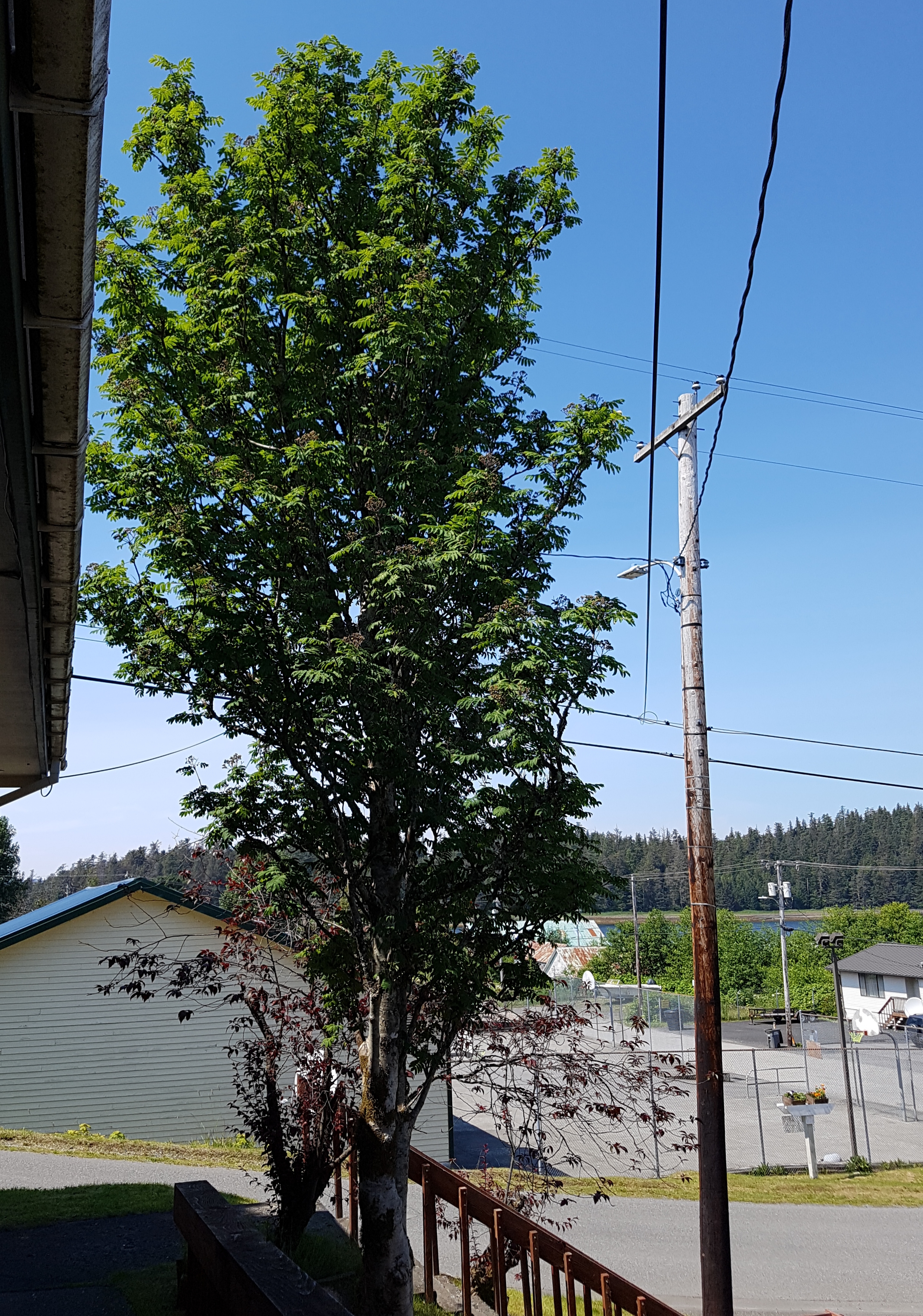 I was busy today, with working on the well-head shed.

Here is a tree from the archives: February, 2010, at 관악산 [Gwanak Mountain], on the southern city boundary of Seoul, where it borders the suburb Gwacheon. 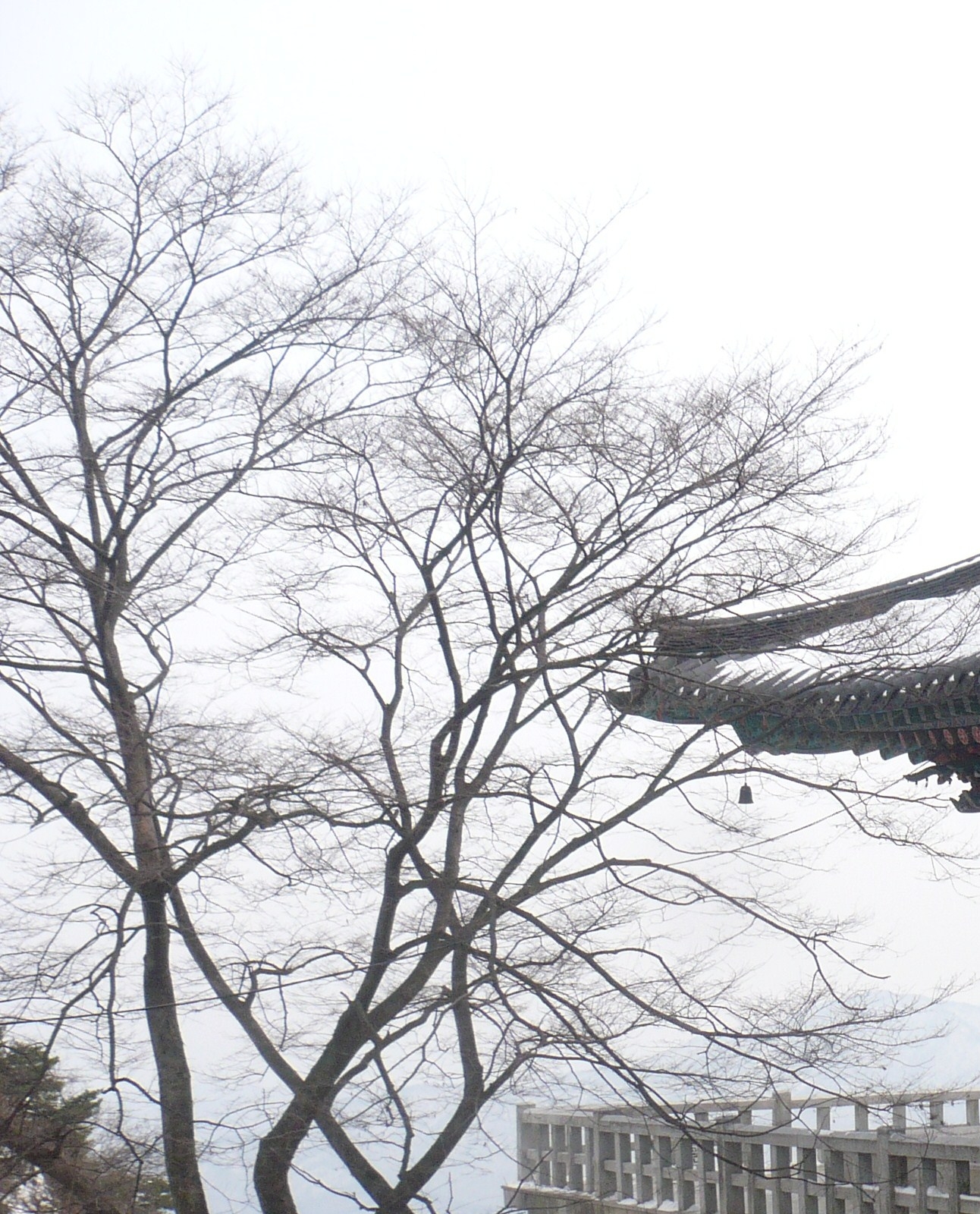 This video is here because of the name of this blog. And because I think I had a toy dumptruck like the one shown in the video.

A tree from a few days ago, out along the road westward. 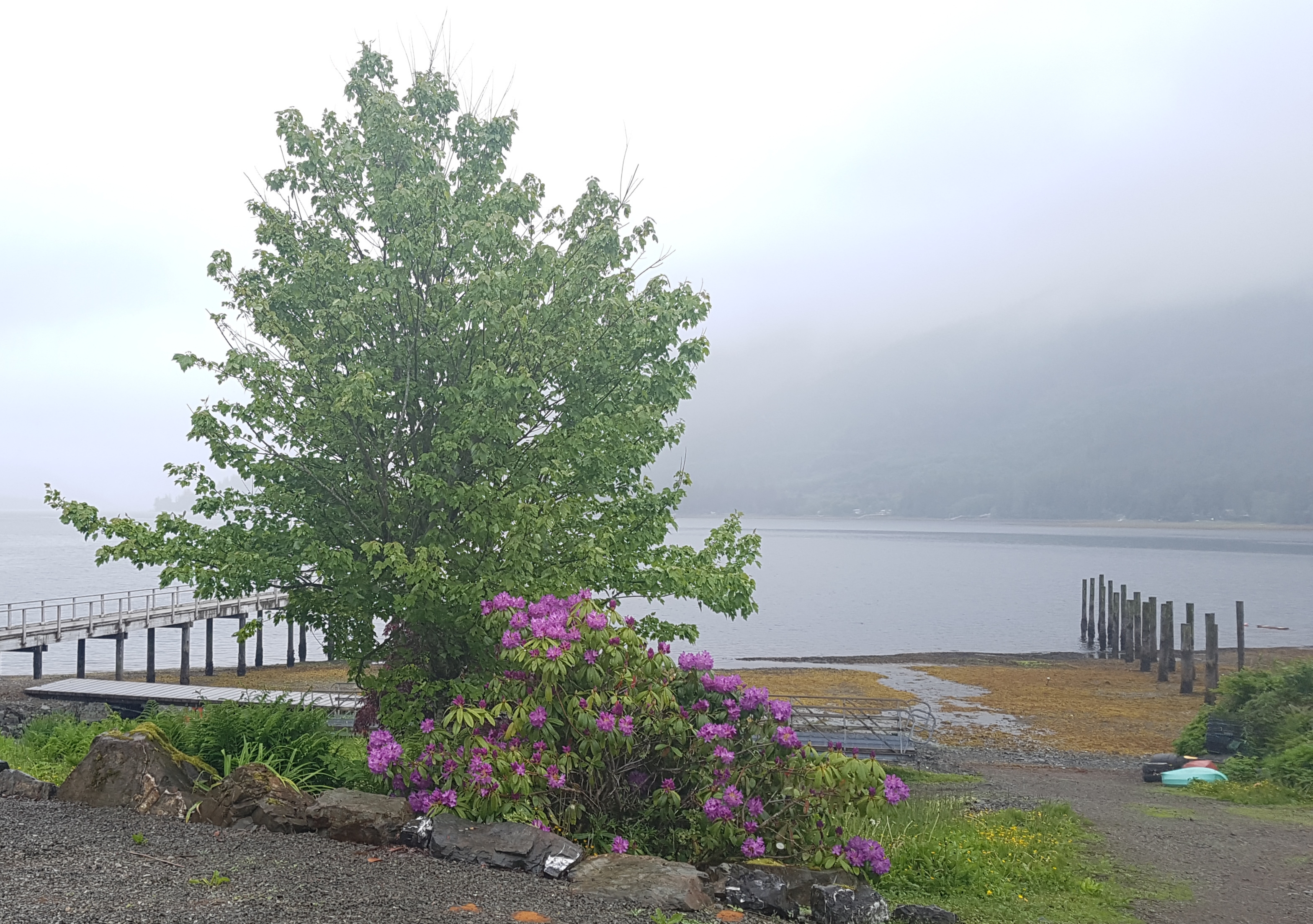 I finished the “first draft” version of the well-head shed (doghouse). I call it a first draft, because I need to buy some supplies (electrical and plumbing) to now reconfigure the inside, now that I know how the pump works and what’s needed, so that the whole system is “hook up ready.”

I also need to get some proper fasteners for the scraps of metal siding I’ve used (which I found in a pile down by one of Arthur’s sheds). 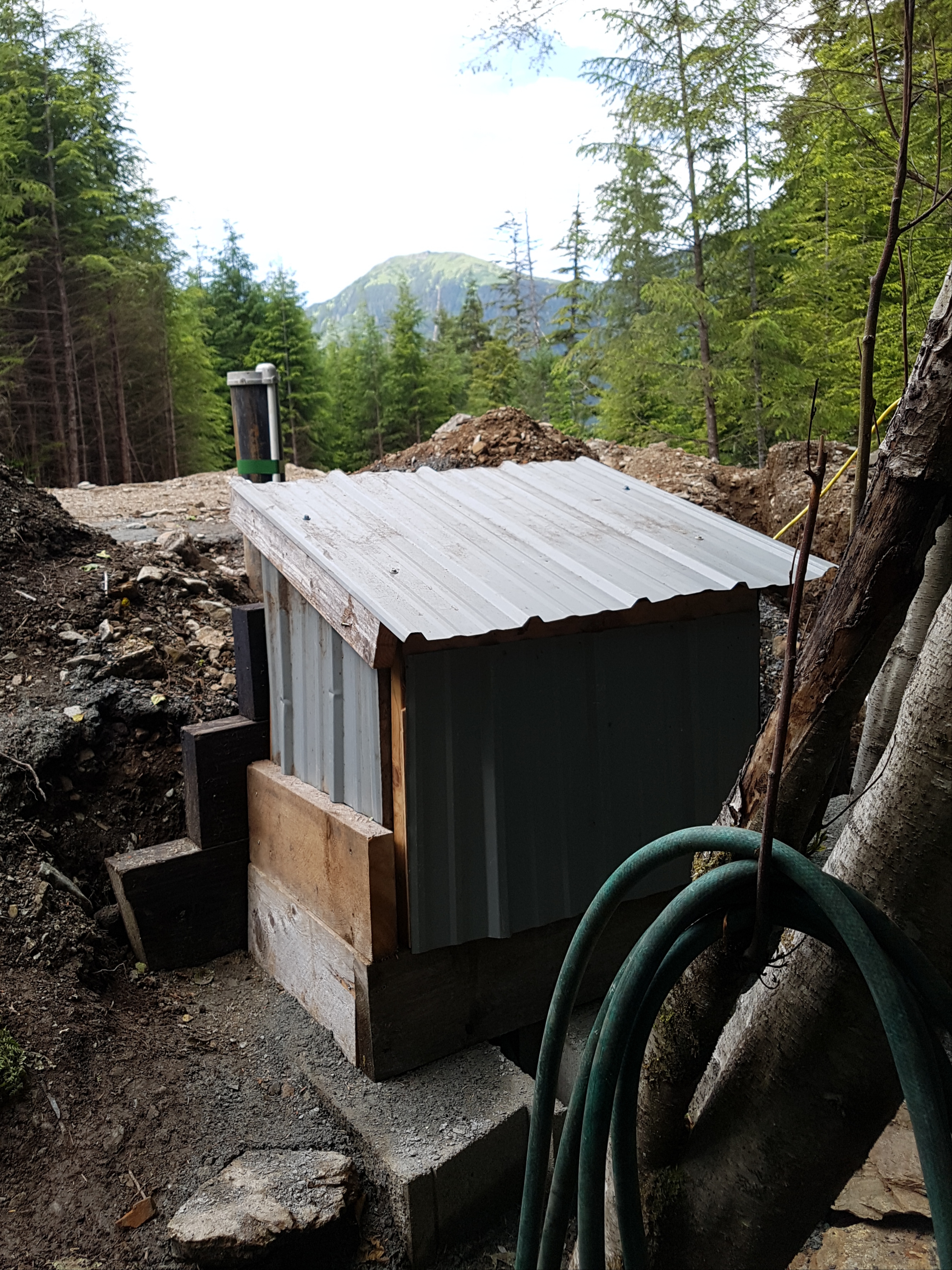 Only 5 minutes after taking this picture, as I carried some of the tools I’d been using down to the house, I got stung by a bee (or yellowjacket?). I don’t think I’ve been stung by a bee in at least a decade. I’m sure I was never stung during my sojourn in Korea.

So now I’m just resting. I’ve never had a severe reaction to beestings, but it does swell up. This sting was on my collarbone – I think the bee got caught in my shirt somehow without my noticing.

The tree seems incidental to the mountain across the inlet: jumping in from the left side of the frame and photobombing the scene. 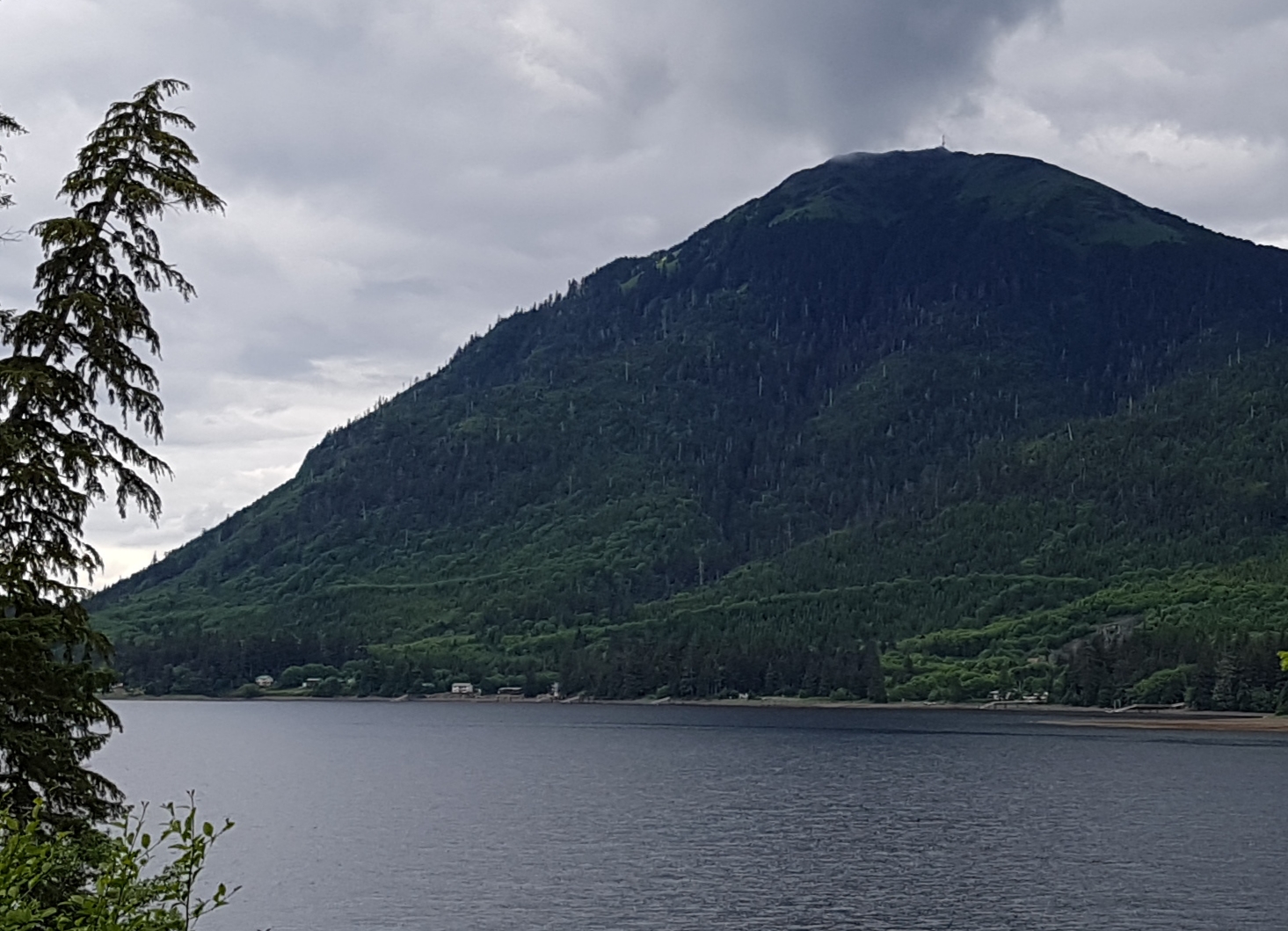 Arthur and I have been calling the “shed” which will enclose the above-ground pieces of the new well pump the “doghouse.”

I have been working on building it, using just pieces found lying around. 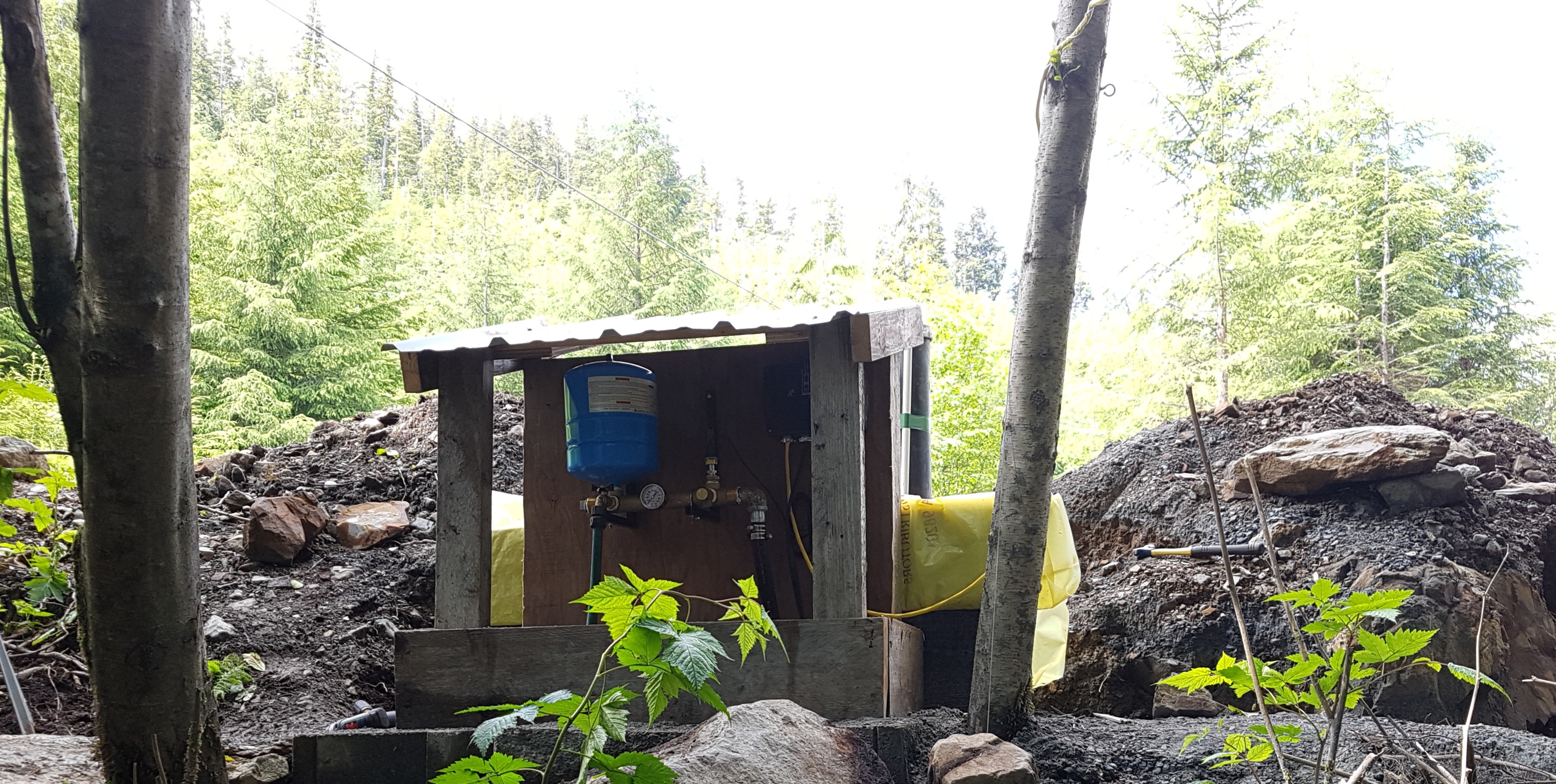 A tree and its doppelgänger.

Art wanted to go fishing. We launched on a drizzly morning under gray skies and smooth waters.

We drove out to the open ocean. I have never been in the open ocean with Arthur in this small boat. The swells weren’t so big, I suppose, but they seemed big to me. They rolled beneath the boat and towered over it, reaching for the white surf on the rocky shores of Noyes Island. And still, no fish were caught.

Arthur gets impatient, which strikes me as a difficult trait for a fisherman. Despite my discomfort (psychological, not physical) on the surging sea, I was willing to wait, but we’d only had a hook in for halibut for about 20 minutes before he gave up and said we should head back. We stopped at Siketi Sound and trolled for salmon for a while, but no bites there, either. I simply say nothing, during these efforts. I don’t really have fishing skill. Anyway, Arthur would not find advice from me to be compelling. I stay silent, and do as he asks.

Call it “Zen on the gray-blue sea.”

At least he didn’t seem to allow his vertigo to interfere with his efforts. He constantly complains that it is unchanged, yet his functionality isn’t so bad – it must be somewhat improved in comparison with last weekend.

Here is the flat water at launch. 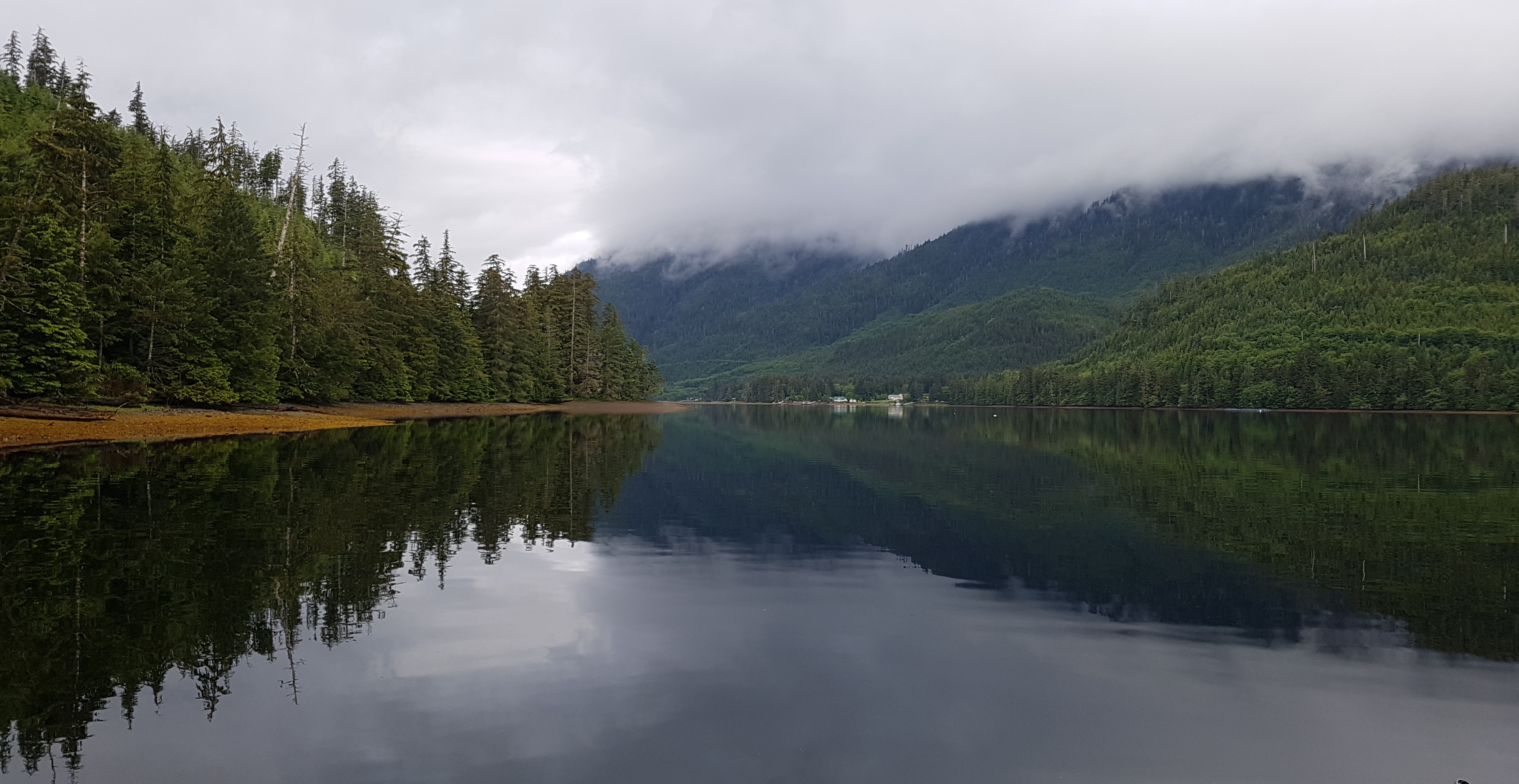 Here is a picture of our course, plotted on the boat’s GPS tracker. 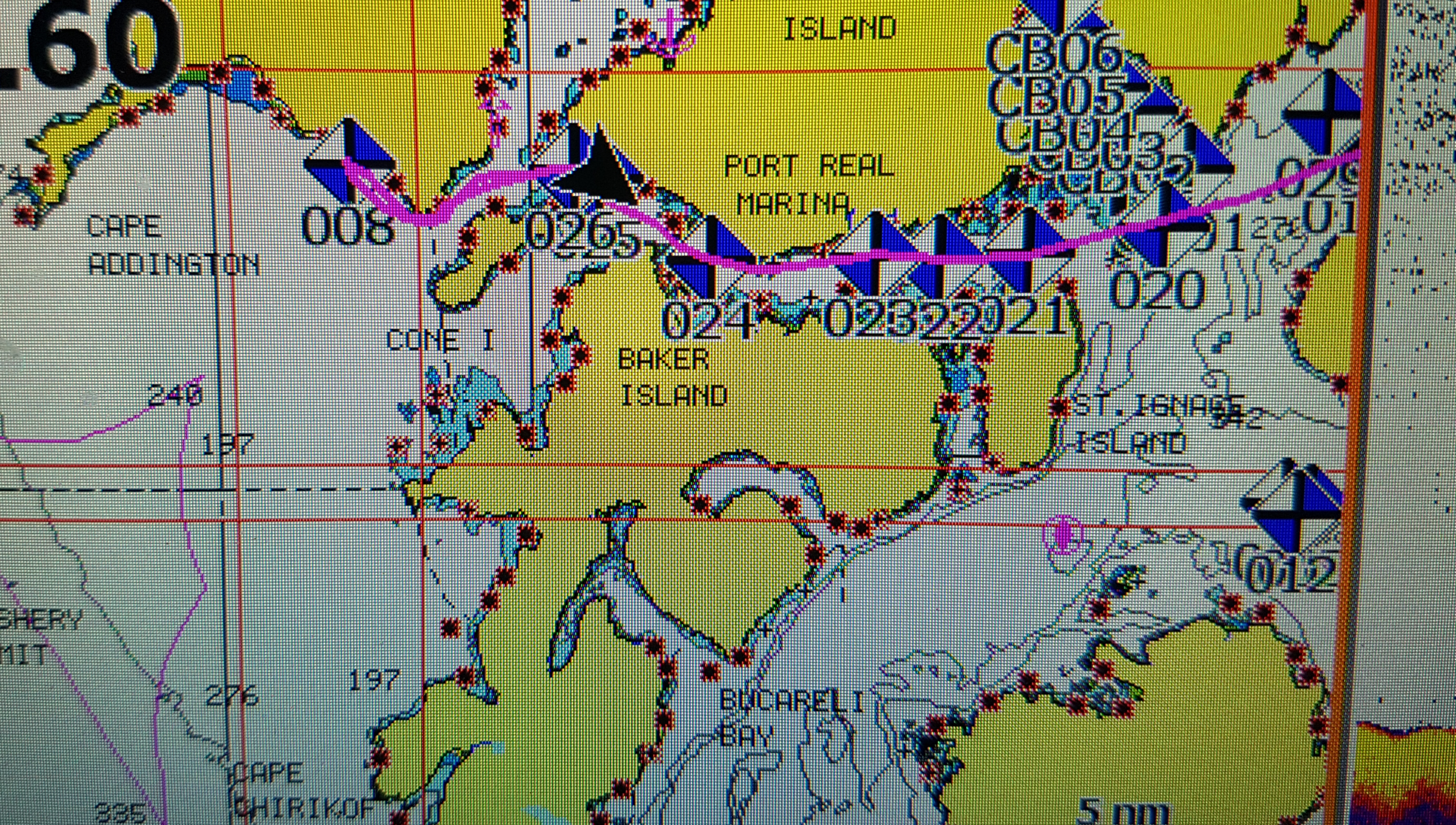 A tree was seen by me in October, 2013, on Ganghwa Island, Gyeonggi Province, South Korea. 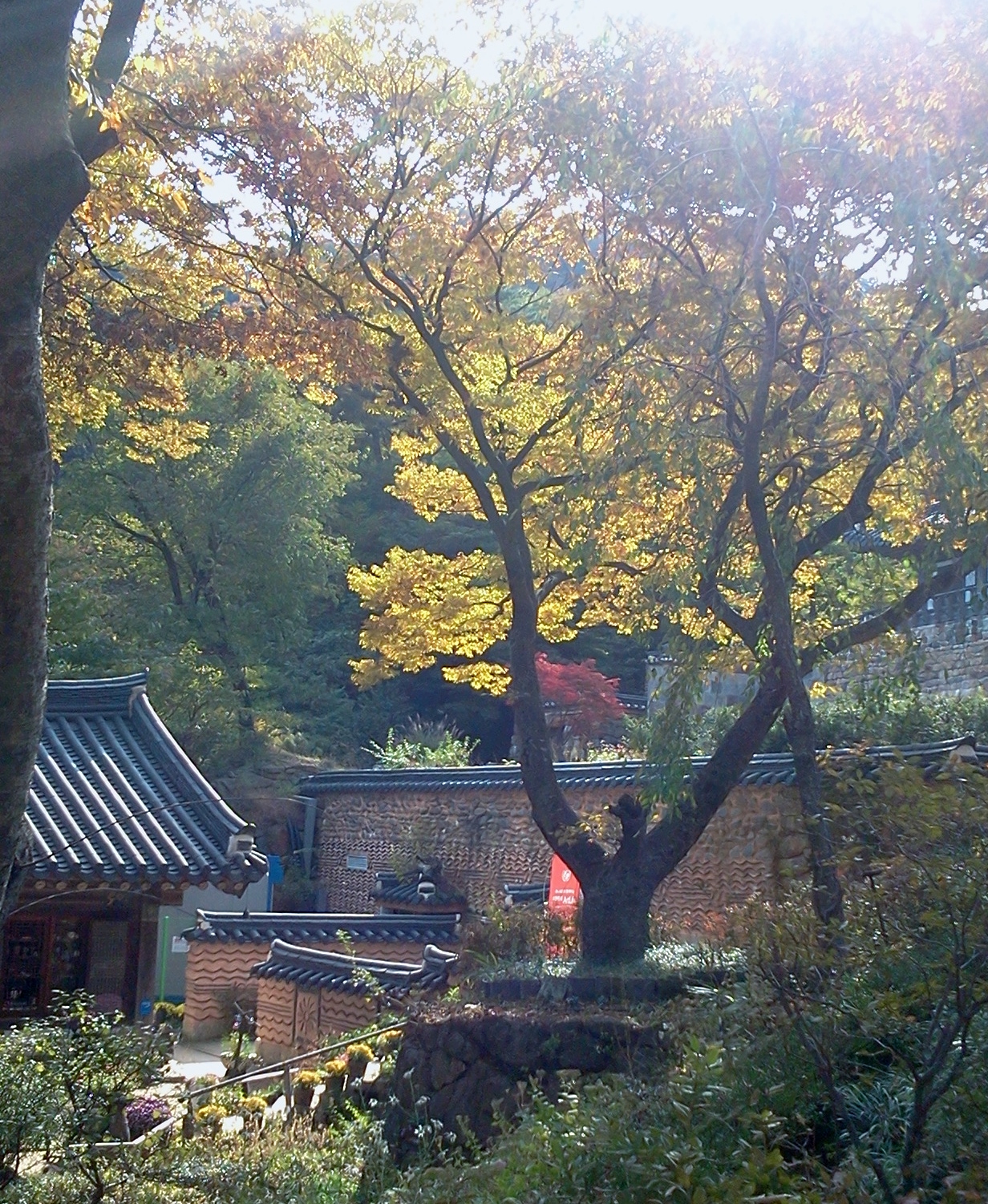 The neighbor-down-the-road, Joe, helped us pick up the boat from the service shop today. We towed it to the launch area and put it in the water, then Art and Joe drove the boat back to the house while I drove the truck with the empty boat trailer.

Here is the boat, back at its home dock.

The well-drilling guys finally came back, today, and installed the in-well pump and controller for the new well.

So all the digging I did last month finally had a purpose. Now I have to build a little shed (which Arthur and I are calling the “dog house” because of the approximate scale) to enclose the new out-of-well pieces. 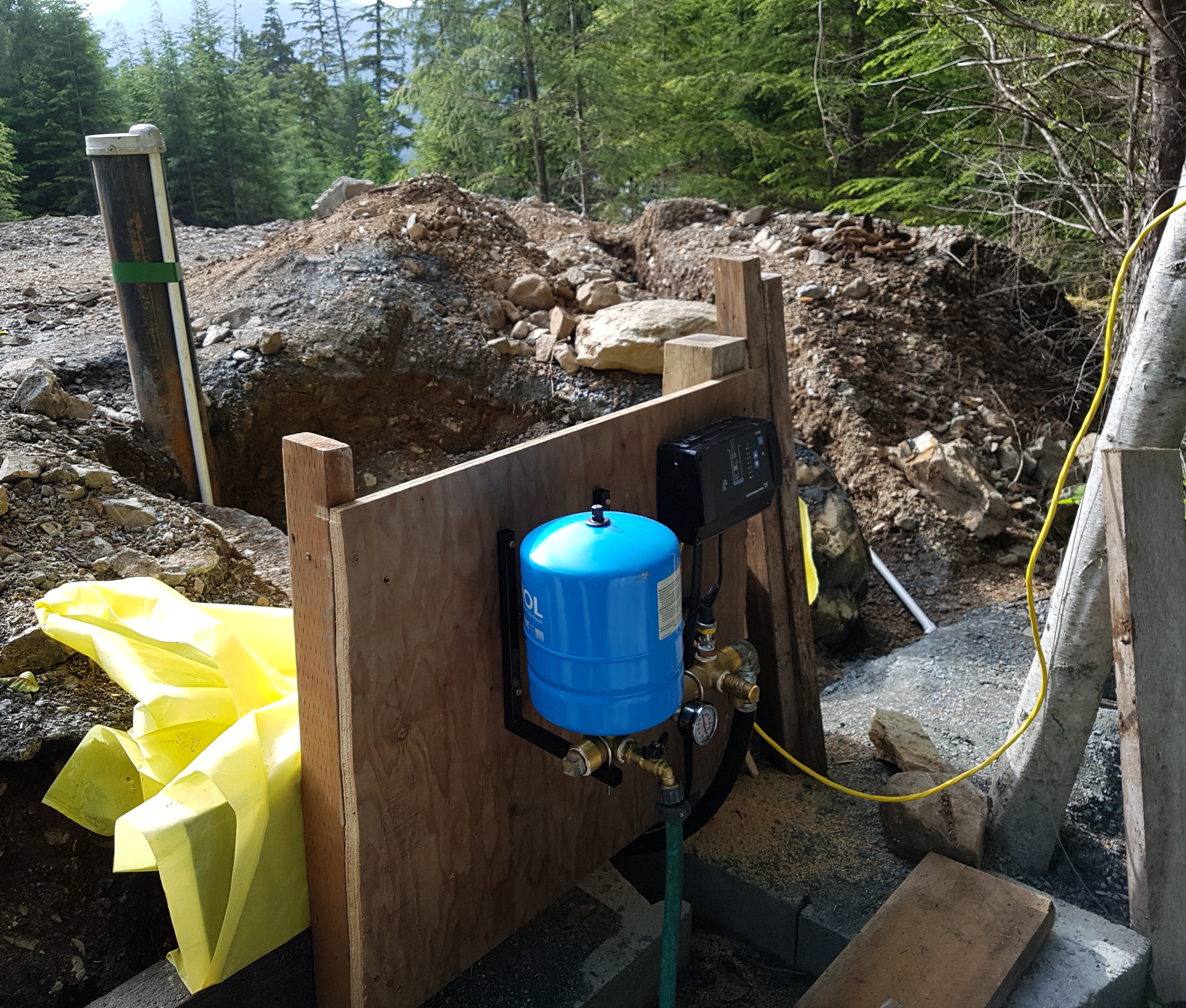