A tree worth numbering. 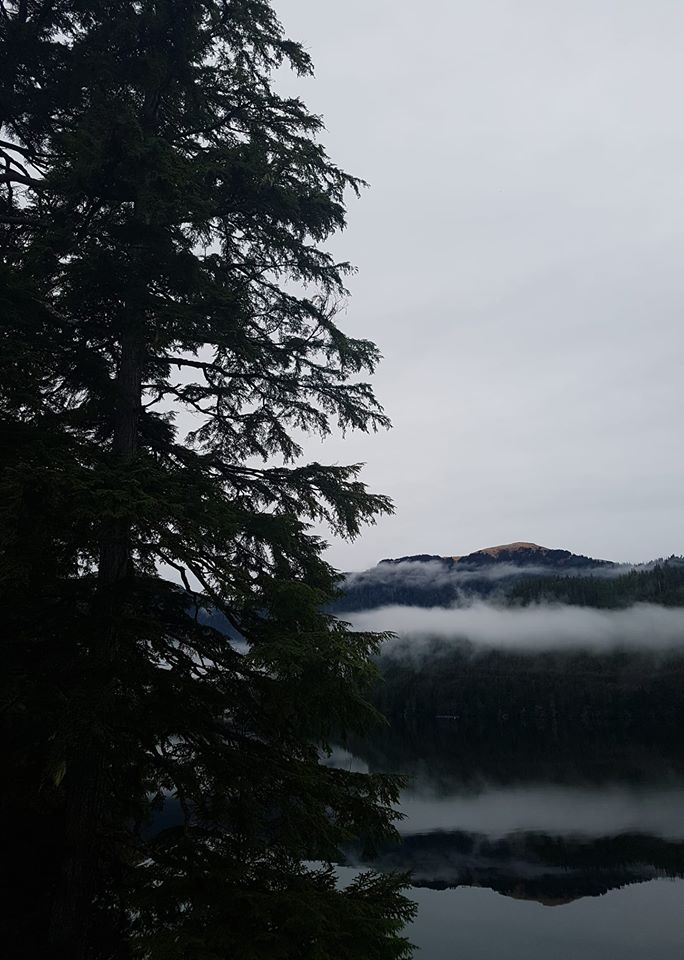 break down large problems:
go get a box, go through it…
one step at a time

A tree worth numbering. 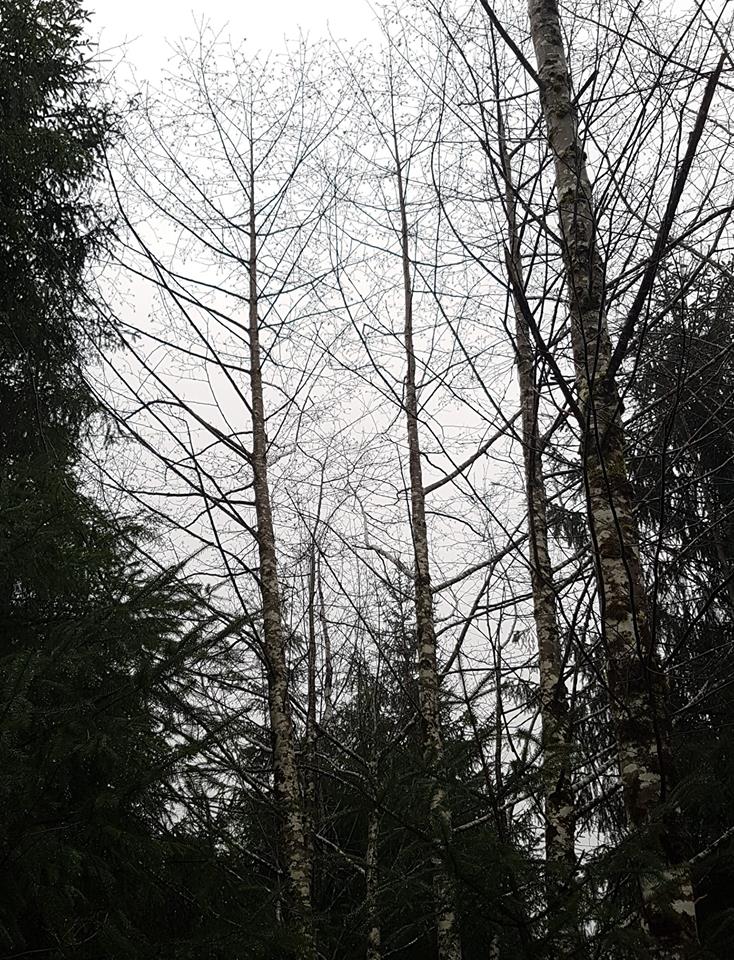 I sleep on the floor
and there’s a line around me
showing the demons.

Tree twenty-seven, with eagle above. 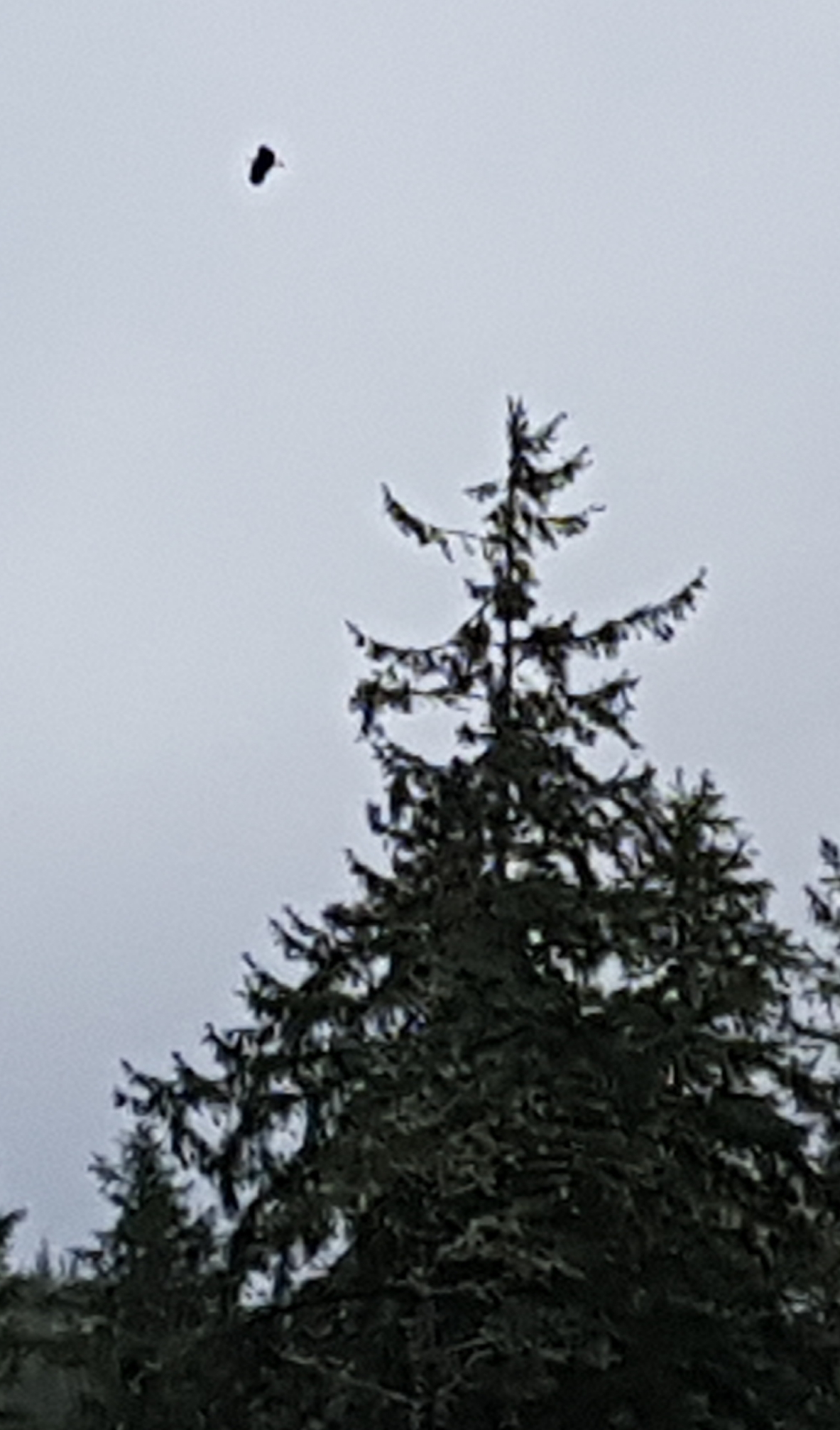 Living here along a dirt road in Alaska, when your washing machine breaks, you don’t just call an appliance repair person.

Arthur is used to being mechanically adept, and solving these problems for himself. He takes things apart and figures out the problem and deals with it. He has always had very high skills in this area, and I would say to the extent I have skills such as this at all, I largely “inherited” them from him.

Well, the door latch on the washing machine malfunctioned this morning.

Arthur seemed flumoxed and overwhelmed by it, however. This is his new cognitive state, to some degree.

Thus I had to “play Arthur.” I’m pretty happy with the result.

I had to look up how to disassemble the door latch online. There are lots of resources for that kind of thing, these days. I took out the door latch, and called the washing machine’s manufacture about replacement parts. The washing machine is 20 years old. That model is obsolete. It was looking problematic to replace.

I took pictures of the assembly – which I could use to shop for an appropriate replacement, searching online. Here it is. Washing machine door latch mechanism: 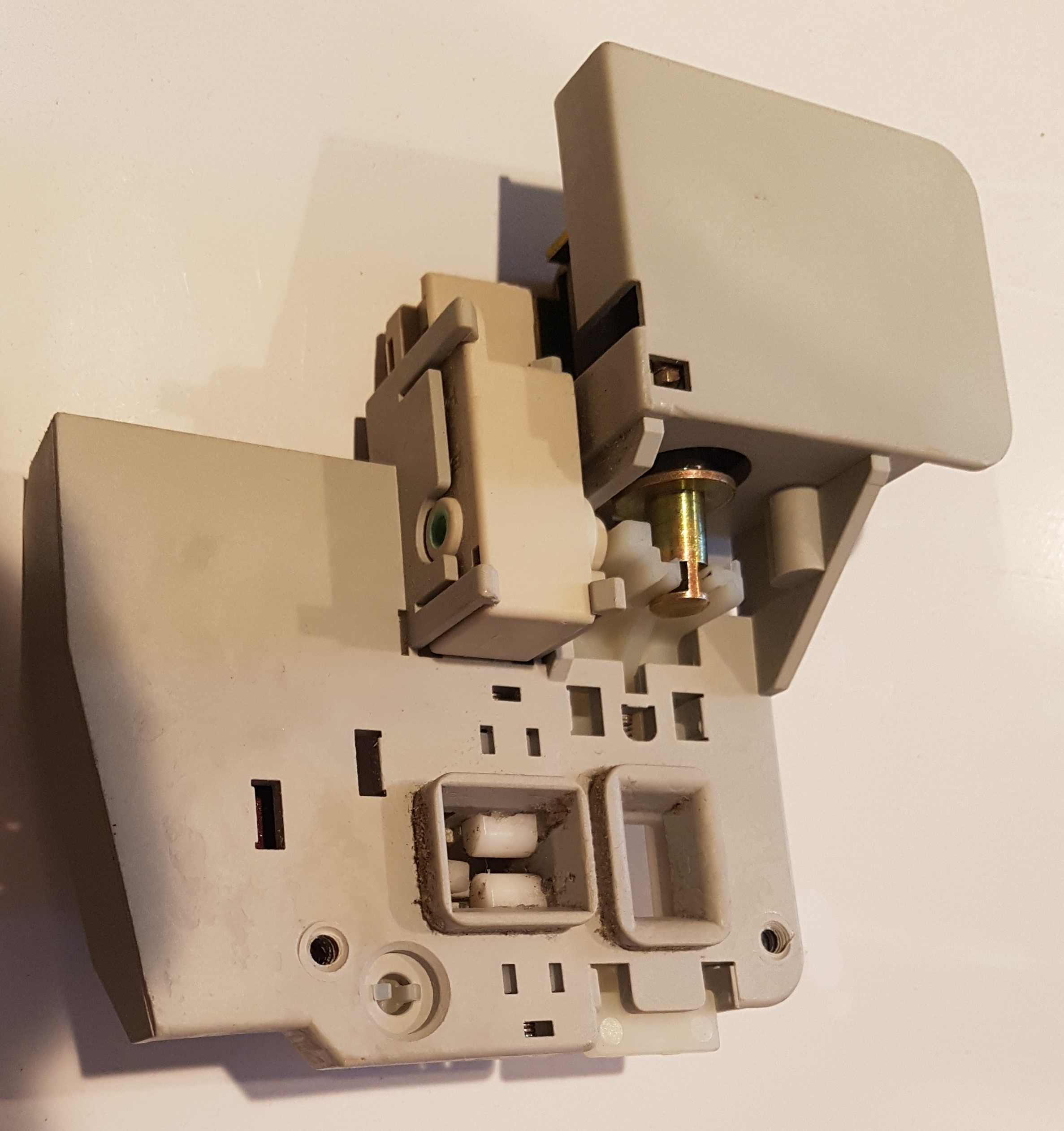 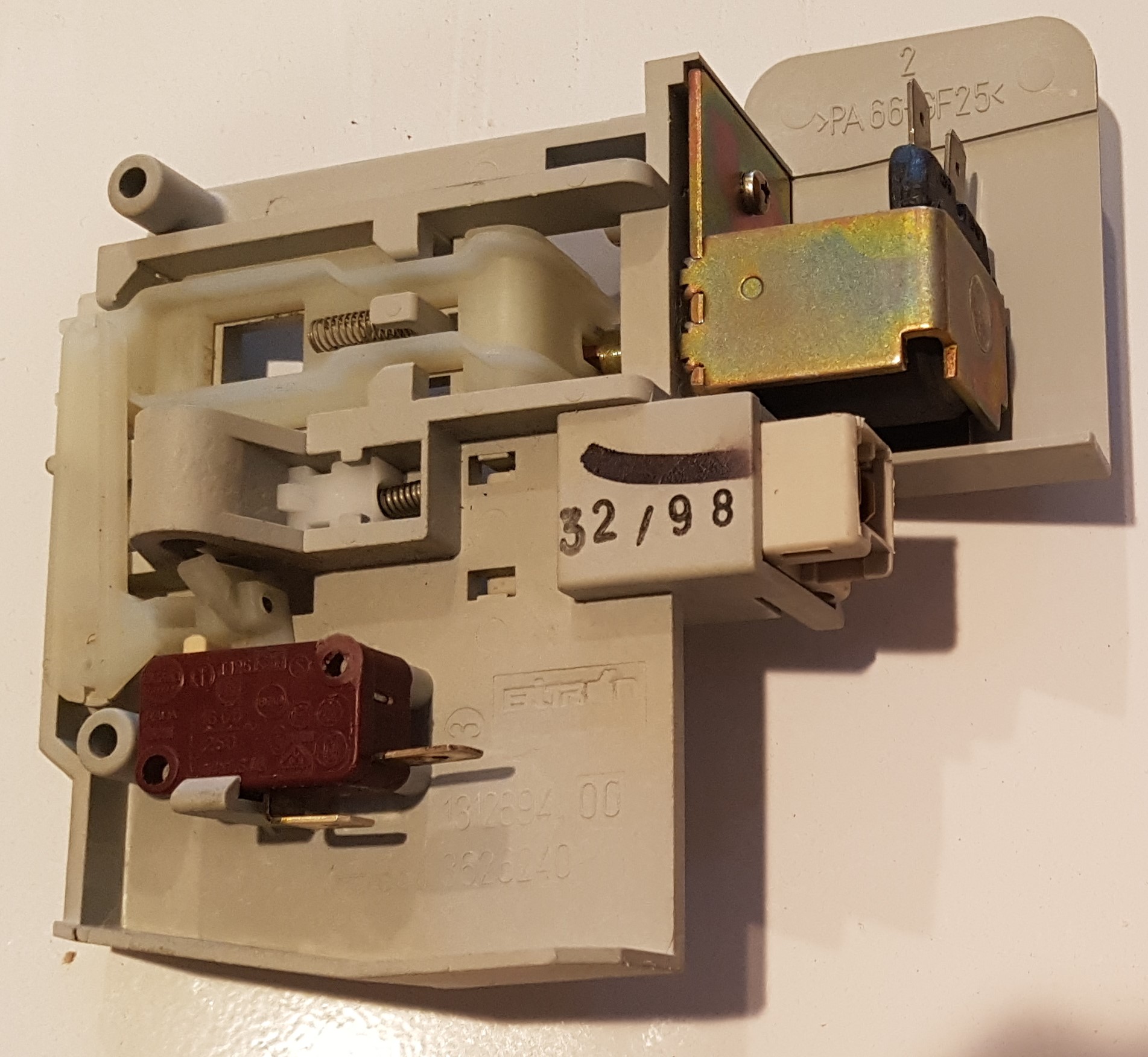 I decided, meanwhile, to try tinkering with it a bit. The problem seemed to be the actuator (“detector” of whether the door is closed or not), not the solenoid that locks the door. I wiggled the plastic switch connector, a mechanical relay between where the door latches into the slot and the electronic detector switch (lower left in the second picture, above). I thought maybe the mechanical lever was just misaligned. So I decided what the heck, and put it all back together.

I am officially a washing machine repair person. For a few hours, anyway. 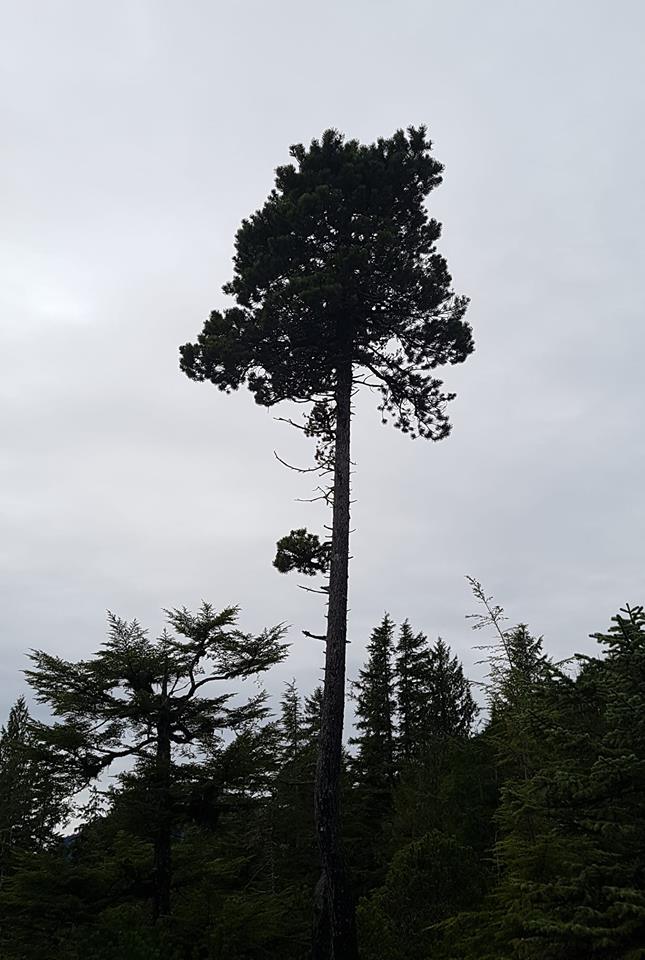 Well, there’s always another tree. That’s ice, on the muskeg water behind the tree. 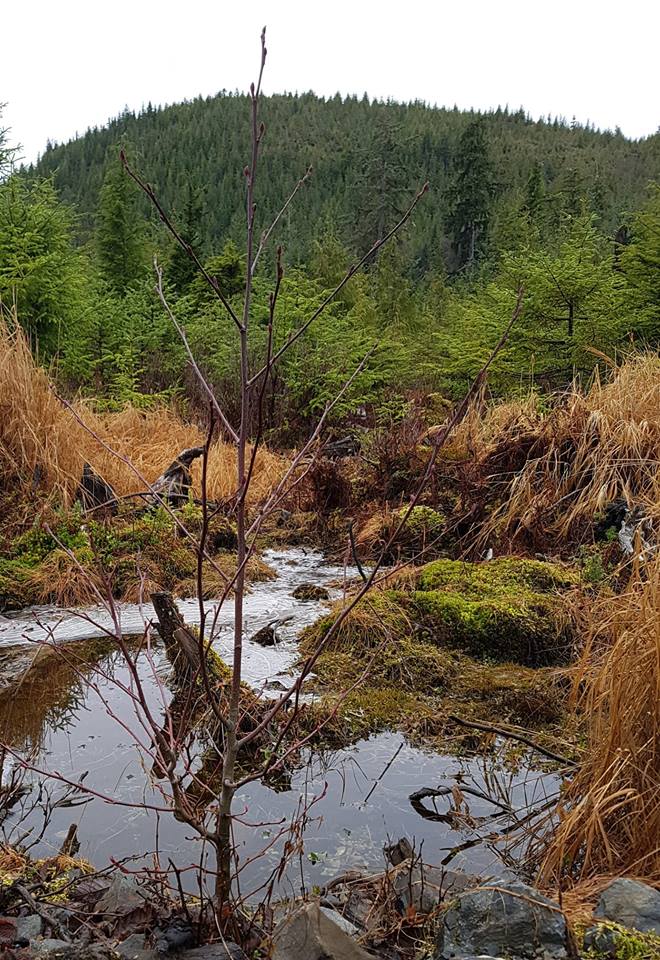 I’m spending a lot of time with the moldy boxes my “studio” prepared to greet my return to Alaska. Sigh. I have a lot of “stuff” that’s hard to define. I’m stupid. I don’t get rid of stuff well. I attach little nostalgic memories to everything, reviewing these possessions later queues up those otherwise lost memories. I like that. It’s helps me maintain the narrative of my life. It can be any kind of possession – old t-shirts, knick knacks, notebooks on classes, from high school 10th grade geography to an undergrad class on astrophysics to a graduate seminar on 19th century Argentine literature. All sigh.

Here is a tree. 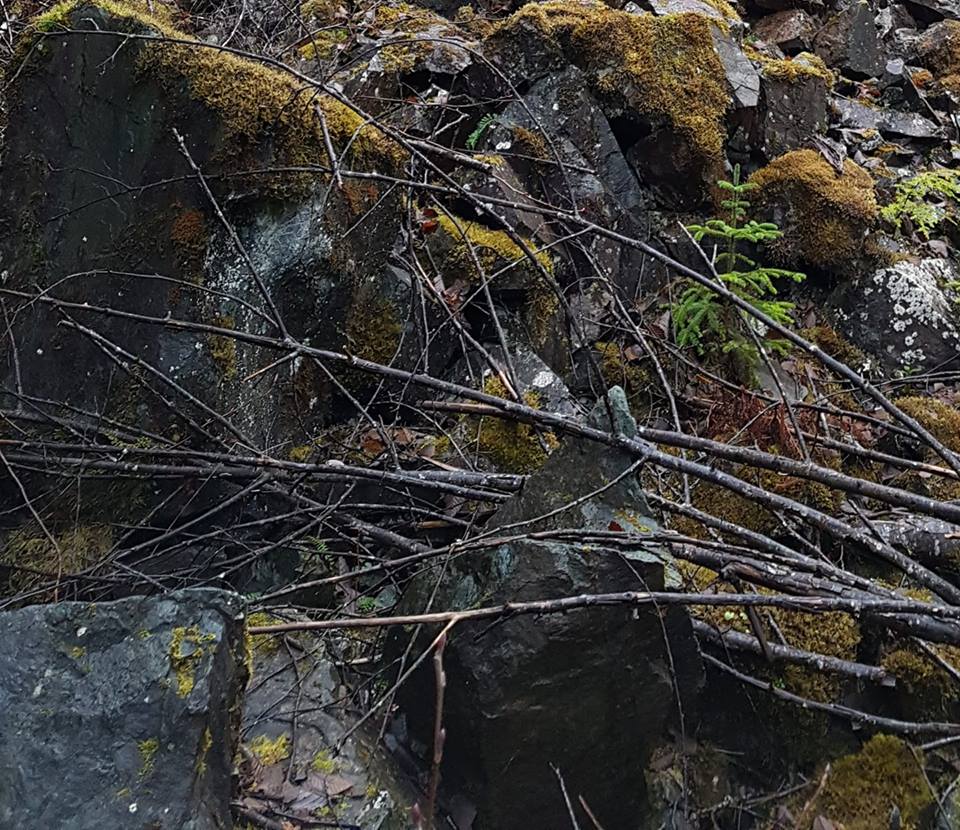 Here is a new daily tree. It’s a reflection in rain-speckled water, thus a bit impressionistic. 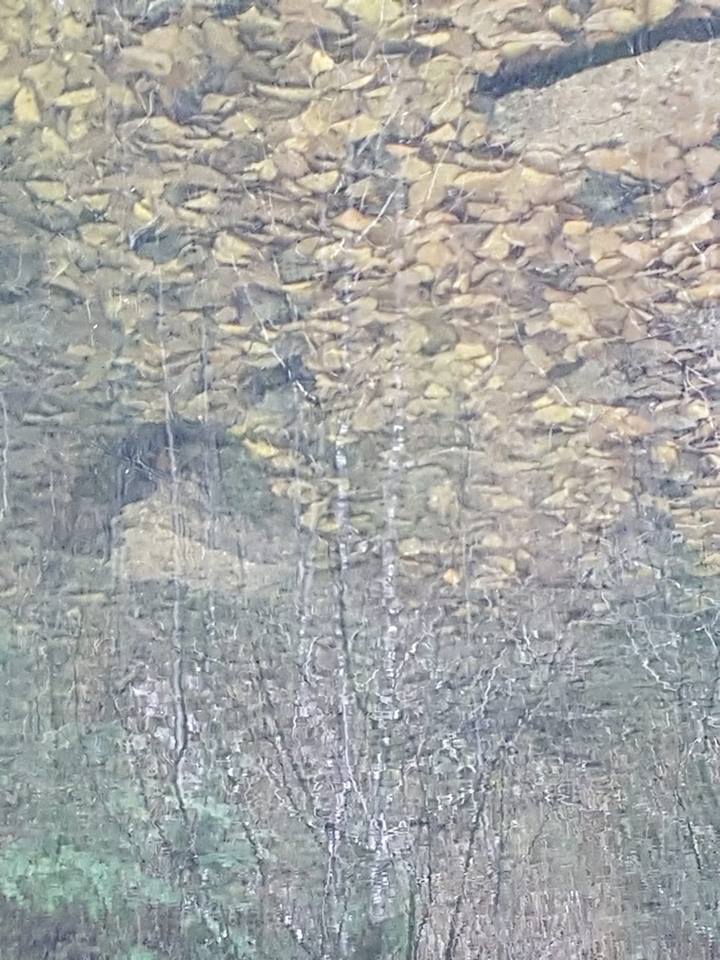 I’m struggling with a relapse of the cold I had for a while during my travels. Not really feeling 100% currently.

Also messing with the damp, moldy boxes from my storage “studio.” Disappointed it didn’t stay as dry inside as I’d hoped.

On a positive note, Arthur made his signature chili last night. It was good.

sleep
spirals
pulls me down
and attaches
with small, grasping hooks
pulls my organs aside
trying to find my worries
spinning them out like tarot cards
reading the divination of dreams 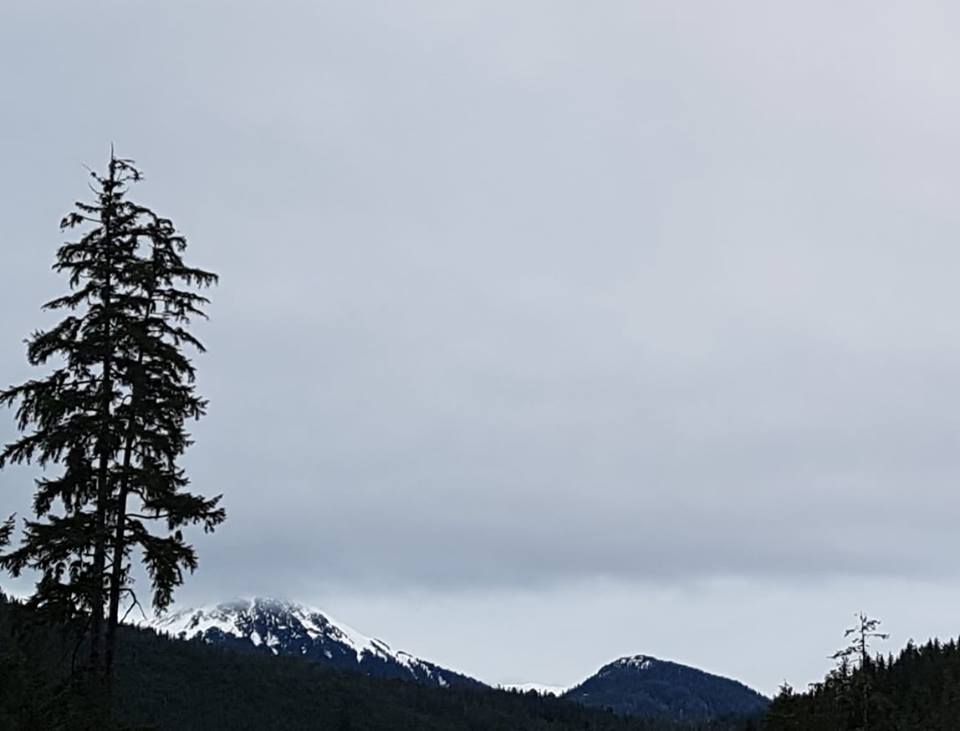 We drove into town to go grocery shopping. Arthur forgot his wallet. He was very grumpy about that. 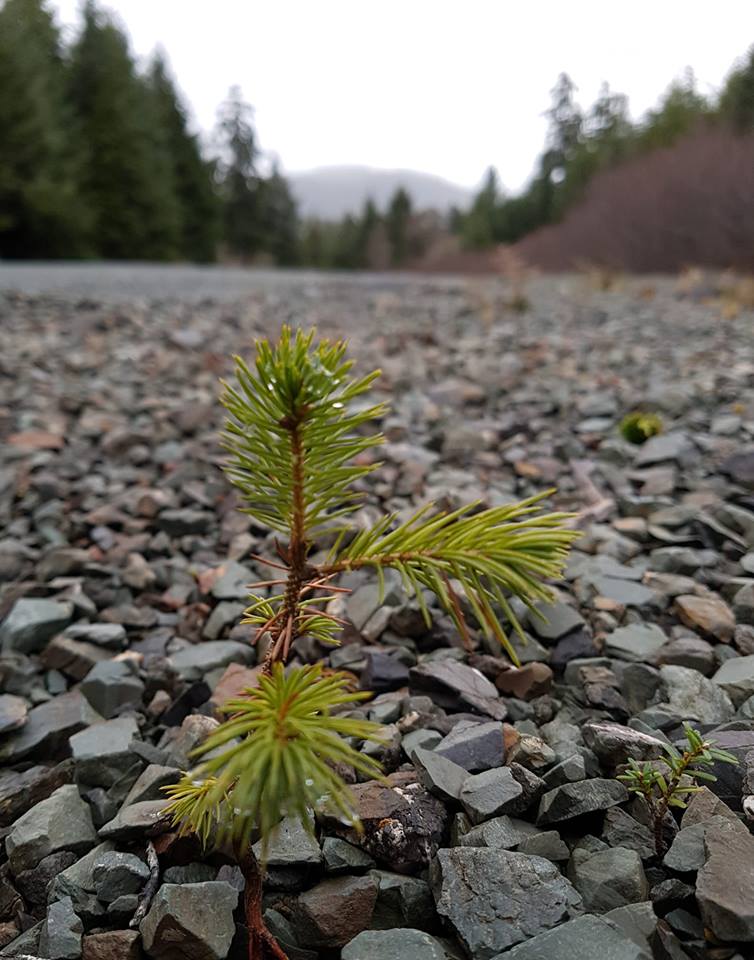 This tree is quite young.

Arthur and I got the water filter fixed this morning.

I’m feeling a bit discouraged because I decided to check on the contents of my “studio” (the storage tent in the yard) and realized that although well-sealed, the condensation moisture on the inside has been substantial enough to damage some of what was in there. I’m going to have to deal with that.

there are the potholes,
each day, gaping and smirking,
tasting the trucks’ tires 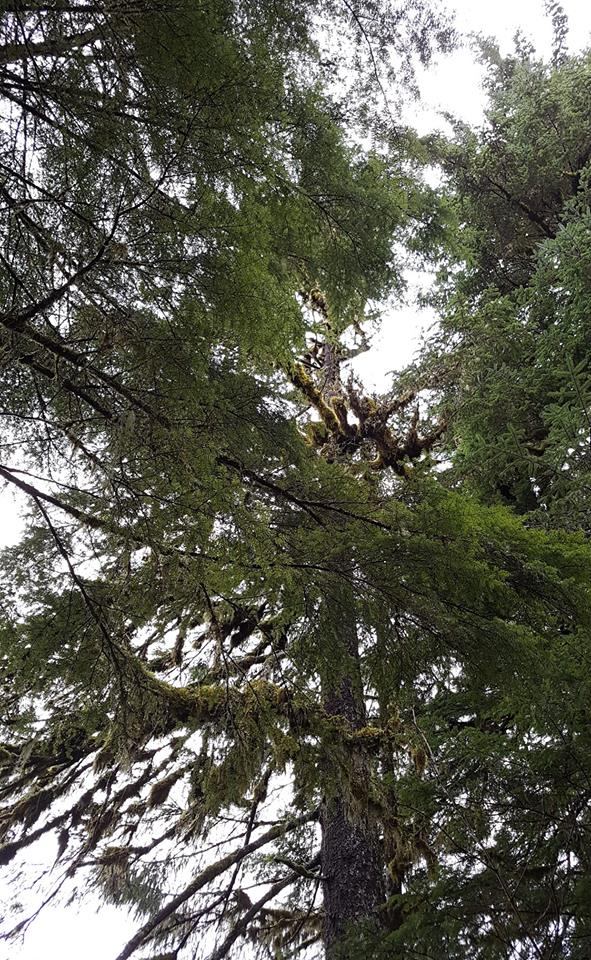 This morning, I placed the Rockpit, AK, sign that Arthur’s friend Wayne had given him for Christmas. Now our “town” is properly identified. 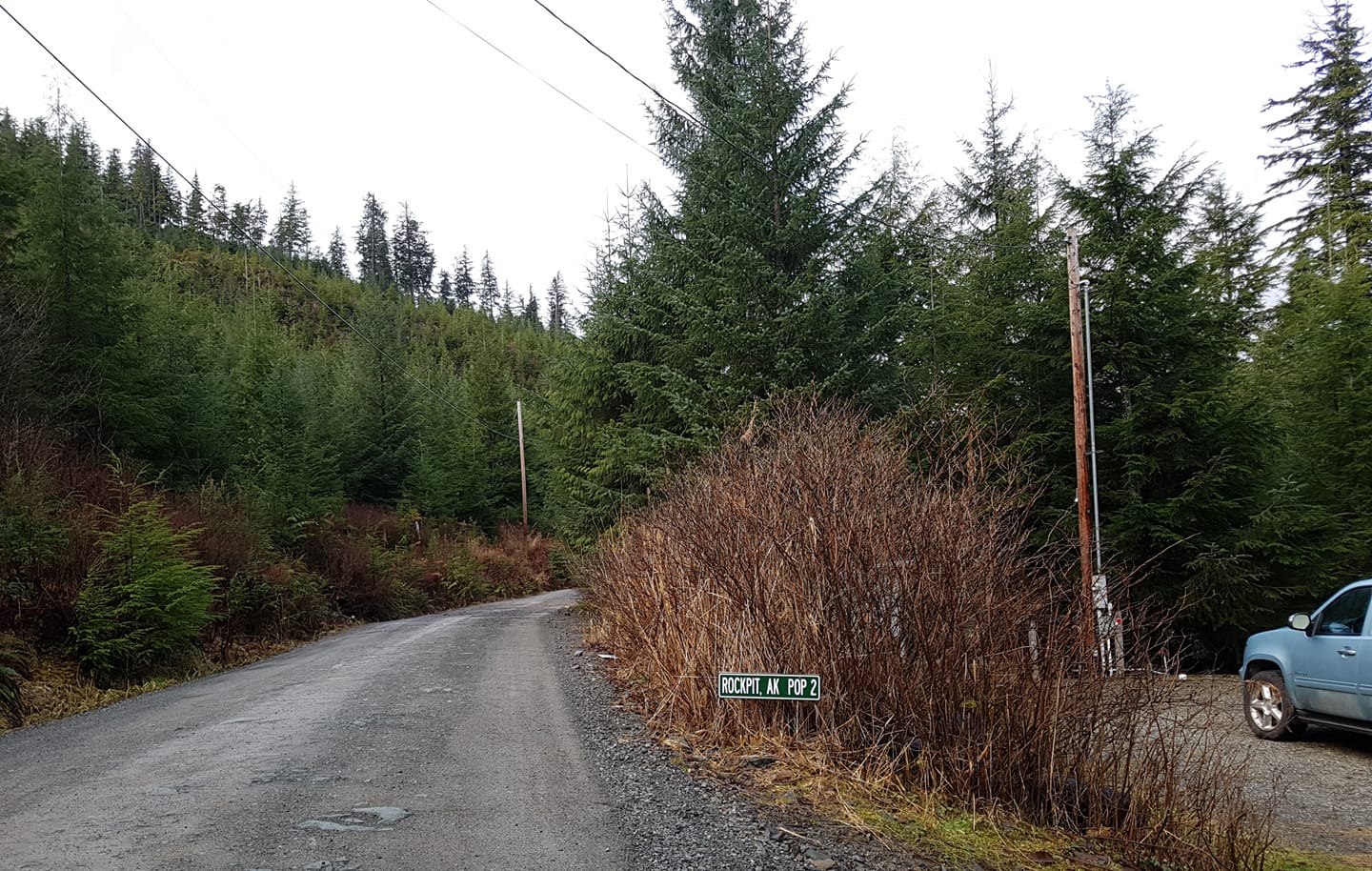 Midday, we drove into town because we have a leaky water filter we’re trying to fix, a problem that appeared when we reactivated the water supply after our long absence.

On our walk this afternoon, I saw Arthur sitting on a rock. He looked like a cantankerous forest gnome. 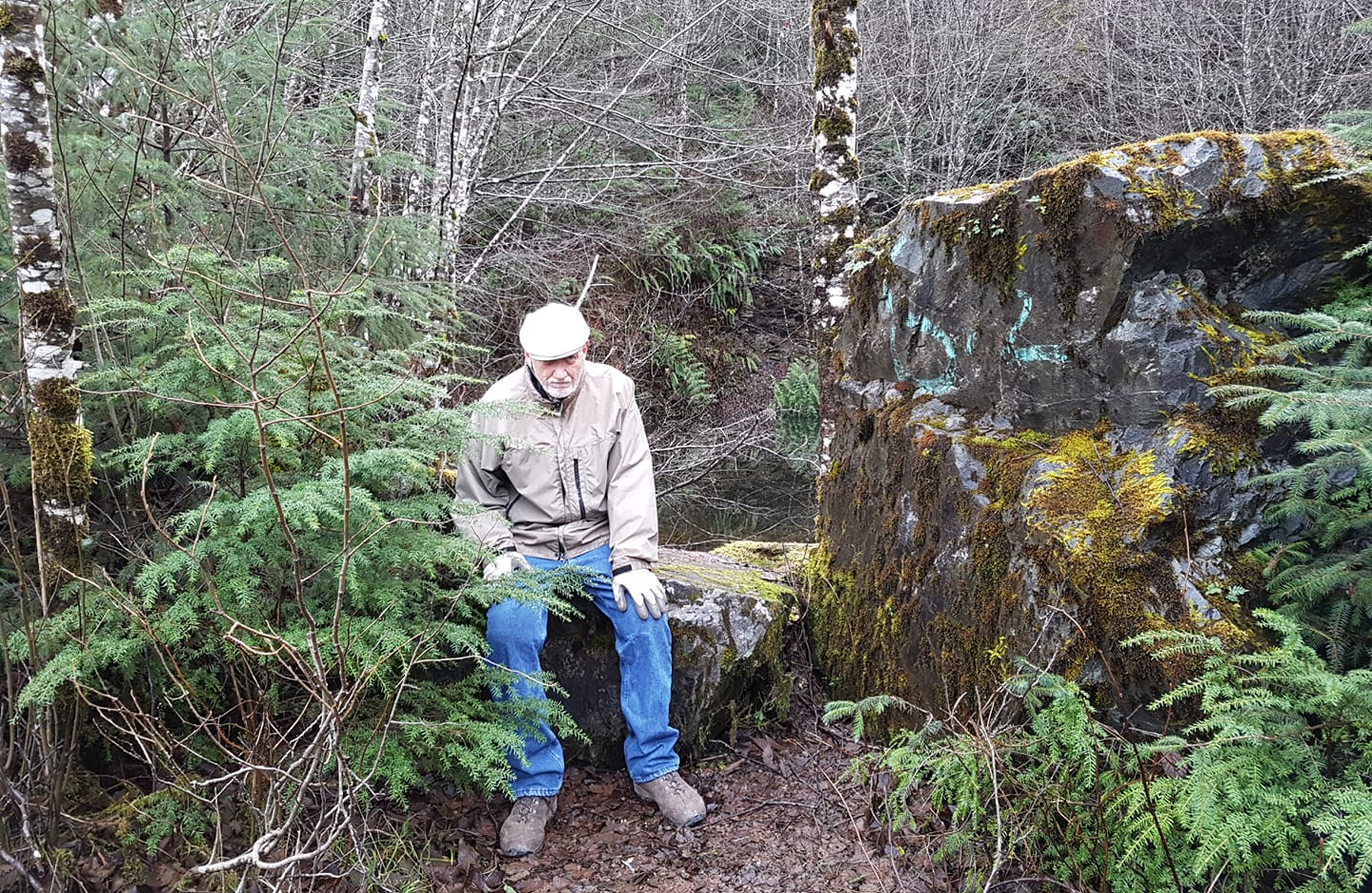 Tall,
distant,
hanging back
beneath gray skies,
a typical tree
hunkers down and faces
a glowering gale, groping
the nourishing ground with its roots.
The ground reaches back, lifting the tree
up
on
its
back

I had a kind of reunion with Arthur’s property here.

I went on a full circuit walk around the corners of the two lots. That sounds trivial, but in the highly overgrown, damp, boggy and slashy hillsides, it’s a major undertaking. I call it “tromping” as opposed to just walking or hiking.

I found the two strings I’d placed on the southern (uphill) property lines still intact, after 2 months of neglect. You can see the neon-green bits of string in these pictures. 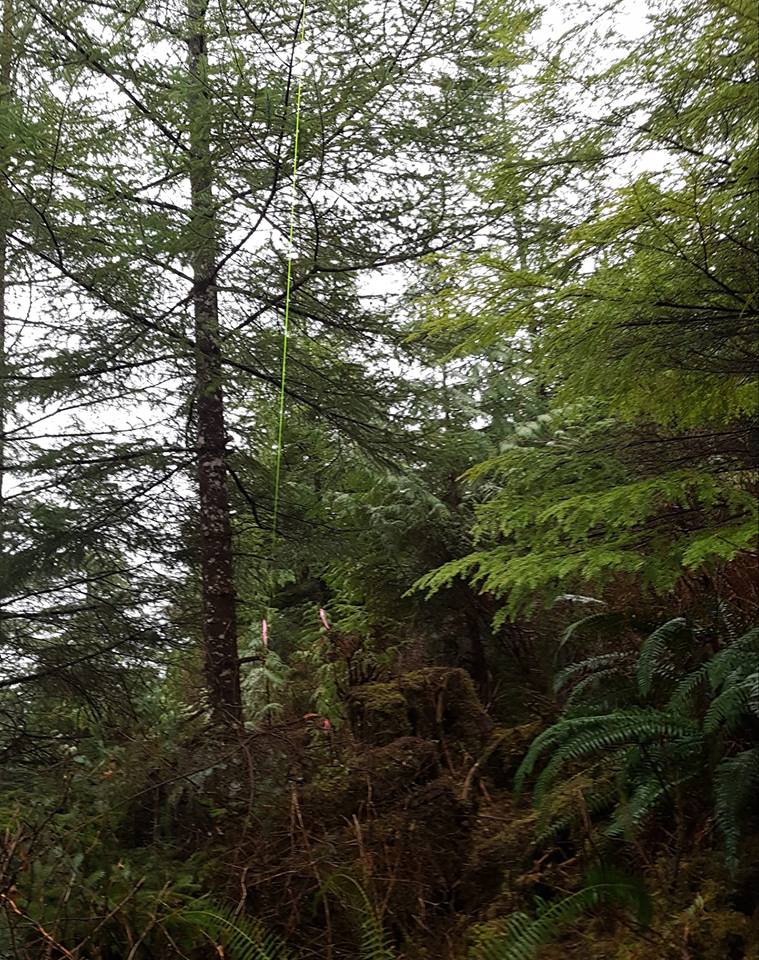 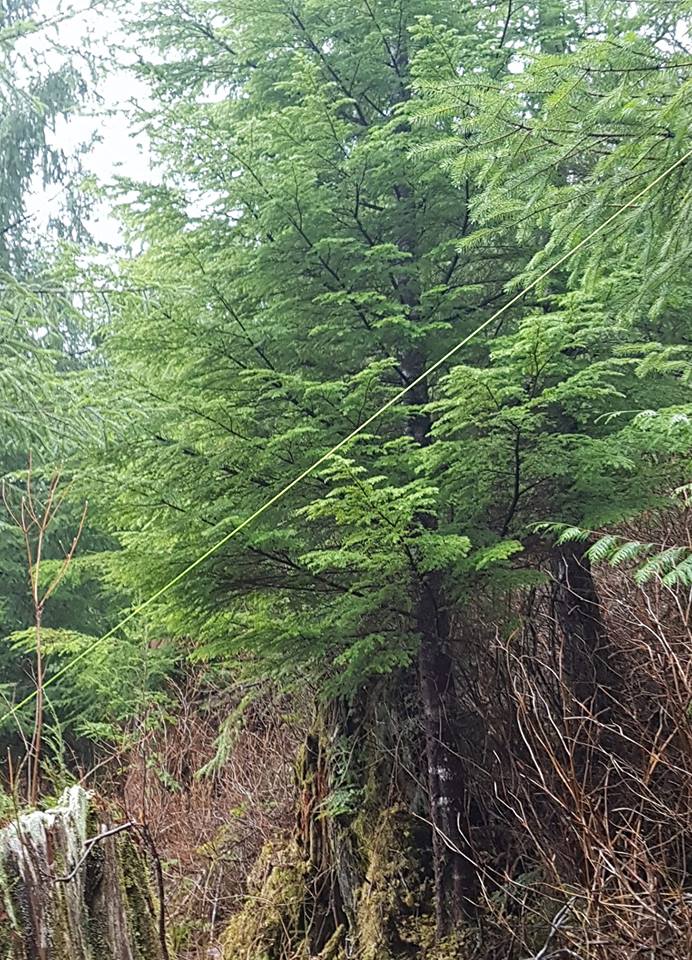 I took a picture of Sunnahae (“sunny hae”) mountain, with its snow, from up the hill.

Later Arthur and I resumed our daily walks down the road to the east. I found my “rock folly” (a random collection of found objects) at the mile 8 bridge still there. 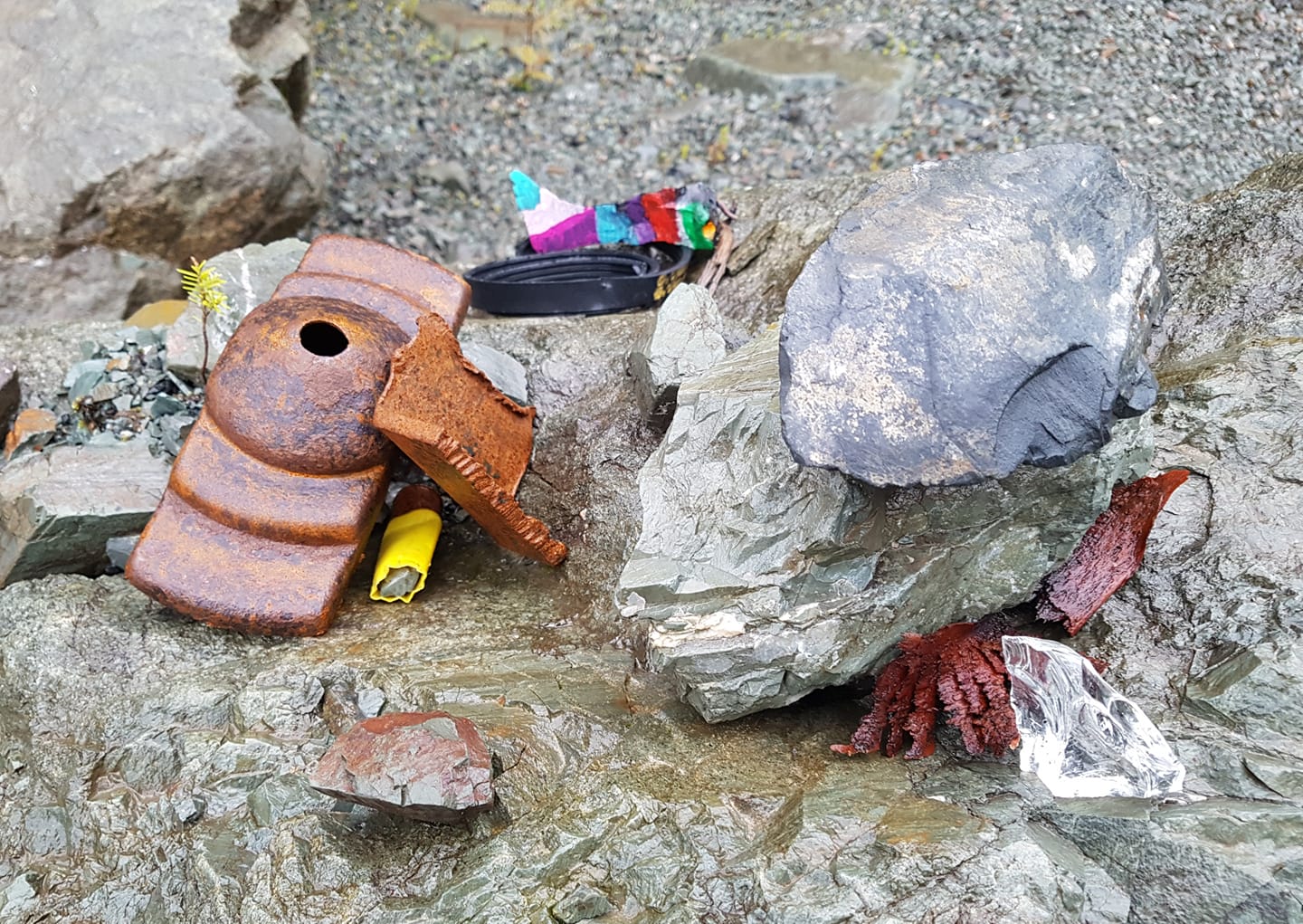 I took some pictures along the road. 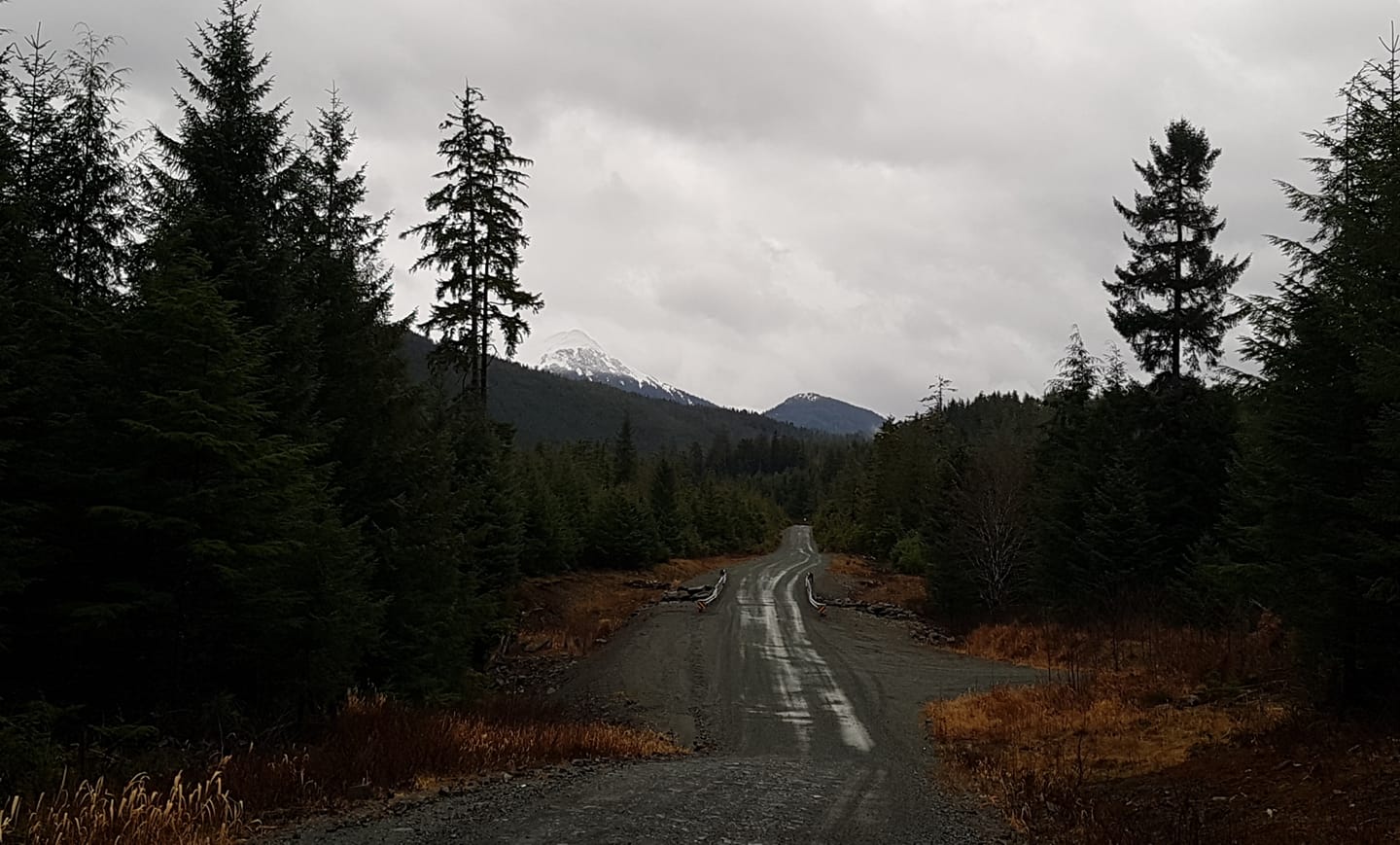 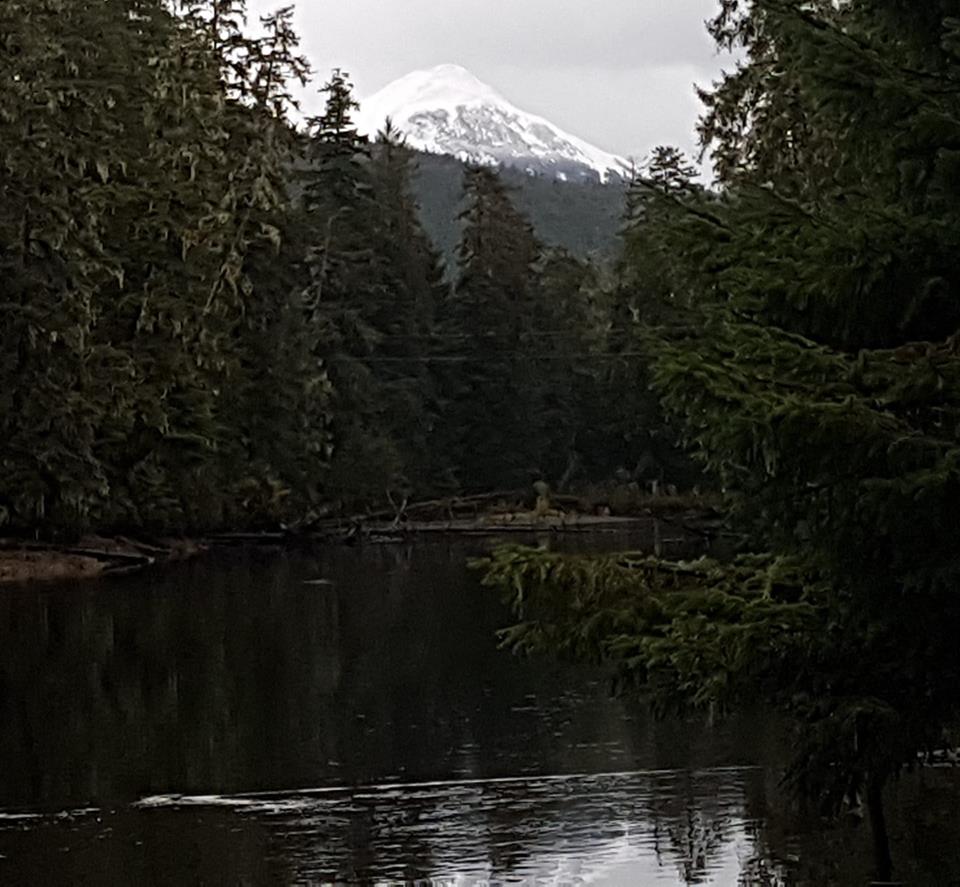 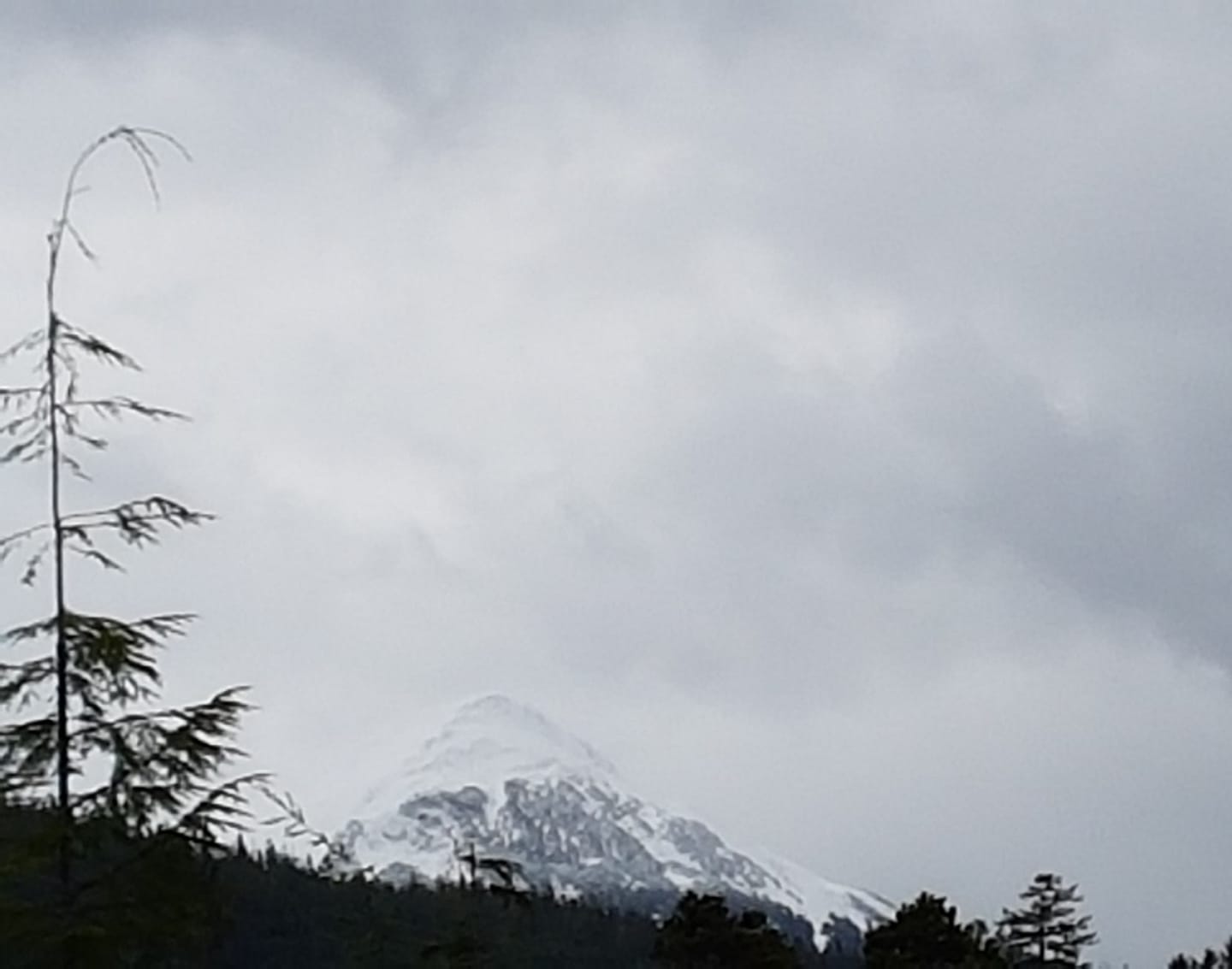 Here are some additional pictures from the time in Ketchikan, yesterday.

A trailer park with a view. 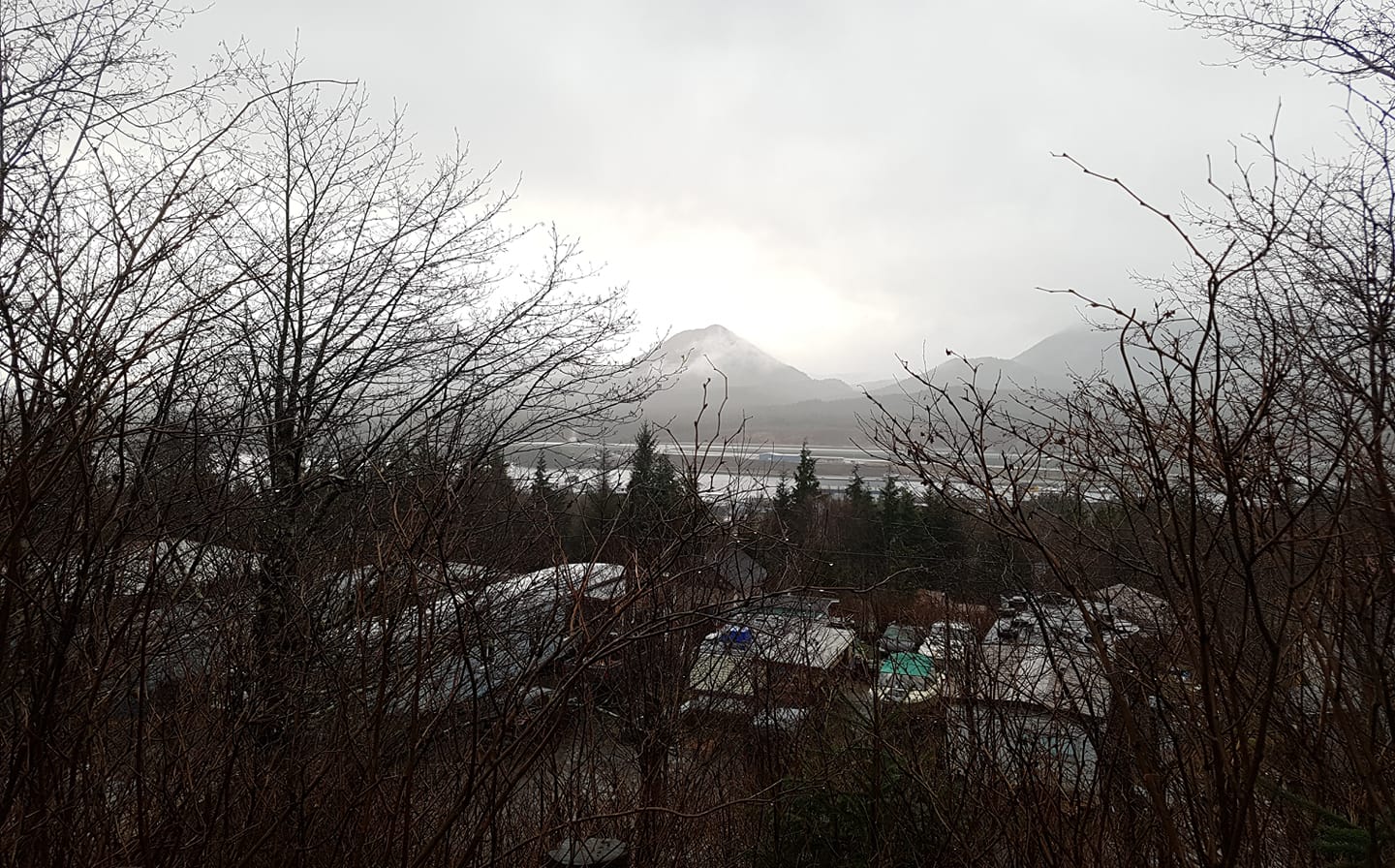 The dam at the Ketchikan reservoir, Carlanna Lake. 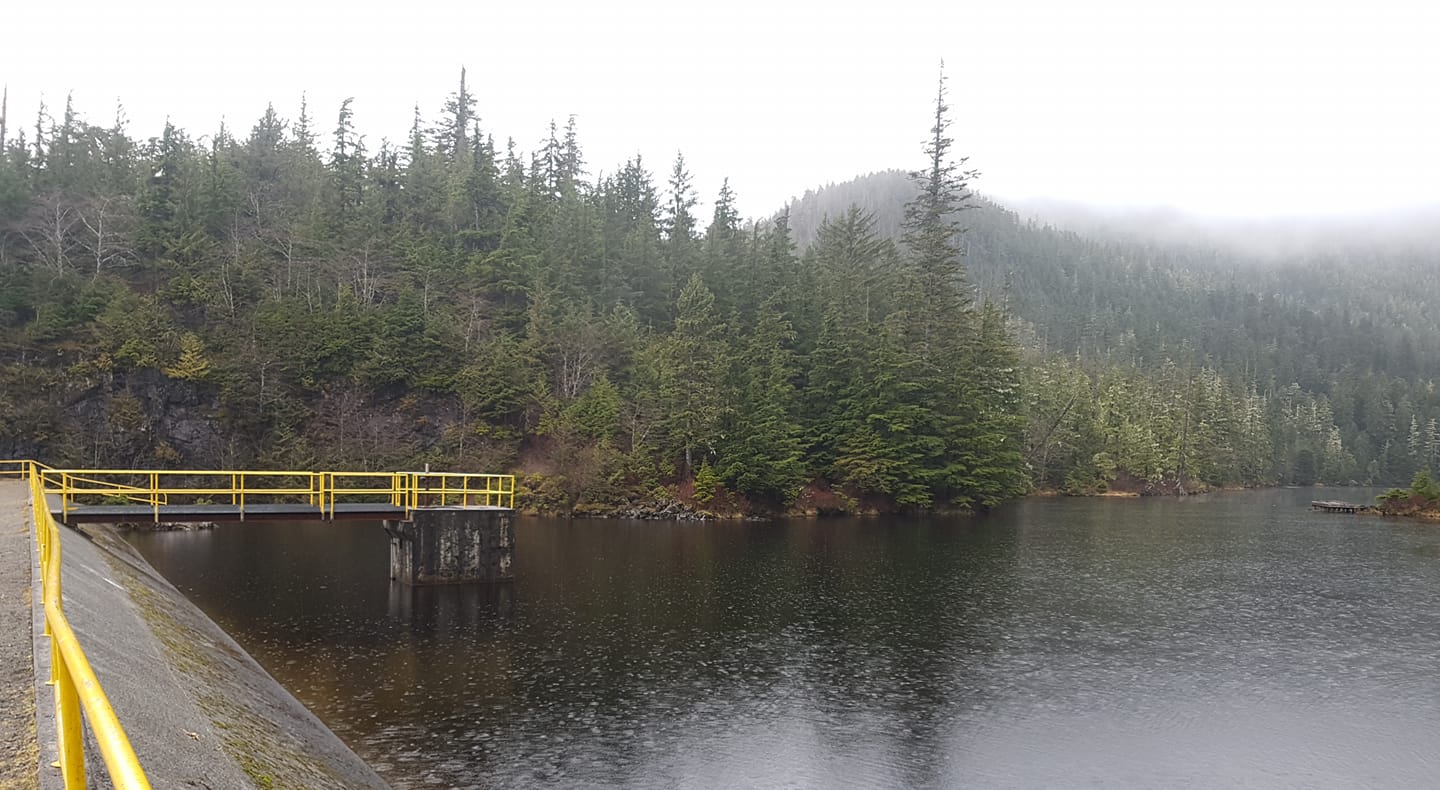 Sunset from the Hollis ferry. 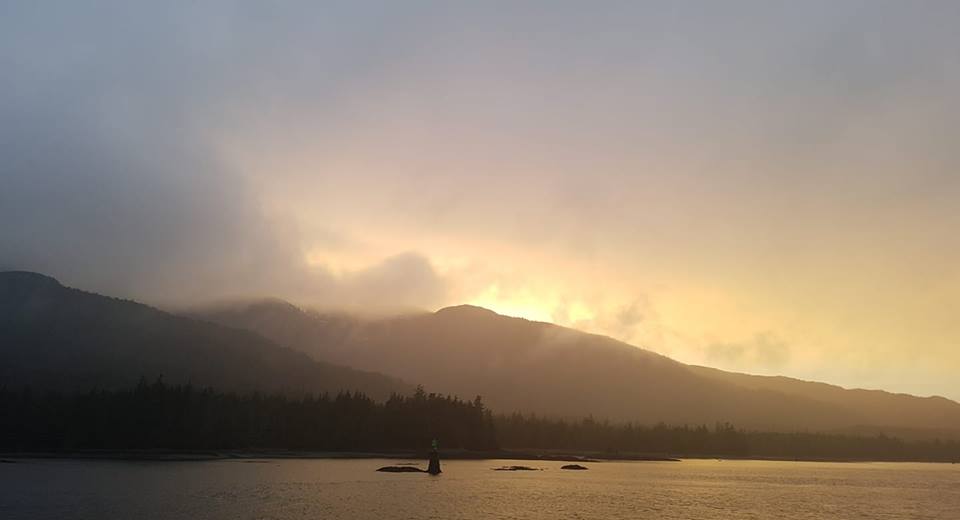 My trip odometer was 11034 miles (17757km) since departing home 63 days ago. That’s a lot of driving. And now I’m home. I think I’ll do absolutely nothing for a few days. A vacation to recover from my vacation. Hah.

Here is a tree I saw while taking walk in Ketchikan as Arthur and I waited for the Hollis ferry. 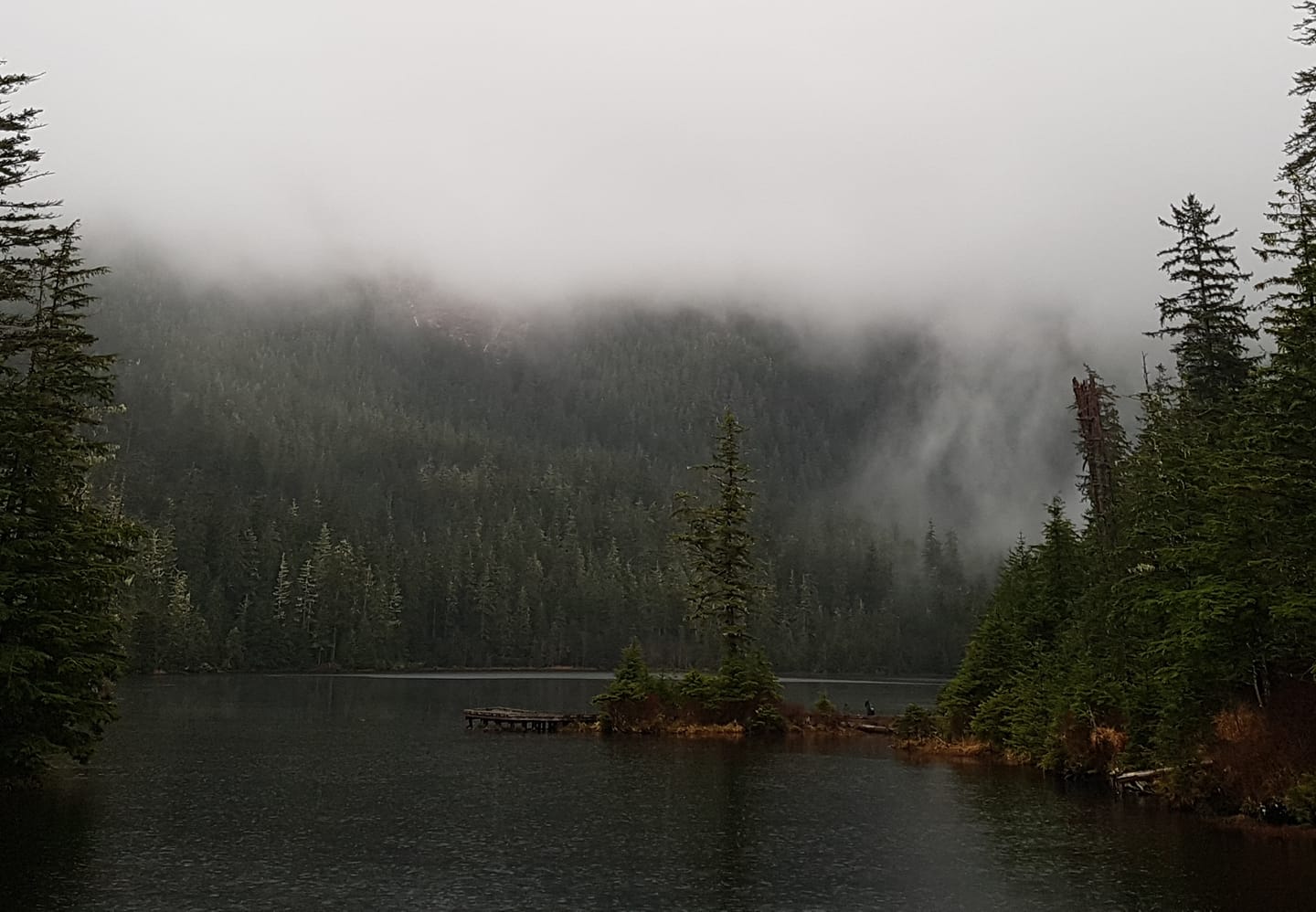 Sea
leaps up,
seething forth,
frothing, angry,
grasping at legs, arms,
ready to dismember
the hopes and dreams of calm trees,
which present themselves with aplomb –
even a grave, introspective joy.

Foam
wraps ’round,
entangles
her lissome limbs:
she surrenders
to the sea’s suggestions,
embracing the chaotic
frozen surges of lost borders.
The edge undefines America.