The Korean rainy season (장마) mostly seems to start like clockwork, right around July 1st each year. You can see it on my phone's weather forecasting app. 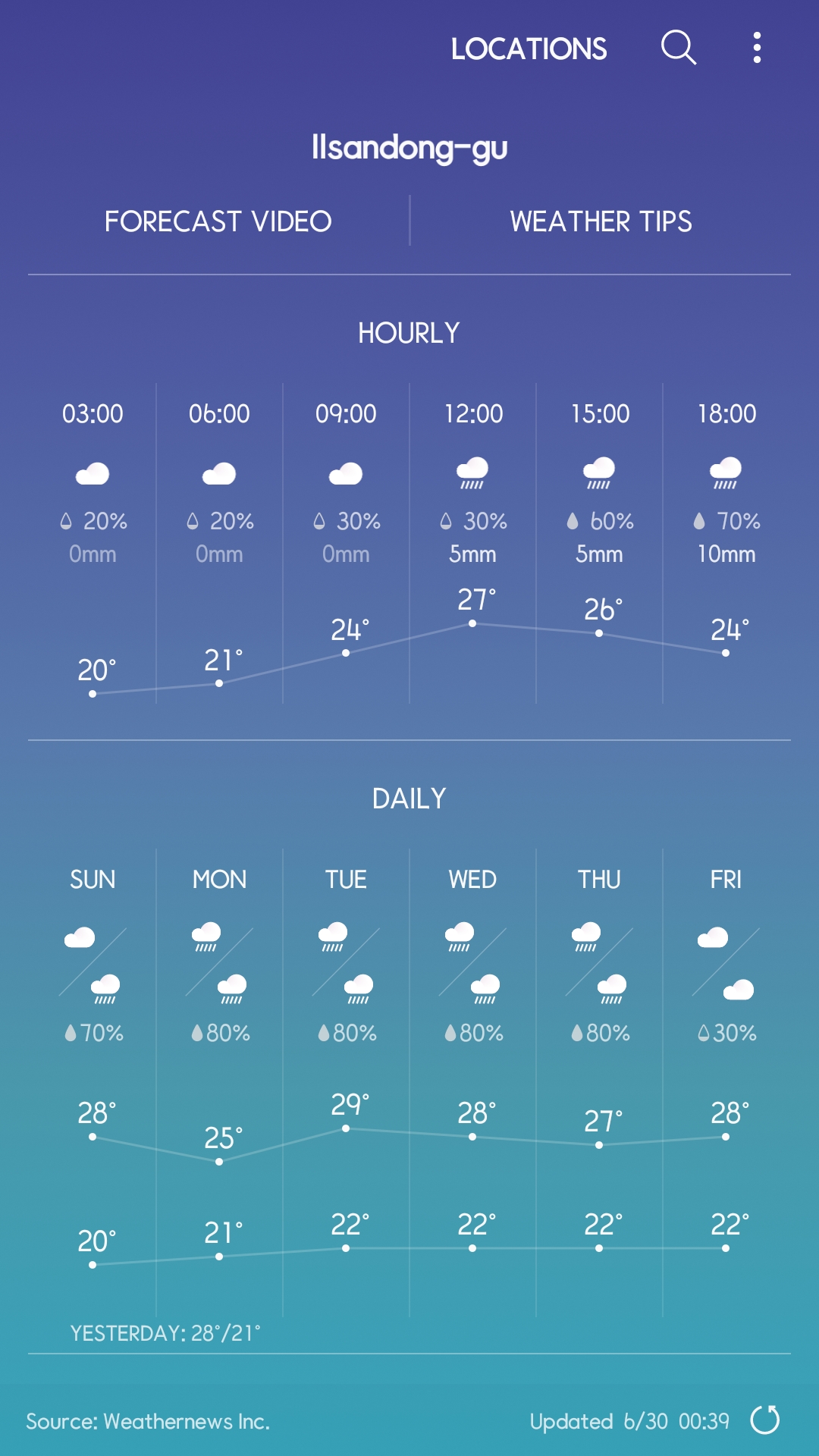 Or looking out the window works, too. Actually, it's been raining on and off already for the last few weeks. But the monsoon doubles down and just rains all the time.

The rainy season is probably my favorite season in Korea. Despite the sticky warm temperatures, the green dampness reminds me of my childhood on the far north coast of California, which is climatologically part of the Pacific Northwest.

Possessions make claims, demanding control
of your soul, of what you've planned,
where you stand.

This is a giant paper airplane. But it's not actually paper, but rather, styrofoam, I think.

Mostly I liked it because I thought some of my students would find it cool.

What?
Papers,
all scattered
across the floor:
a dull detritus,
a maudlin expression,
an emptiness manifest,
of my many years living here.
And soon I'll say "annyeonghi…" and go.

Curt and I were discussing my situation and imminent departure, and all the accompanying uncertainties.

He used the phrase, 잘될거야! 걱정마~ which he helpfully wrote down for me because he knows I learn best visually. 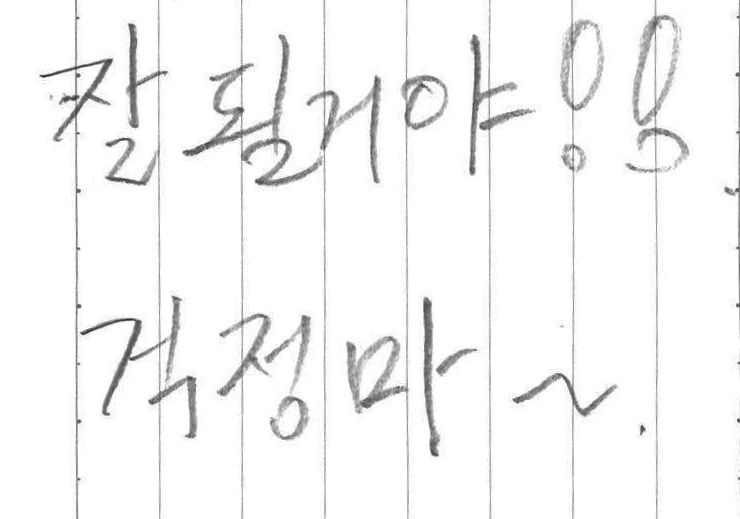 I more or less understood it but had never tried to parse it grammatically.

The “-야” verbal ending (not to be confused with vocative -야, which attaches to nouns) is one that I see and hear all the time, but I’ve never seen it explained in any of my grammar books.  I’ve labeled it “BE-FAM” above, for “BE, familiar” – meaning it seems to be a kind of slangy version of the copula that does’t get explained in grammar books. Or maybe I’m wrong and it’s something else, but anyway, I get the meaning of it.

Hello there, monsoon.
Did you come to paint skies gray?
Or just water the trees?

There is an apparent 5-year cycle to my existence. Maybe. Well, for now.

Five years ago this week, I found out I had cancer. That radically altered my life and outlook.

Now, I am once again undergoing a transformation in my life and outlook, partly in response to "fate," such as it is.

I commute by foot
for each day's epiphany,
brought by windspun leaves.

My sixth-grade student Seoeun raised her hand, yesterday, as if she had an urgent announcement.

"Today is today," she said gravely, and without hesitation. It was clearly something she'd planned out in her head, as one does when working in a foreign language.

One thing I did when I was in Portland two weeks ago was I bought a new laptop computer. I wanted to buy in the US because I could get a laptop with the Windows operating system in English – if you buy a laptop in Korea, it will speak Korean to you (meaning all the system error messages, all the setup and config, etc.), and Microsoft has a ridiculous policy whereby if you want to change an operating system's language, you have to buy the operating system again!

The reason to buy in Oregon, specifically, is that Oregon has no sales tax. So I bought the computer there. And now I have it here in Korea.

After more or less being content with my Linux-based resurrection of my old Korean desktop, it's a bit rough transitioning my computer habits back to Windows. Of course, I use Korean-speaking Windows at work, but I won't be taking my desktop back to the US, so I needed a new laptop for all my home-based stuff, especially my geofictioning and server-development hobby, such as it is.

Windows 10 is smooth and professional, of course, but it really gets on my nerves. It makes assumptions about the way a person might want to work, which run counter to how I prefer to work.

First and foremost, I had to kill off the deeply annoying Cortana. What is this, Clippy on opioids? Smooth but insidious, I was compelled to kill it off during my first hours of ownership. I have since had to find ways to prevent the system from insisting on connecting to my Microsoft account (if I want to share things with Microsoft, I'll do so on a case by case basis, right?), to prevent it from going to screen saver when I leave my computer unattended (how is this not a default-accessible option?), and to better manage how it behaves with respect to its power-management options.

Meanwhile, just for the heck of it, I got it running dual monitors, by hooking the laptop up to my desktop monitor as well as the laptop's. Thus, in the picture below, I can do email and websurfing on one monitor, while I hack around on my server on the other monitor. 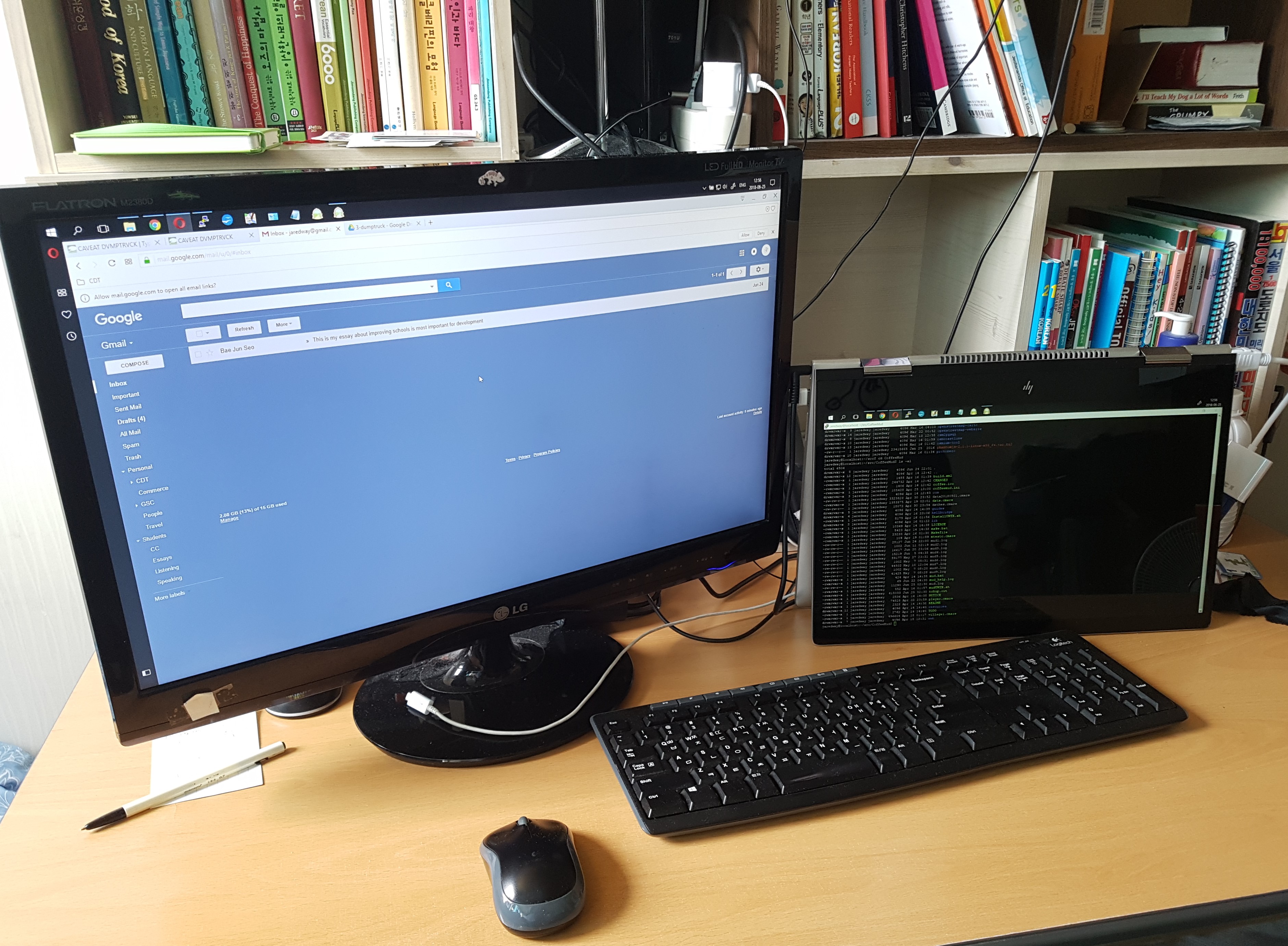 They want their statue back.

There are some boxes lying about.
Why does dust proliferate so?
I have to get organized.
Instead, I ponder things:
The embossed turtle
on my steel spoon;
the sunlight
coming
in.

The toy plastic alligators are a part of my teaching schtick – the kids enjoy them, including even the normally standoffish middleschoolers. But these "made in China" toy alligators break easily. I go through one every month or so, and some months I don't have one that works.

These past years, I frequently save the plastic alligators, whether out of some misplaced sentimentality or because I've got some vague notion of trying to repair them – I did successfully open and repair one once, so it's not an impossible proposition.

As I clean my apartment, I found my alligator graveyard. I briefly considered including them in a shipment back to the US, but I quickly realized that was silly sentimentality, and utterly unnecessary. I snapped a photo of the defunct alligators, assembled forlornly on my floor, and added them to my current trash bag. 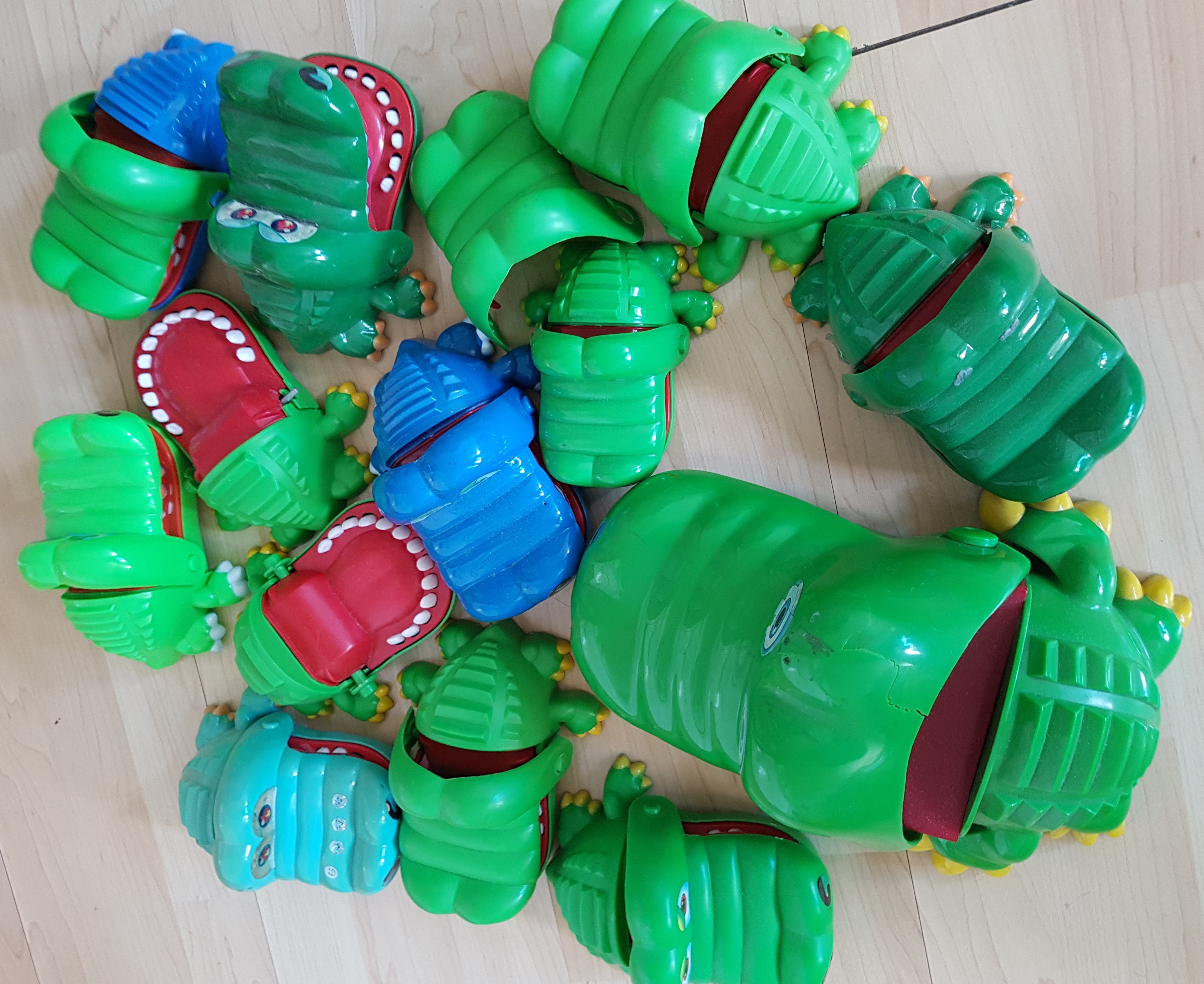 a self doubt creeps in
always with big decisions…
summer continues

I haven't had to deal with planning for a major move in a long time.

I went to buy some standard-sized boxes at the post office. It costs a little more than foraging for free boxes, but I like using standard-sized boxes where they are all the same. It helps me feel organized. These will boxes that I will ship back to the US – probably as "surface mail" which takes a long time on a boat but isn't that expensive.

The boxes from the post office are post office branded. They have a slogan in Korean and English printed on the side. The English slogan is a bit weird, because of the font they used. It sort of seems to say "May your day be filled with happimess" but I think the "m" is just a bad effort at a "sloppy" cursive-style "n". 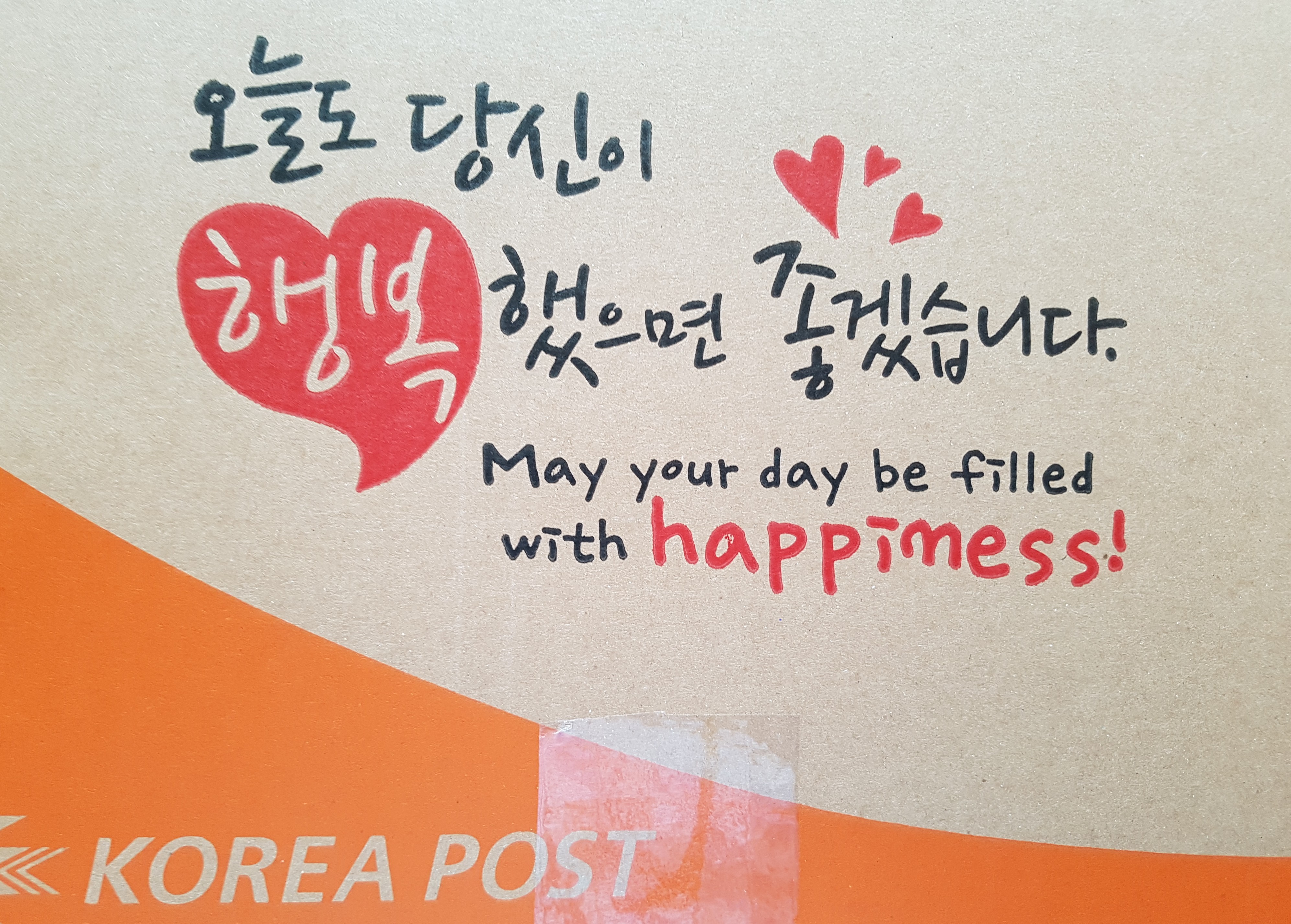 My mess isn't making me happy. It's giving me stress. That's why I'm starting so early – it'll help to stretch the packing experience out over the next month or more.

This Japanese TV commercial is quite funny. The cultural issues surrounding English education mean that the scenario applies equally well in Korea. Even the students who learn almost zero English nevertheless know how to answer, "Fine, thank you. And you?"

The unseen birds start
at some point before the dawn
that moment when the sky turns a grayish lavender.

Well, the details are not nailed down at all, but I've made it "official" – as much as such things can be in Korea.

I am ending my career as a Korean hagwon teacher and moving back to the US within the next 2 months. Exact dates will be determined eventually.

This is really hard for me, and I hate feeling like I am letting down the people (coworkers and students) at Karma, where I have been working these past 7 years. But it feels necessary.

I met with my friend Peter this morning, and we talked for a while and had lunch before I went to work. He's back in Korea having just finished his Master's in Korean Studies at Johns Hopkins SAIS (which is in DC). Very impressive accomplishment, in my opinion. And now he's networking and thinking about his next move – some kind of job, obviously, but he seems willing to take his time and find the right gig.

His quizzing me on the whys and wherefores of my big decision were helpful. He has a way of getting me to think clearly about my intentions and motives.