How are you today?
I am fine thank you, and you?

Update, later: No news is good news, right? So I guess things are OK.

– This nonnet is a “response” to Jeong Ho-seung’s poem that I posted earlier today.

One thing that happens every time my friend Peter leaves Korea is that I get a pile of books. I am his Asian book storage facility, because he knows I appreciate them.

One book he left with me is a book of poems entitled “A letter not sent” by Jeong Ho-seung (정호승). The book is bilingual, which I like, with translation by Brother Anthony and Susan Hwang. Brother Anthony is a Catholic monk based in Seoul and prolific translator of Korean poetry – I’ve written about him before on this blog. Peter actually seems to know the man through their shared membership in the Royal Asiatic Society.

I particularly liked this poem (note that I copied the poem’s text from the book, so any strange typing mistakes, especially in the Korean where my typing skills are imprecise, are my own and not in the original).

Above all else
rice on display should not be eaten;
if you must eat it, you should eat it alone;
otherwise you should fast;
by fasting you will grow lighter.

From time to time
on windy days,
you should mix grass with sunlight and eat that;
and should you still feel hungry
you should do away with your mouth.
– Jeong Ho-seung (Korean poet, b1950)

One comment on the title. The translation of the title, “How to Eat,” isn’t completely literal. Literally, it is “Rules for eating rice.” But “eat” and “eat rice” are essentially synonymous in Korean (in a way that can sometimes lead to confusion for Westerners).

I very much prefer the literal title, and I think the poem is playing with the semantic overlap between “eat” and “eat rice” which means the title should include “rice.”

I have written a nonnet as a kind of “response” to this poem. I will post it tonight as my daily nonnet.

Some years ago, I guess, the children's TV show Sesame Street presciently deconstructed the Trump phenomenon.

I went into Seoul yesterday to bid farewell, once again, to my friend Peter.

Mostly it was just hanging out and watching him finish packing. A few of his other friends came by, too. I'm not sure my social skills are very good, anymore.

It was a cool, windy day, relative to the recent oppressive heat of August. A squall of rain crossed the city as we were leaving. The air was quite clear and the clouds were many stark shades of gray, like an abstract coloring book pattern in the sky.

Here is a picture of Peter, with a friend of his, and me, after going out in the street from his apartment (well, former apartment, now). In fact it is raining lightly in this picture, but it's hard to tell. 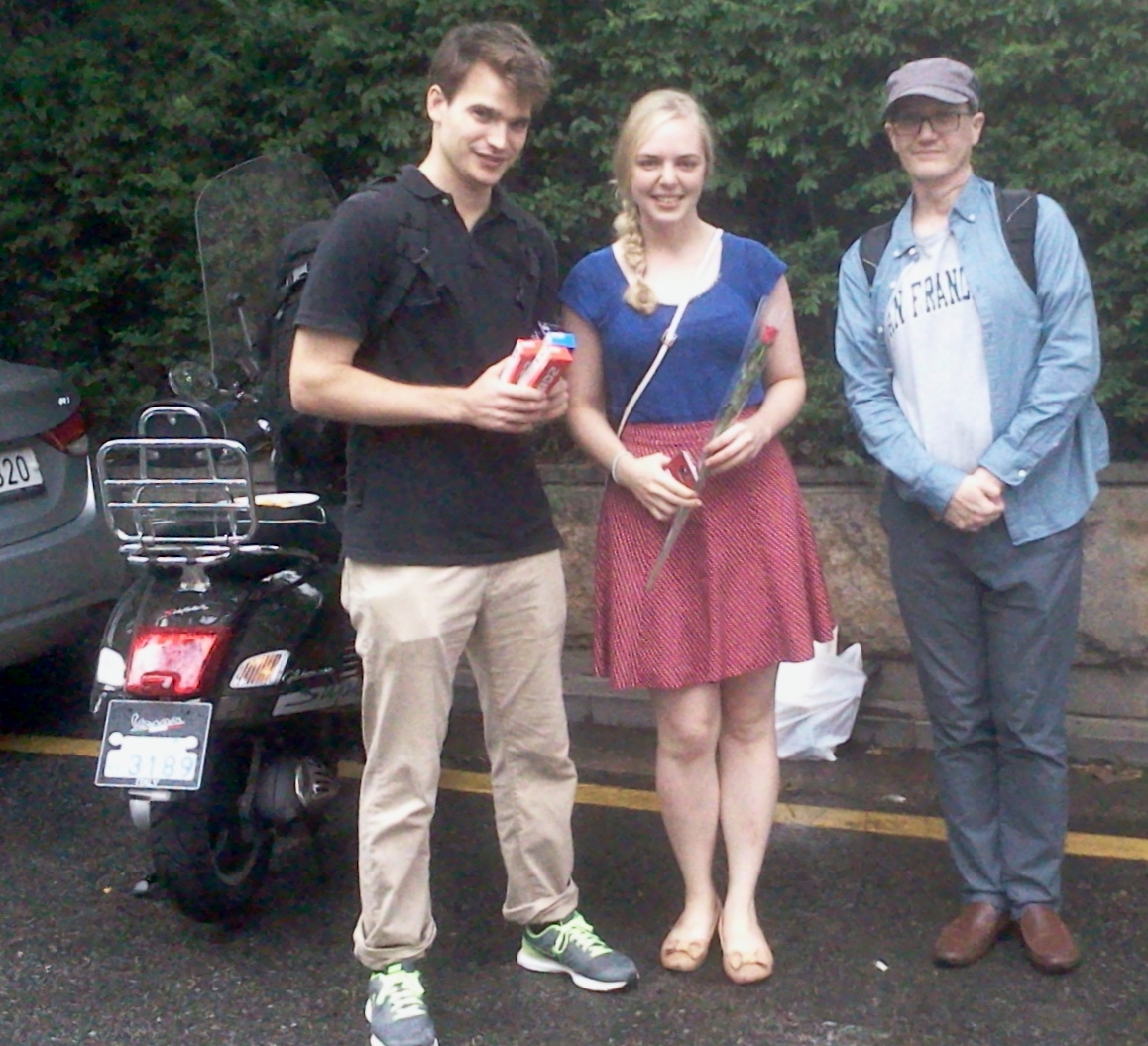 I've been feeling a lot of stress, lately. The work cycle is at that typical September peak, as kids start their Fall semester at school, we wrap up the summer special classes, and enrollment starts heading for that hagwon-biz Fall surge. I have month-end writing tests to score, student comments to write, and new student interviews.

Further, there has been a kind of rumbling of parental dissatisfaction with the current state of the curriculum in the youngest cohorts. That means lots of wasted time in incoherent discussions and meetings about curriculum, and the resulting decisions which, inevitably, will not be the ideas I advocated for.

Layered on that is the fact that September 1 is the annual contract renewal date, which always forces me to contemplate, once again, the occasionally Faustian nature of my current, complicated, and unsatisfying relationship with my job, my host country, and the Korean healthcare system. It is easy to begin to wonder if it's all worth it.

Additionally, I was "volunteered" for some extra work, at work – of the least favorite kind, which  involves sitting and mucking with a computer trying to transcribe some simply atrocious English conversations: Bad, non-native speakers talking buzzword-filled English to the worst kind of consonant-glottalizing, modal-verb-abusing, corporatese-spewing Britishers with stunningly loud background noises and interruptions. I feel like my willingness to be helpful is being abused, and of course it's hard when the utility of the work at hand seems dubious at best.

I have a hospital appointment coming up, too. I always dread those – anticipating them is much worse than just being there dealing with it. Having moved past the worst of the jaw necrosis problem last Spring, I enjoyed a relatively hospital-free summer after the Big Anniversary Scan in July. So my "just deal with it" reflex is rusty.

All said and done, I feel unhappy.

I am going to Seoul today to bid farewell (version 3.0? 4.0?) to my friend Peter, who is once again returning to the US, this time to start graduate school.

Did you hear about the guy that got the left side of his body cut off? He’s all right now.

I learned this four character aphorism on my building’s elevator last night.

It can be made into a descriptive verb, too: 강고무비하다. The underlying meaning of this 고사성어 seemed more transparent than most – the dictionary definition given for the aphorism is simply: 비교할 수 없이 굳세고 단단함 (Incomparable firmness and strength).

In my low-level TQ cohort, including second and third grade elementary students, we were practicing a very low-level "interview" format, starting with "What is your name?" Beforehand, I had given them formulaic "frames" where they could fill in their answers, and had helped them fill them in.

Teacher: "What is your favorite color?"

Teacher: "What is yoru favorite animal?"

I found these two videos rather fascinating – essentially, in both cases the presenters step through discussing various dialects of the British Isles while at the same time reproducing those accents quite well.

I have a difficult relationship with various English language dialects: on the one hand, I find them fascinating and I work hard to be able to tell them apart; on the other hand, I am utterly incapable of consistently reproducing them in a sustained manner, which is weird to me, because I'm actually somewhat able to do something similar with various Spanish dialects. Is it perhaps that my own mother-tongue – Northern California English – is too deeply embedded and thus I can't seem to override it, while with Spanish, since no single dialect is deeply embedded, I'm more able to shift around the dialect space? Or, more likely, perhaps I'm really not that good at doing it in Spanish either, but I'm sufficiently incompetent that I don't realize what I'm doing wrong.

UPSIDE DOWN can be spelled upside down using right way up letters of the alphabet:

Note that this only works if you use a font with a "double-storey" "a" - which is to say, if you use a "single-storey" font like the notorious Comic Sans, or anything in italics, it doesn't quite work: 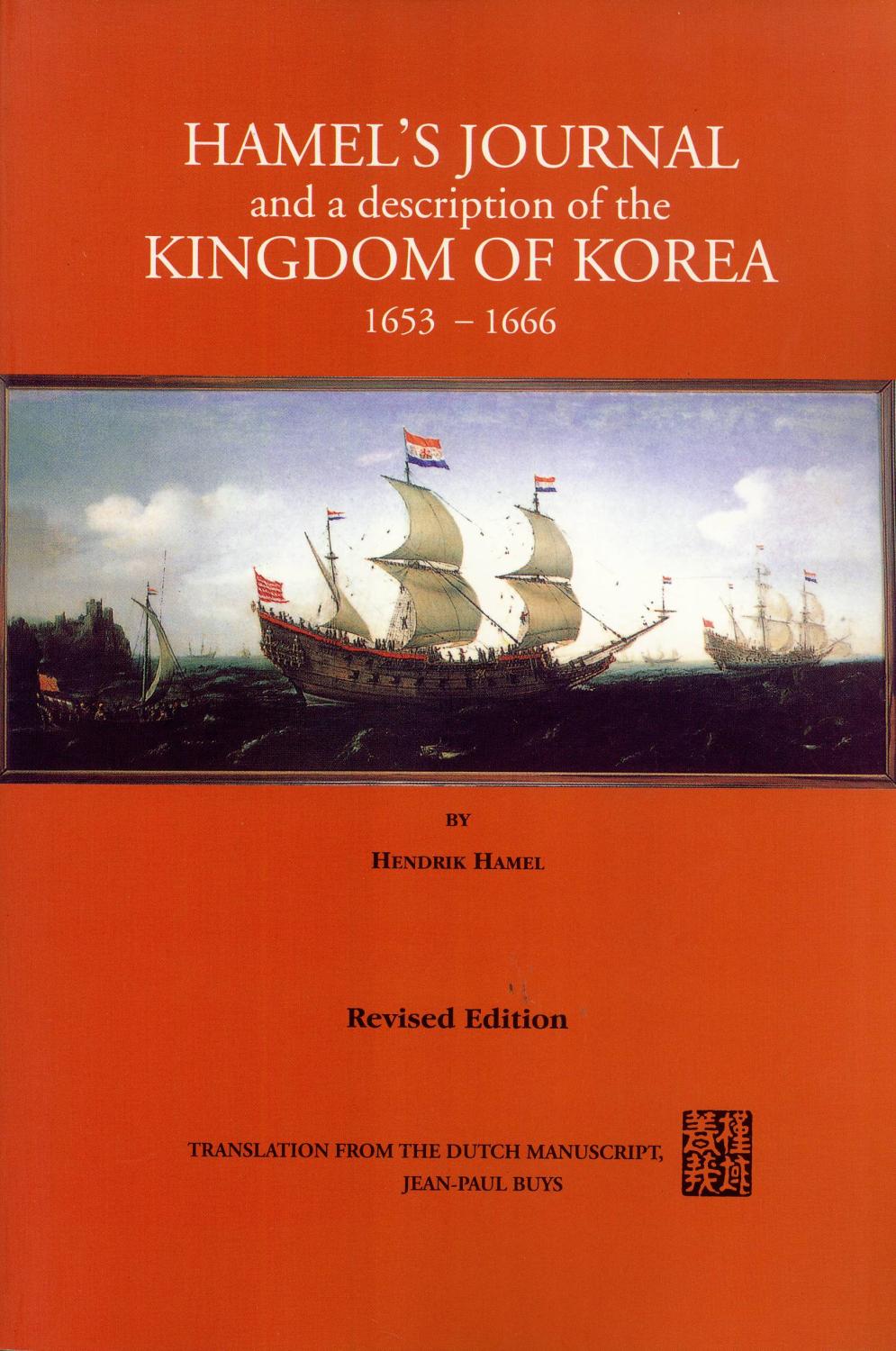 A few weeks ago I finished that book my friend Peter loaned me – Hendrick Hamel's Journal. Essentially, I read it in one sitting – it's not a long book. Peter guessed correctly that the parts I found most interesting were the appendices and footnotes. In general, however, it reads pretty well – it is a remarkable gateway to a truly alien world: a 17th century Dutchman stranded in an even more alien 17th century Korea. Yet I was impressed his remarkable equanimity and his refusal to categorically condemn his captors (indeed they made him a slave, which was the typical fate of foreigners landing in Korea in the period).

I recommend this book even to those without a specific interest in Korea. In some ways, the narrative most resembles those "stuck on an alien planet" tropes common to certain types of science fiction. That, in itself, makes it quite fascinating.

I have often joked that in my long-term residence in Korea, I have "emigrated" to one of those alien planets that so fascinated me when I was younger. This book captures the same idea. Korea of the present day is hardly alien at all, compared to the Korea of that era.

There is a twitter account that is a "bot" (an automated account that posts content according to a preset program rather than under human direction), called @unchartedatlas. It posts algorithmically-generated fantasy maps. All the objects (features, names, etc.) on the little maps it posts are randomly generated. Some of the maps are quite interesting. 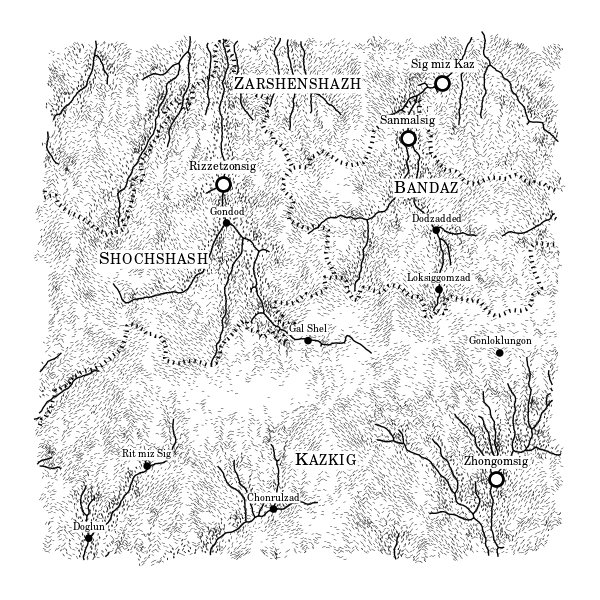 [Update: My friend Bob suggested I translate this into English, but retaining the nonnet form. I took the challenge:]