Things to remember. You're at BHC Alhambra Hospital, under Phil's gentle advocacy. You've elected to undergo electroconvulsive therapy [ECT] in an effort to banish lifelong demons. You want to learn how to be happy. Mara and the rest of the family love you. She expects you to call. Michelle loves you, although you are now separated, probably permanently. Jeffrey loves you and wants you to stay alive. Slick Willie is still president, Russia's economy is collapsing, Pinochet is under arrest for crimes against humanity, a former pro-wrestler, Jesse Ventura ("The Body") has recently been elected governor of Minnesota, and an independent (Reform Party) candidate. You barely survived a suicide attempt on Nov. 17th, following your apocalyptic departure from Pennsylvania and your family on August 17th, and a stay on Arthur's land in Alaska over subsequent months. Brother Bob has been calling every other day since your arrival in this hospital – a real friend, forever. Your cat, Bernie O'Higgins, has perhaps forgotten you but is nevertheless an affectionate, loveable beast. The world is a complex, beautiful place, Robinson Jeffers and Pablo Neruda were great poets, Cervantes' novels are nested maps of 17th century Spanish social space: Don Quijote 1 maps Spain, Don Quijote 2 maps the map, and Persiles maps the utopian vantage point from which the first two maps are drawn. That was the germ of your never-embarked-upon Ph.D. thesis on Spanish Literature at the University of Pennsylvania. Hang in there, people believe in you. Now: believe in yourself. You like to read, build sandcastles, view art, contemplate teh philosophical meanderings and layerings of Gilles Deleuze / Felix Guattari. You will return to the hospital this afternoon, and undergo a second treatment on Wednesday morning. Some of the patients on the unit, known as Thanatotopia, are decent people. Pedro Páramo is dead. Also, don't forget you're doing C-track – you might want to go.

I wrote this while among the dead. My paper journals from this period are precisely dated and have multiple entries from each day.]

I got two handouts in group. One made me angry. I drew doodles and notes all over it. 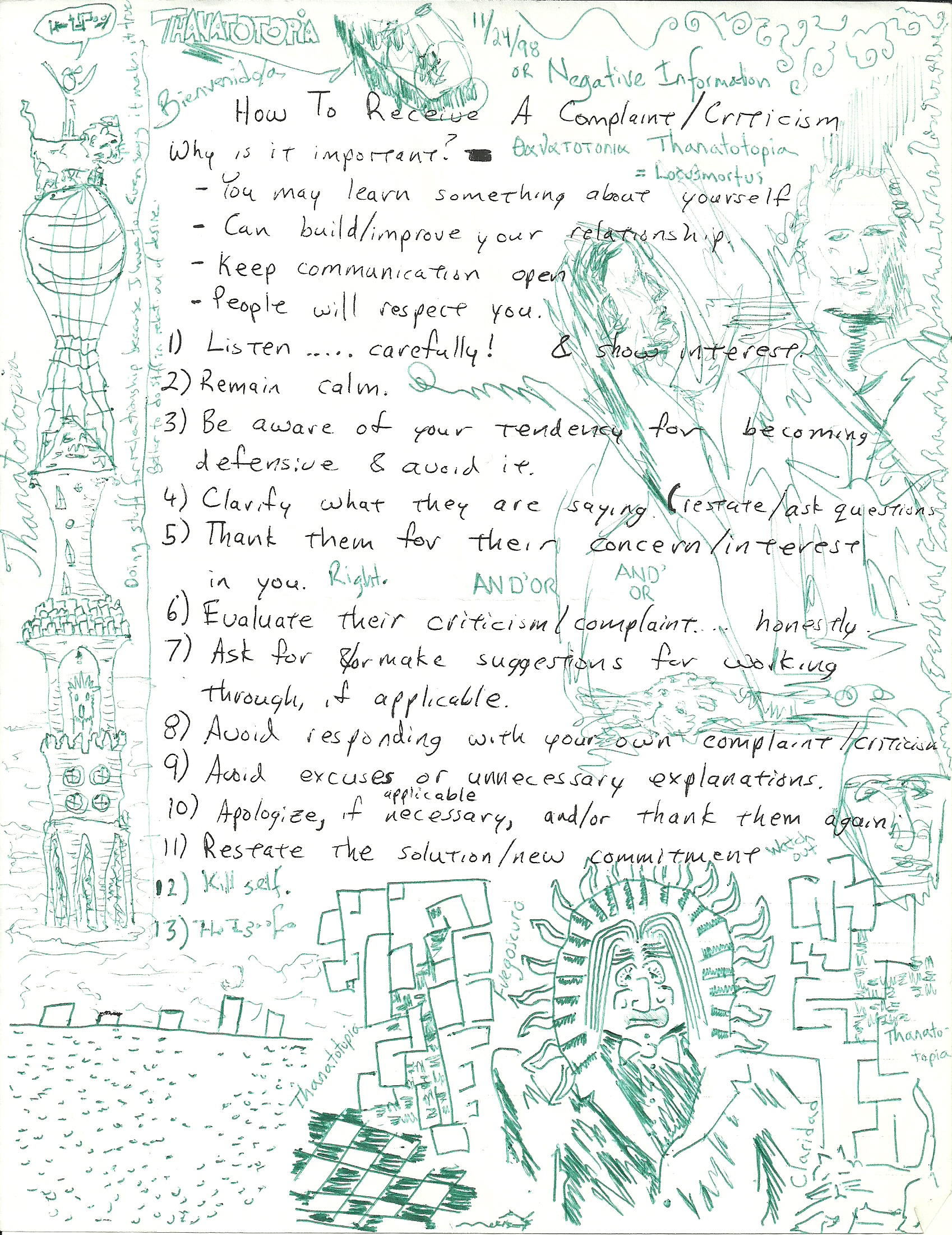 Here is the other one. I actually see use in this one. I copied it into my journal. Get it?

1) Pick an appropriate journal for you:
– One that you like
– Convenient for you
2) Schedule a routine time every day for journaling.
– But don't limit yourself to journaling at this time, journal also at particularly tough times.
3) Know the important journaling topics:
– Target areas
– Thoughts
– Feelings
– Physical symptoms
– Behavior
4) Review your journal to look for patterns
5) Make journaling fun!
– Reward yourself
– Use fun resources: Newspaper clips; Ticket stubs; Poems, song lyrics, etc.
6) Also journal about the positives
– Especially things that you've learned

I wrote this while among the dead. My paper journals from this period are precisely dated and have multiple entries from each day.]

This is the day I died.

[The "retroblogging" project:  the link above points to the lowest point.  Or maybe it's just fiction – I make no assertions.]